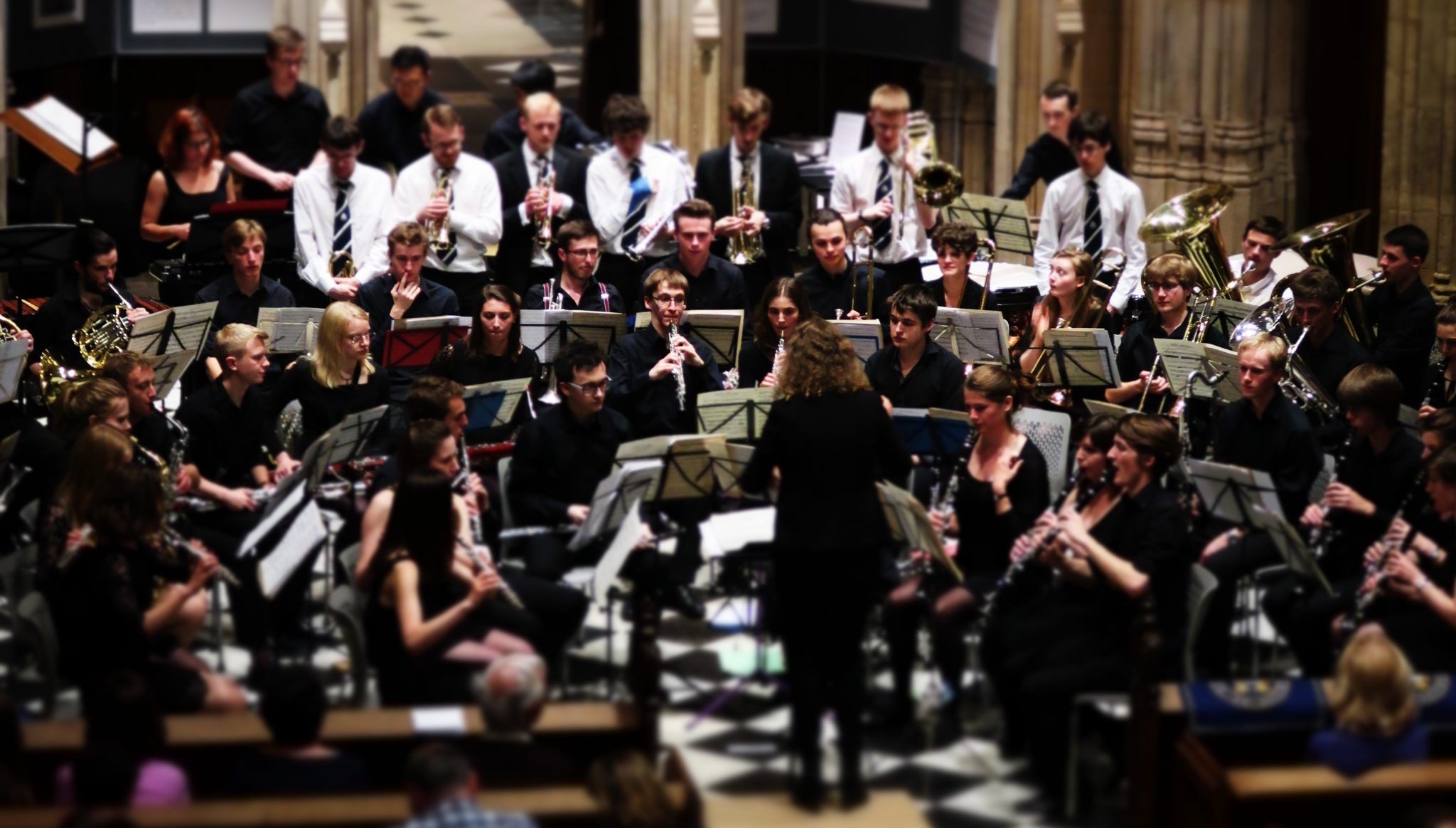 Once upon a time, the Oxford University Brass Band (OUBB) and the Oxford University Wind Orchestra (OUWO) combined forces to deliver an evening of music based on fantasy and make-believe. The performance featured a varied repertoire of old and new, light-hearted and serious, understated and ornate – and the results were magical indeed.

The Once Upon A Time concert took place on Saturday 28th May in the University Church of St. Mary the Virgin. As its title suggested, it was to be a concert of stories told through music. The selection of pieces enticed the imagination – it was no wonder that most of the composers featured had some link to film and cinema, given the vivid mental imagery which every piece inspired.

The performance was divided into two halves, with the Brass Band set to play five pieces in the first half and the Wind Orchestra four pieces in the second, and would culminate in a joint production of William Walton’s Crown Imperial. OUBB’s pieces were generally the less serious of the set, highlighting the whimsy in fantastical music, while OUWO’s choices looked more to legend and mythology. By the time OUBB took to the stage, the church was bustling with a crowd of expectant students and non-students alike.

As its title suggested, it was to be a concert of stories told through music

“Music is a social act of communication among people, a gesture of friendship, the strongest there is,” said Malcolm Arnold when asked about his compositions. OUBB proved this immediately with a lively opening performance of his 1967 composition Padstow Lifeboat. It’s a humorous and well-loved piece on the brass band circuit which was delivered with great energy by the brass band. The running motif of a foghorn throughout the march evoked smiles from the audience and the players alike, conjuring a mental image of a stately old lifeboat bumbling across the sea. 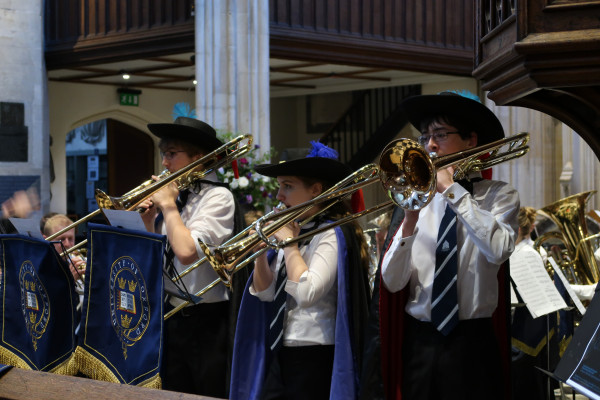 The band certainly made the most of the comic potential in the fantasy theme, with lead trombonists James Fallon, Josh Rackham and Rebecca Weare disappearing briefly before Trevor L. Sharpe’s Blades of Toledo to reappear as The Three Musketeers. Much like the rapiers for which Toledo is known, the three produced a clean and cutting sound at the helm of the band as it raced through the Spanish-inspired piece.

Indeed, OUBB as a whole have sounded more polished and professional throughout this year – I first saw them perform a year ago, and though I was not disappointed then, their sound has noticeably improved. This can partially be attributed to the skilful leadership of its conductor, Myrddin Rees Davies, who was awarded the prize for Best Student Conductor at this year’s UniBrass championships. From guiding the band in an unplanned hymn while waiting for a stray flugelhornist to leading a new composition by soprano cornet player Freddie Meyers, Rees Davies proved himself to be a capable and dynamic director. 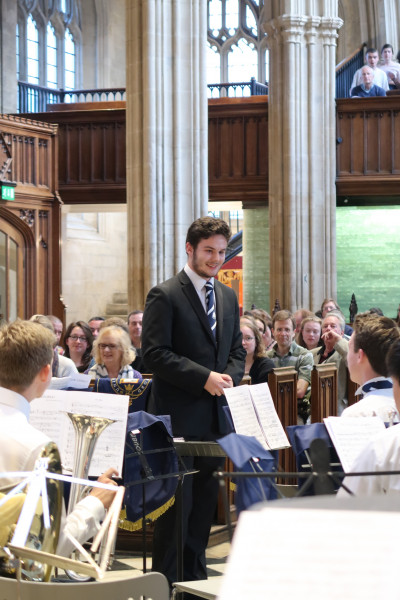 Despite the wide-ranging repertoire, which explored various sides of fantasy and fairytales, the performers still added in a couple of pieces which were not in keeping with the theme. The most touching of these was an impromptu performance of Abide With Me, dedicated to the victims of the Manchester attack last week. The moving lament filled the church fittingly, and was as expressive in its simplicity as the more technically challenging showpieces in the programme.

Meyers’s original composition, Griffin, showed off the band’s capability with fast-paced work. Meyers, a second-year musician at St Hilda’s, should be commended on his achievement – while Griffin sounded distinctly modern compared to the other pieces on display, it fit well into the repertoire and complemented the more traditional marches. Eric Ball’s 1957 piece Devon Fantasy was played next, reminding the audience of the sea’s more sombre and mysterious qualities after the humorous Arnold piece at the start. While the rest of the OUBB’s performance reflected the more whimsical side of fantasy, the Meyers and Ball pieces worked well in tandem to show that the players were as comfortable in the serious compositions as in the silly.

The band’s solo set finished with an ambitious rendition of Goff Richards’s A Disney Fantasy, a compilation of Disney classics. The percussion section throughout the concert was outstanding, but it particularly shone here as Will Medcalf created the playful backbone of the piece on the drums. The familiar tunes of Pinocchio and Mary Poppins were instantly recognisable, and the short snippet of When You Wish Upon a Star was led by a beautifully lyrical cornet solo. In the Jungle Book section of the medley, the musicians who weren’t playing made riotous monkey noises – the band added the fun to the fantasy, and were quite obviously enjoying it too. 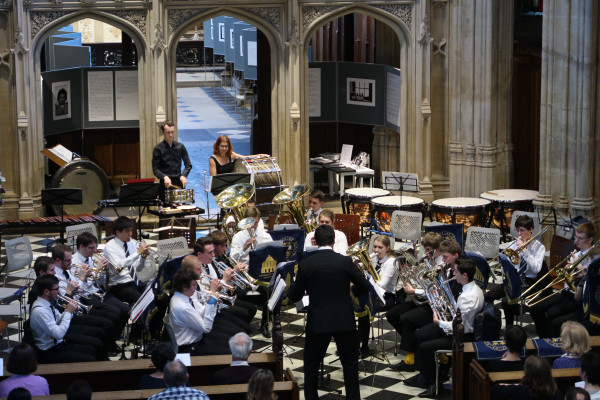 The Oxford University Wind Orchestra kicked off their half of the concert after the interval with the oldest piece in the programme, Nicholai Rimsky Korsakov’s Concerto for Trombone and Military Band. Trombone soloist Rebecca Swanson showed great technical skill, particularly in the final Allegro-Allegretto movement of the piece, and was backed by a competent cohort of players. The orchestra were energetic in their accompaniment to Swanson’s solo, rallied by the enthusiastic direction of conductor Chloe Rooke.

Rooke commanded the orchestra with confidence and made the management of 48 players (and later the greater numbers of OUBB and OUWO combined) look effortless. Her expressive style of conducting was reflected in the depth and feeling of the sound produced by the musicians. OUWO has also developed a stronger sound under Rooke, and the ensemble was on top form in this programme. Her smiles at each powerful crescendo, and the satisfied nods towards her players at the end of each piece, seemed to show her immense pride for how far the orchestra has come. 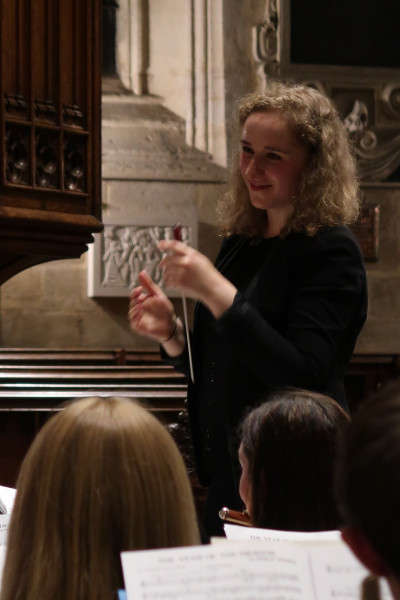 Nowhere was this more apparent than in the exceptional performance of Steven Reineke’s The Witch and the Saint. Though this tone poem was one of the less technically demanding pieces of the night, it allowed the orchestra to put storytelling at the forefront of their performance. This encapsulated the repertoire’s theme, which the musicians vividly brought to life with their emotive playing. The score grants independence to instruments which are sometimes overshadowed in other works – the tenor saxophone, euphonium, horn and bass clarinet all had solos – and this worked in OUWO’s favour as each section delivered. The percussionists excelled, giving the dramatic piece its edge and setting the medieval scene of the poem with ominous bells and chimes.

Both were loud, exciting pieces, posing a technical challenge to the musicians which was amply met

OUWO continued to represent the more mythical side of fantasia with Robert Jager’s Heroic Saga and Philip Sparke’s The Year of the Dragon. Both were loud, exciting pieces, posing a technical challenge to the musicians which was amply met. The brass section shone in the Jager, while the wind section were equally impressive in the Sparke – the skilful duet between Anna Fletcher and Melissa Morton in the second movement of The Year of the Dragon, on clarinet and flute respectively, exemplified the orchestra’s coordination and closeness as a team. Once more, this piece showed the musicians’ rare ability to conjure powerful imagery through their music – it was no surprise that Rooke punched the air at its conclusion! 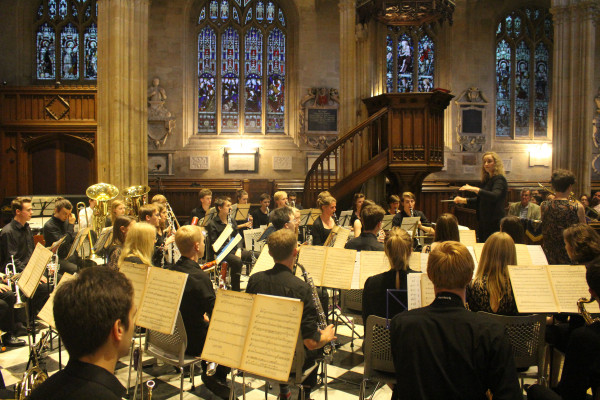 The grand finale of the concert came in a joint performance of Crown Imperial between the two groups. Both ensembles blended together without issue, and under the competent direction of Rooke, they produced an impressive production of the orchestral classic. The piece was antiquated compared to the more modern pieces which had already been performed, but it was immediately obvious why Walton’s work inspired John Williams’s score for Star Wars – it was an imposing and regal march which filled the church with glorious sound. Once the piece reached its ringing conclusion, it was greeted with rapturous applause from the audience, with some rising from their seats to give the two ensembles a standing ovation. The sound was huge, the repertoire was wide-ranging, and the performers themselves looked thrilled to be there – all of which made the night a truly memorable performance.

“I don’t think it was loud enough,” joked Rooke after the lengthy applause at the concert’s end. The music had truly shaken the rafters – multiple times throughout the performance, inquisitive passers-by had peered into the church porch to see where all the noise was coming from. Well, if they were looking for exemplary student musicianship, they came to the right place. The well-chosen theme gave both groups the opportunity to show off not just their lyricism, but also their endearing closeness as friends and thus their togetherness as musicians. The sound produced was of as rich a quality as any student concert I have seen in Oxford, if not better, and I look forward to seeing wherever the talented musicians of OUBB and OUWO go next.