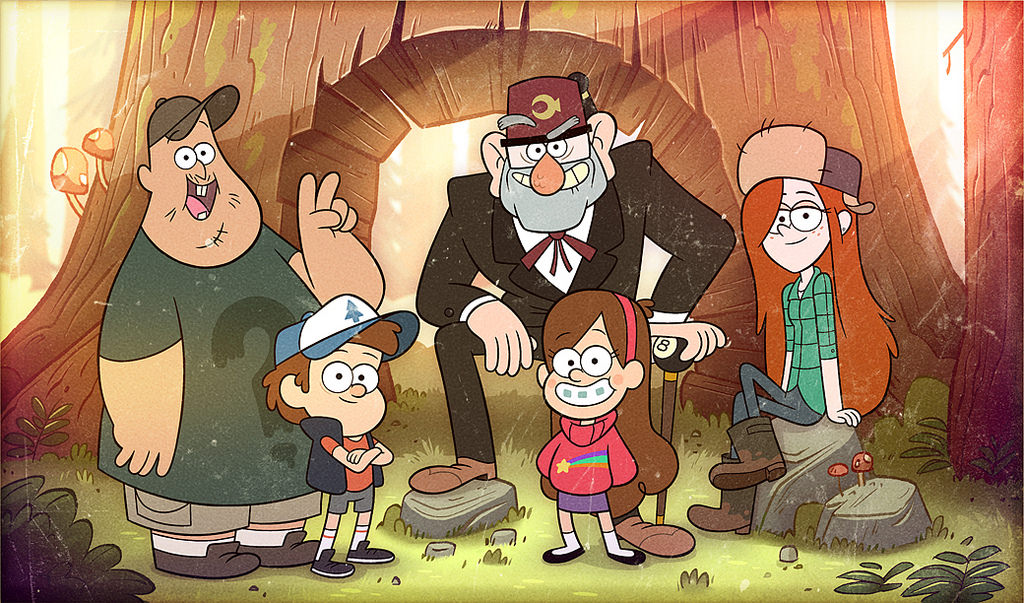 When it comes to TV, I’m not a particularly emotional person. I’m not saying I don’t appreciate a show with emotional depth or enjoy a moving moment, but I’m never the sort to cry at stuff on screen. So it was quite surprising to me the other day that, upon reaching the series finale of Gravity Falls, I found myself breaking down in tears at multiple points during the episode. Just in case my masculinity hasn’t been crushed enough, bear in mind that this is a cartoon from the Disney Channel.

Gravity Falls doesn’t particularly seem like the sort of show to make an ostensibly grown man break down in tears. Created by Alex Hirsch, it revolves around 12 year old twins Dipper and Mabel, who are sent by their parents to spend the summer with their irascibly eccentric Great Uncle Stan in the sleepy town of Gravity Falls. Over the summer, they discover that Gravity Falls is a deeply weird place containing supernatural mysteries, strange creatures and even stranger people, and along with a colourful cast of friends endeavour to unravel the secrets of the town.

It sort of plays out like Twin Peaks meets Scooby Doo meets The X-Files, and like the latter show individual, self-contained little mysteries eventually coalesce into a surprisingly complex overarching mythology, although crucially unlike The X-Files it doesn’t all deteriorate into a sad pile of nonsense. Across two fantastic seasons, the show builds from silly adventures featuring gnomes and sea monsters to an epic fight for the fate of the universe when ‘Weirdmaggedon’ comes to Gravity Falls (though rest assured, this is plenty silly too, and contains a healthy dose of gnomes).

It’s a show that’s brilliantly funny, filled with bizarre non-sequiturs, blink and you’ll miss it visual gags and a sophistication to its writing that means it can be enjoyed by kids and adults alike without patronising either. Hirsch has a wonderfully unique comedic sensibility that embraces and affectionately ribs the genre tropes of sci-fi and fantasy, whilst also using them for some genuinely exciting adventures and surprisingly edgy content. There’s a certain darkness to Gravity Falls that can emerge particularly as the stakes get higher in the second season, and at times you’ll be shocked with what Disney have let them get away with.

All these aspects coalesce to create a show that’s intriguing, hilarious and exciting, but clearly there’s an emotional core that brings this all together. That’s nothing unusual in of itself – there’s few animations, or TV shows in general for that matter, that don’t have core emotional messages to root the comedy and adventures. But why did Gravity Falls affect me so viscerally where others failed? Two of my favourite comedies of all time, Parks and Recreation and Community, are both bursting with emotion, particularly in their finales, and that’s part of the reason why I love them both. But neither of them have even come close to making me cry, even Parks and Recreation’s finale, which is an hour of television firing on all emotional cylinders to get a reaction out of you. Saying goodbye to characters I’d watched for years failed to break the manly, steely resolve I’m famous for nationwide, but despite having binged Gravity Falls in a week or so, I was a mess.

I think it’s something to do with Gravity Falls’ fundamental themes. TV, particularly animation, tends to thrive on stasis. The Simpsons have stayed the same for almost 30 years, Bart will always be a rambunctious 10 year old, Lisa an 8 year old wise beyond her years and surrounded by mediocrity. The Simpsons addresses the issues that surround the perspective of these kids, but it never acknowledges the fundamental and universal truth of childhood – that it’s temporary. Gravity Falls, on the other hand, is hyper-aware of this fact and it informs its entire outlook.

The show is set across a single summer with Dipper and Mabel on the verge of their teens, and there’s always a sense that this will eventually come to an end. Whilst something like Phineas and Ferb uses the gimmick of being set across a summer to churn out 222 episodes (!), Gravity Falls benefits from a relatively concise and focussed 40 episode run. Particularly towards the end of the series, the inevitability of growing up and fears of the future dominate the minds of our heroes, and forms the emotional crux of much of Gravity Falls’ endgame. Whilst we know the childhood of other shows can last forever, both we as the viewer and the characters of Gravity Falls are keenly aware that this stage of their lives is coming to an end. There’s a sense of building emotional stakes to Gravity Falls that gradually escalates as we come to its end, and I think that’s part of what makes the finale so impactful.

On a fundamental level, Gravity Falls is a show about liminal states. Dipper and Mabel find themselves on the verge of their teenage years, about to take that next step of growing up but fearful of the future. Summer, and by extension the town of Gravity Falls itself, is a nebulous state of the in-between that perfectly encapsulates what those long summer holidays can feel like – seemingly endless in scope, but always unavoidably leading back to the real world and the change inherent to it. Gravity Falls’ finale didn’t make me cry because of character deaths or lost loves, it made me cry because it was a beautifully funny and touching representation of the fundamental transience of life, albeit one presented through the lens of a cartoon prominently featuring a pig called Waddles.

Its ending is melancholy in the true sense of the word, a sense of pensive sadness

In its closing moments as the kids leave Gravity Falls at the end of summer, the show hits us with that happy-sad pang of nostalgia not just for the kids’ summer but our own childhoods, but what’s so brilliant about Gravity Falls is that it acknowledges the necessity of the transience it presents us with. For Mabel and Dipper, growing up may be a terrifying prospect, but the show sees the beauty of the impermanence of life. The liminal town of Gravity Falls is filled with many residents trapped by the past in a state of arrested development, and it’s only by moving forwards and growing that they are able to achieve true happiness.

It’s a great lesson for kids watching the show, but I think it might be what spoke to me on a certain level as well. At the risk of getting even more self-indulgent than usual, I think for a lot of us university represents that liminal step between childhood and adulthood as Gravity Falls does for our heroes. Although tragically lacking in magical gnomes, university can seem a place of boundless possibility free from the realities of life, but the end is inevitable. Whether you visualise that as the looming spectre of finals or the terror of having to work for a living, Gravity Falls reminds us that growing up is inevitable, but frames it in a hopeful light. The show understands the fear we all have of moving onto the next stage of life and reminds us that it’s fine to feel nostalgia and sadness for the end of an era, but that we shouldn’t let this define us.

At the end of the day I think that’s why Gravity Falls affected me so much. Its ending is melancholy in the true sense of the word, a sense of pensive sadness. It’s not a despairing sadness, or one born out of grief and raw emotional wounds, but rather a sadness tinged with nostalgia and contemplation. Although it’s framed by exciting action, silly jokes and apocalyptic stakes, the core of the ending of Gravity Falls is focussed on the themes the characters embody. Focussing on the transience of childhood, and life in general by extension, is a great theme for the kids who watch Gravity Falls but it’s one that can be appreciated by all.

I implore you to watch Gravity Falls. It’s laugh out loud funny, features some of the best voice acting in the business and will intrigue you with its surprisingly in-depth mythology. The summer it depicts is an absolute blast, but if like me you’re rapidly approaching what might be your last long summer holiday, it might hit surprisingly close to home.