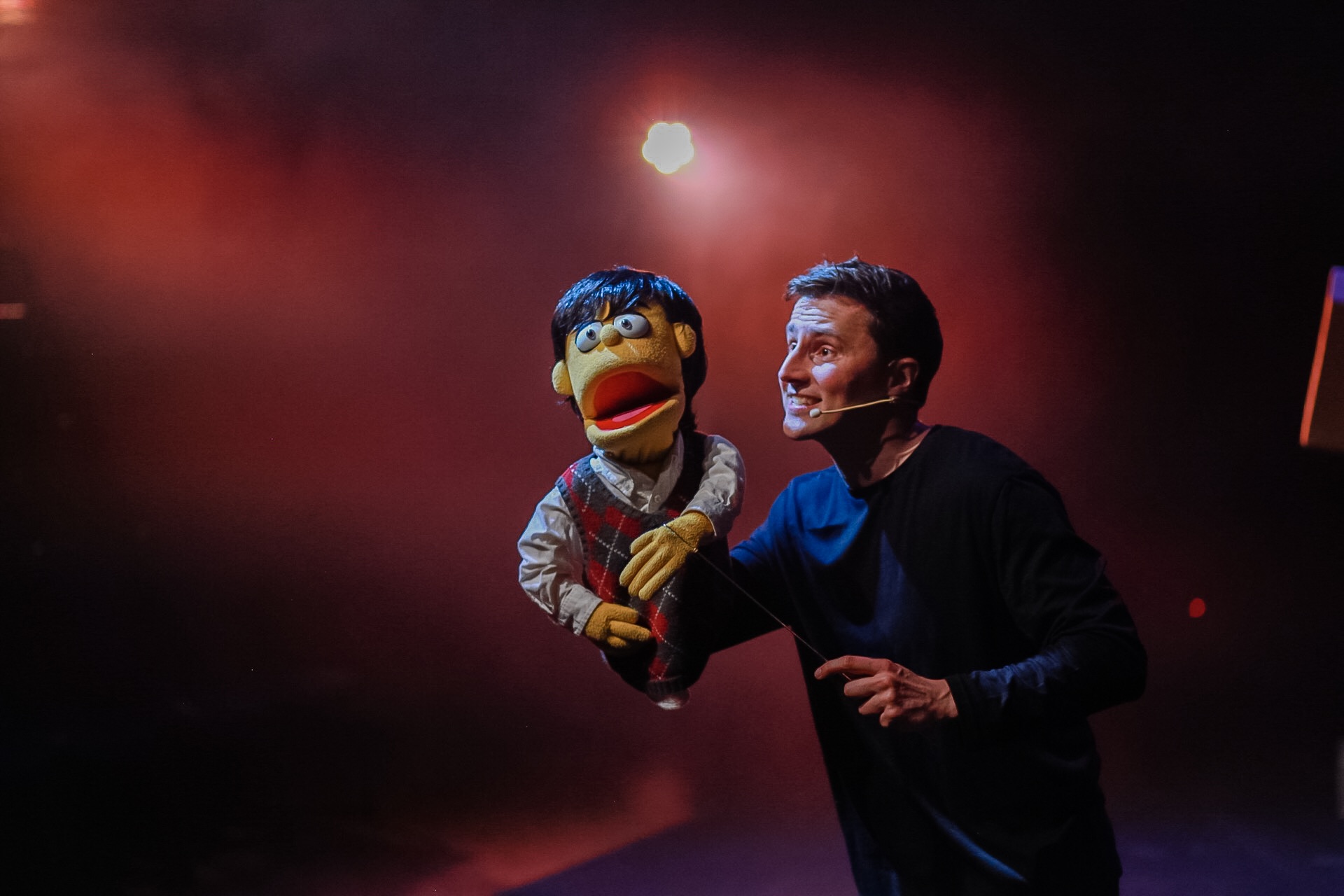 Avenue Q is a coming-of-age story with a twist: most of the characters are Sesame Street-style puppets.  The latest show from Oxford Operatic Society, Avenue Q combines catchy songs and skilful puppetry in a funny, affectionate take on the struggles of leaving college and entering the adult world.

The musical follows Princeton (Guy Grimsley), a young, hopeful puppet fresh from his English degree at Yale, as he leaves university and discovers that life isn’t quite as easy as he expected.  Unemployed and swamped by student debt, Princeton takes a room on Avenue Q, and soon gets to know the other residents: a colourful bunch that includes the Bad Idea Bears (Nicola Blake and Libby Holcroft), two fluffy, innocent-looking troublemakers who gleefully lead Princeton astray, and Kate Monster (Nicola Taylor), an idealistic kindergarten assistant with whom he falls in love.  As Princeton navigates the pitfalls of romance, and searches for a purpose in life, he is helped along the way by his cynical but well-meaning neighbours, and the musical cheerfully parodies the Sesame Street format to teach Princeton lessons about post-college life, rather than the letters of the alphabet.  It is in this absurd collision of childish puppets and more adult themes that much of Avenue Q’s comedy resides, but for all its satire and saucy humour, the storyline is surprisingly naïve, and the show ends on a note of hope.

Avenue Q, with its struggling but ultimately hopeful young characters, is a great musical for a student audience, who, like Princeton, may well soon be asking themselves ‘What do you do with a BA in English?’.

Both cast and musicians gave impressive performances.  The cast as a whole were remarkable for their strong voices, energy, and their ability to work their hand-puppet characters while singing and dancing.  The puppets were a delight to watch, and it was fascinating to see how the puppeteers, who were fully visible onstage, used emotive expressions and physicality to infuse them with life and character of their own.  The relationship between puppet and puppeteer seemed almost organic, each an extension of the other, and watching the show brought about a kind of double vision, by which it was possible to appreciate the puppeteers’ dextrous control of the puppets, and simultaneously to see them merely as a part of their puppet characters.  So vital was this relationship, that it was slightly unnerving to see the injured, unconscious puppet of Lucy the Slut lying motionless in the arms of her puppeteer (Kerry Hudson), while Hudson looked blankly out to the audience, the connection lost.  Elsewhere, the coordination between the puppets’ actions and the words and emotions of the story was highly effective, and credit must go to director Guy Brigg and his cast for the hard work they evidently put into perfecting it.

In the roles of Kate and Princeton, Nicola Taylor and Guy Grimsley did a great job.  Taylor portrayed Kate with a sweet, starry-eyed optimism, while her solo ‘There’s A Fine, Fine Line’ allowed her to convey Kate’s later sadness and frustration through expressive modulation of her voice.  Grimsley was likewise a strong singer, and gave an animated, humorous performance as Princeton, working well with Taylor to generate the comedy of the characters’ evolving relationship.  Other notable performances came from Emily Williams as Gary Coleman, a child star turned maintenance man of Avenue Q, with songs such as ‘You Can Be As Loud As The Hell You Want’ showcasing her powerful voice and impressive range, while Andy Blagrove and Marilyn Moore gave strong comic performances as Trekkie Monster and Mrs T.  The humour of the script occasionally felt a little behind the times, but the show as a whole was entertaining, and the talent and enthusiasm of the cast shone through in every line they spoke.  Avenue Q, with its struggling but ultimately hopeful young characters, is a great musical for a student audience, who, like Princeton, may well soon be asking themselves ‘What do you do with a BA in English?’.

Avenue Q is on at the Theatre at Headington from Wednesday to Saturday of 6th week.