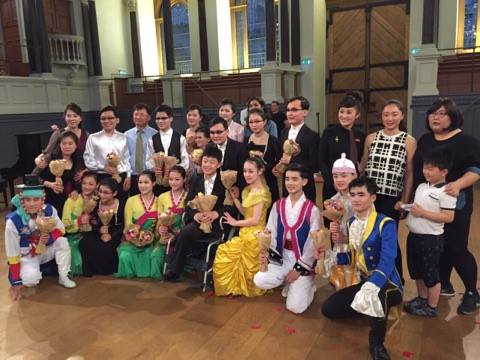 Sat in the Sheldonian Theatre on Friday night, I found it hard to grasp the enormity of the event I was at. I was sat before the North Korean Youth Para-Ensemble, in another country for the first time in their lives, on the first stop of their first tour, which also includes Trinity College, Cambridge and St. John’s Smith Square, London. DULA International is the charity responsible for their visit, and the only non-governmental organisation to be recognized in North Korea. They collaborate with the KFPD (Korean Federation for the Protection of the Disabled in North Korea) to improve the lives of those with disabilities. However, the distance between us, and the sense of otherness that their culture tends to signify, vanished as they began to perform.

The show commenced with a gentle song; a voice quartet entitled ‘Spring of My Hometown,’ performed by three young men in black suits and a girl dressed in contrastingly vibrant Korean dress. The passion with which they sang every lyric was really quite moving, as were many of the songs throughout the evening, especially their rendition of ‘You Raise Me Up’ combining both Korean and English lyrics.

Following the opening act was a gayageum solo. The instrument is Korean, reminiscent of a zither, and has twelve strings that make sounds that are simultaneously trembling and bold. Other noteworthy musical acts included the accordion duet, and the closing performance by the entire Para-ensemble, which also featured violins and a piano.

The dancers who burst onto stage intermittently brought with them energy and vitality that undercut the sober, albeit beautiful performances that preceded them. The dance acts were eclectic, featuring traditional fan dancing and ensembles with varying gender balances, all dressed in vaguely clown-like, distinctly vibrant costumes. Special mention must go to ‘Beauty and the Beast,’ a dance powerfully telling the story of Belle and Beast, over the course of the title song. The costumes were outstanding, with dancers dressed as the household objects, such as teacups and candlesticks that appear in the story. The Beast’s head was magnificent, with much being made of its removal towards the end of the dance.

For me, ‘Time to Say Goodbye’ stole the show, which Pae Ok Rim sang with sensitivity and richness that was hard to believe possible from a fourteen year old, her age receiving audible gasps as it was revealed at the end of the show.

Through the beauty of the music, and the wonderment at a culture so distant from ours, one begins to wonder if there is an agenda behind the Para-ensembles’ visit to the United Kingdom, and what it might be if there is. Perhaps the government wishes to demonstrate how well they treat their disabled, or display to their country pictures of Western applause. The government official, adorned with a pin badge featuring the face of Kim Jong Il, who declared that North Korea ‘will continue to engage in these exchanges,’ seems to provide evidence that their agenda is based in giving the impression of engagement with the rest of the world. It quickly becomes clear that it is impossible to know what North Korea are trying to do, and despite their visit, trying to understand their regime is still fruitless. All that is left to do then is to celebrate the talent of the performers, and go and see them if you can.

Album Review: A cure for the blues