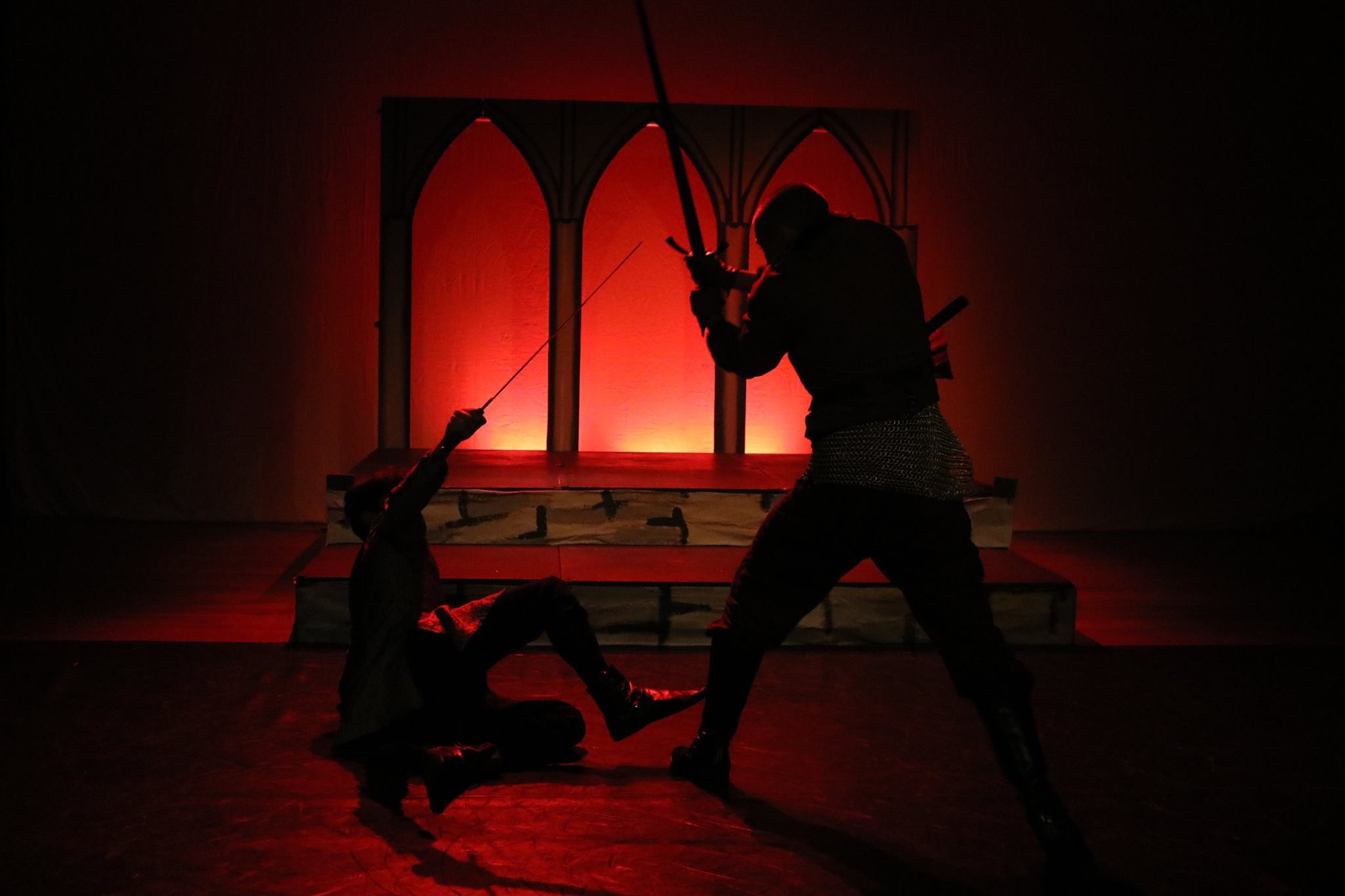 Henry IV part 1 is perhaps one of Shakespeare’s more confusing plays to follow: some prior knowledge of the Wars of the Roses may be helpful in order to keep straight which Henrys and Richards are who. It is a testament to the quality of FourSevenTwo’s production of this relatively obscure play, then, and to Miranda Mackay’s marvelous direction, that whether or not you’re clued in to the historical backstory, the play’s own merits shine through. The characters are well-drawn (and the excellent costuming by Hanna Høibø helps with keeping track of who is on whose side – the Northern rebels in leathers and furs, the Sassenach royalty and hangers-on wearing lighter, more extravagant clothes); the sound work of Nat Davies is extraordinary (a particularly nice touch is the effect which gives the King’s voice a noticeable, natural-sounding echo in the scenes set in Westminster Palace); and the fights, directed by veteran choreographer Jennifer Hurd, are truly incredible. This is not a play in which people who very obviously don’t know what they’re doing wave bits of painted wood at each other in trembling fashion: the actors looked confident and fought fast, and some sequences felt so brutal that several audience members gasped at each seeming blow.

It’s in the acting that the play really shines: three of the play’s four main characters, Hal the wastrel Prince of Wales and future Henry V, the fiery Harry Percy, leader of the Northern rebels and Sir John Falstaff, perhaps Shakespeare’s most famous and reliably funny comic character, were all played brilliantly. Hal’s role is a difficult one for any actor, it necessary is to convincingly portray an idle youth squandering his potential as well as a brave young knight fighting for what he believes is right, balancing the transition between the two, and this is managed effortlessly by Max Cadman – his Hal still has the same dance in his eyes at the end, that he did at the start but it’s one tempered by experience and willing to accommodate Falstaff’s fooling for old times’ sake only. Chris Page’s Harry Hotspur was truly frightening in his intensity, and the inclusion of a stutter emphasizes the character’s uncomfortable relation with words and familiarity with deeds, backed up with some skillful swordsmanship. Hotspur runs the gauntlet from a hilariously sardonic takedown of the mystical Welshman Owen Glendower and his very moving final scene, with a boiling anger filling the mid-point of his emotional spectrum, and Page delivers all these emotions with clarity and gusto.

Finally, Jonny Wiles as Falstaff delivered a brilliant performance, by turns scheming for betterment, putting on a ridiculous face to curry favour and falling foul of actual moments of dullness. His plummy voice, gout-laden walk and puffs for breath contrived to put him more comfortably into the skin of his role than anyone else on the stage. Falstaff often steals the show, and although the ensemble here was strong enough to keep up with him, his was certainly a marvelous performance. Other actors also carried their roles well, particularly Jack Doyle as a mischievous Poins and Anusia Battersby as a fiery Lady Percy, loving her husband even as she clashes with him; particularly notable throughout was every actor’s comfort with and even joy in the language, a make or break feature of any early modern play.

There were a few minor faults – the performace of Henry IV himself’s was perhaps one, delivering his lines in a persistent and angry bark. Another being the minimal set and lighting, which got the job done without distracting from the action but which didn’t really add to it either. However, these in no way detract from the excellence of this play, and I would wholeheartedly recommend it.