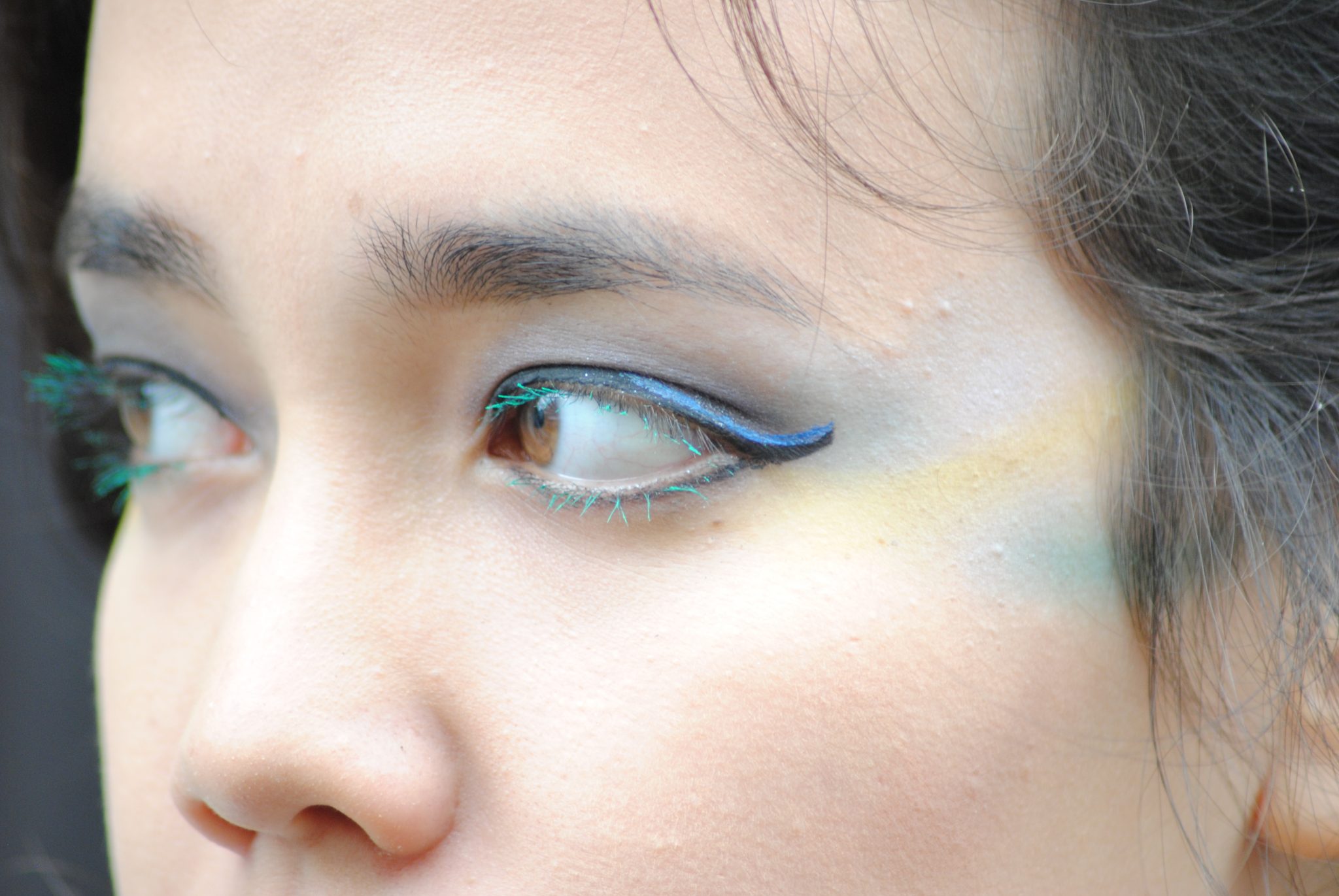 Prostitution, social class and legal regulation in the history of makeup

The use of makeup throughout history has had its ups and downs. It often symbolised prostitution or social class, and even underwent serious legal regulation in England from the 1500s. The makeup we see on the streets today has come a long way from the earliest use by our ancestors.

Our story begins with ancient Egypt where makeup use primarily denoted social status rather than gender.

Make up was commonly used as remedies to treat wrinkles, scars, and burns. To improve bad breath the ancient Egyptians chewed herbs, frankincense, or liquorice root stick (which is still in use today). Embalming mummies is, of course, widely known. But it is less known that remedies for baldness and greying hair (with a mixture of beeswax and resin) were also used on the mummies. They believed it would make them irresistible in the afterlife.

Other aspects of cosmetics, namely nail polish, arose around 3000 BC. Chinese people began to tint their fingernails with gum arabic, gelatine, beeswax and egg white. Here, the colours used represented social class. For example, in the Chou Dynasty (circa 1000 BC) royals wore gold and silver, and later wore black or red. The lower classes, however, were forbidden to wear bright colours on their nails.

Around 1000 BC, in Ancient Greece, the meaning of makeup shifted from social status to femininity. Lipstick, especially, became largely the domain of prostitutes. They used ingredients ranging from dye and wine, to sheep sweat, saliva and crocodile excrement (…lovely).

It was in the context of lipstick and prostitution that the first formal regulation arose. The first law focused on lipstick’s potential deception of men and undermining of class divides rather than on its safety for women. Under it, prostitutes who appeared in public either at the wrong hours, or without their designated lip paint and other makeup, could be punished for “improperly posing as ladies”.

At the height of the Roman Empire, makeup was at high popularity and low regulation. Makeup denoted purely social status, with the colour of lip paint that men wore generally indicating their social standing and rank.

The Roman philosopher Plautus (254-184 BC) wrote, “A woman without paint is like food without salt.” But, he was a dramatic playwright and it would explain his preference for a “painted woman”. But this also suggests that makeup wasn’t purely used for the display of social class like it may seem.

Romans widely used cosmetics by 100 AD. Kohl was used for darkening eyelashes and eyelids, chalk was used for whitening the complexion, and rouge was worn on the cheek.

In the Middle Ages, from the 5th to the 15th century, there are only a few records of the use of makeup. There are writings of churchmen who objected to the use of it. Yet, it remained in use by females and free from regulation of law.

Pallingston, a historian, states that “in England, a woman who wore makeup was seen as an incarnation of Satan” because such alteration of her face challenged God and his workmanship. This view of makeup continued.

The belief that makeup had magical powers was perpetuated even by Queen Elizabeth I herself. This caused uproar from both the Church and the State who deemed its application sinful and women had to address their use at confession. One text declared cosmetics usage a mortal sin unless done “to remedy severe disfigurement or so as to be not looked down upon by [one’s] husband”.

People believed lipstick could work magic and possibly ward off death. Queen Elizabeth I credited it with lifesaving powers and applied it when she fell ill. She died with nearly a half-inch of lip rouge.

The Queen had made her own crimson colour with a combination of cochineal, gum arabic, egg whites, and fig milk. It is also believed that she, or one of her close associates, invented the lip pencil. This was made of ground alabaster, or plaster of Paris, with a colouring ingredient, rolled into a crayon shape and dried in the sun.

Parliament eventually stepped in. It made a law declaring using makeup to “deceive an Englishman into marriage” was “punishable as witchcraft”. This was the first formal lipstick regulation since Ancient Greece.

The link of makeup to sexuality and femininity in modern society is ever-present, and it is hard to find a balance between looking like prostitutes, or as movie stars, to fit in society’s tick-box.

The demonstration of social class persisted through 1600s. Different classes wore different colours of lipstick but mostly due to the cost of ingredients. The upper classes wore a bright cherry red; the lower a cheaper ochre red. Gentlemen wore makeup too, and the link to femininity faded even more.

In 1700s, Parliament declared that women who seduced men into marriage through the use of makeup could have their marriages annulled as well as face witchcraft charges: “All women of whatever age, rank, profession or degree, whether virgins, maids or widows, that shall, from and after such Act, impose upon, seduce and betray into matrimony any of His Majesty’s subjects, by the scents, paints, cosmetic washes, artificial teeth, false hair, Spanish wool, iron stays, hoops, high-heeled shoes or bolstered hips, shall incur the penalty of the law in force against witchcraft and the like misdemeanours and [their] marriage[s], upon conviction, shall become null and void.”

This shows the extreme constraints women were put under. If even wearing “high-heeled shoes” led to being punished as a witch, there was not much enhancement and freedom to use cosmetics (or anything). Men, as delicate little flowers, obviously needed to be protected from “bolstered hips” and too nice “scents”.

The culture of Victorian England had bloomed with a craze for nature and natural beauty in 1800s. As a result, lipstick and makeup were highly condemned. Queen Victoria herself declared makeup “impolite” publicly, and it became socially unacceptable for all but prostitutes and actresses.

By the 1880s makeup was again acceptable: women tended to wear lead-based heavily perfumed face powders to achieve a pale look. Sali Hughes, in her book Pretty Iconic, explains that T. LeClerc worried women were poisoning themselves and made an alternative with zinc oxide, rice starch, coloured pigment, and talc, available in different shades. This is still available currently, and she explains “it remains a cult favourite today, reinvigorated by the trend for colour corrections” and the “unstoppable shift towards contouring”.

The emergence of better ingredients in the late 1800s, and the surge of movies with heavily made up actresses led to a boost in popularity and sales of commercialised makeup.

In 1909, L’Oréal was founded and is now the largest cosmetics corporation in the world, present in more than 130 countries. It also now arguably has a monopoly over the cosmetics industry, owning or sharing in some of the biggest names in makeup: Urban Decay, YSL, Lancôme, NYX, Maybelline, and Garnier, amongst others.

In 1923, the first twist up lipstick in a tube appeared. In 1933, Revlon was founded by Charles Revson and his brother Joseph along with a chemist, Charles Lachman, who contributed the “L” in the name. Together, they used pigments instead of dyes and created a unique manufacturing process.

Queen Elizabeth II herself got involved with the 19th century lipstick craze. She commissioned her own lipstick shade (a soft blue-red) to match her coronation robe called ‘The Balmoral Lipstick’ named after her Scottish country home.

One of the most well-known makeup brands, M.A.C., has risen in ranks relatively quickly. It was founded in 1984 by two men named Frank (Frank Toskan and Frank Angelo) who were frustrated with the lack of colours that would shoot well with photography.

I end with this: it is often though that the revolting nature and history of makeup is behind us. Yet, there are common ingredients today that are just as shocking. Fish scales are prominently used in shimmery makeup, crushed beetles in nail polish and lipstick, hardened whale vomit in perfumes, and snail goo in face creams. Perhaps we haven’t stepped as far from our ancestors as first thought.

Clearly, the use of lipstick has been the most prominent throughout history. A bright pop of red could apparently deceive men so much that they had to be legally protected, because women were either seen as witches or as prostitutes. The popular meme of “take your girl swimming on the first date” comes to mind, and the oppression of women through makeup is still perpetuated. The link of makeup to sexuality and femininity in modern society is ever-present, and it is hard to find a balance between looking like prostitutes, or as movie stars, to fit in society’s tick-box. At least we’re no longer being punished for looking too good…