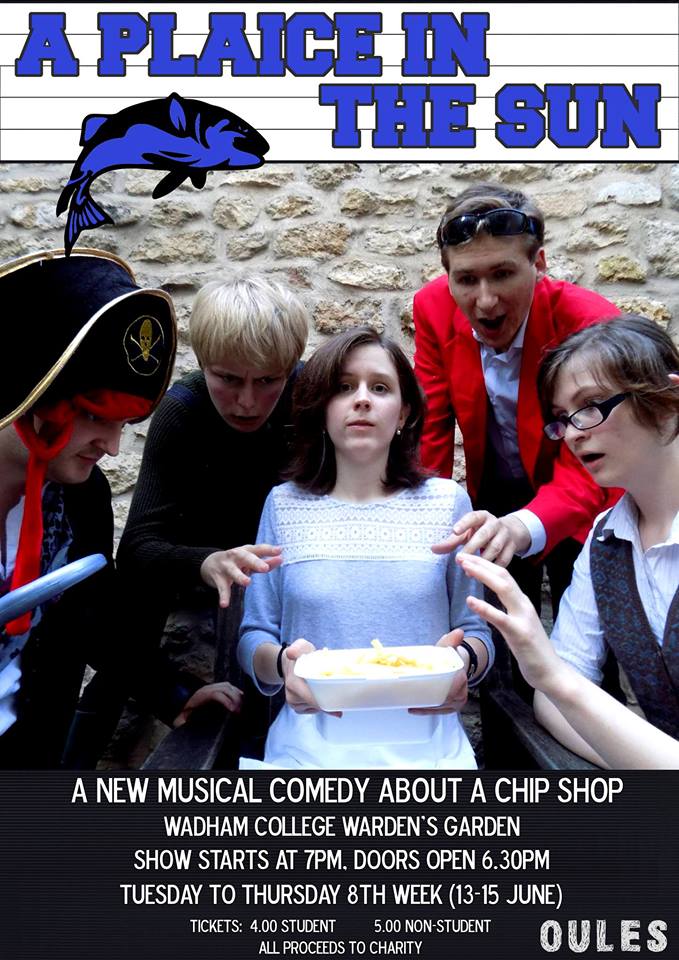 The Oxford drama scene has nurtured some of the finest acting talent in Britain, the hallowed training ground of artists as varied as Hugh Grant, Rosamund Pike and Tom Hooper. It is a Serious Business. Legend has that one particular Oxford dramatics society has fostered the talents of both Rowan Atkinson and Oscar Wilde. Yet when I ask their president, Jake Griffiths, for the motivations behind his involvement, I am not met with a tale of hungry ambition for the dizzying heights of thespian fame, but an event familiar to us all: “I saw someone at Fresher’s Fair dressed in a moose onesie shouting ‘Amateur Dramatics!’ and I thought ‘That sounds like my sort of society!’”

Oxford University Light Entertainment Society, or OULES, positions itself as the clown to OUDS’s tragic hero, the madcap, comic sidekick to Oxford’s illustrious drama scene. It is an informal, vibrant, goofy society firm in the belief that “acting with friends is always more fun, and when the actors are enjoying themselves, the audience will have more fun watching them perform.”

“I saw someone at Fresher’s Fair dressed in a moose onesie shouting ‘Amateur Dramatics!’ and I thought ‘That sounds like my sort of society!’”

Jake tells me the secret behind their effervescent humour: “our rehearsals are slightly unusual in that we have the whole cast and crew there for each one. We start by playing a few silly improv games and then the directing team will choose scenes from the show to rehearse depending on which members of the cast are able to make it. I think this format is part of what makes OULES so much fun, with everyone there, you can get to know the whole society. In a lot of other productions, you will only meet the people that you are in scenes with for rehearsals and might not see anyone else in the production until show week.”

I hear tell of an “after-rehearsals-pub-trip”, where the old stereotype of cutthroat thespians desperately eyeing each other up as they vye to be the next Hamlet is replaced in favour for a drink and a laugh. This is in keeping with the ethos of the society as a whole; Jake assures me that “the great thing about OULES is that it is available for anyone and everyone! It doesn’t matter about your acting ability or experience, if you want a part, you can have a part. In the past we have had to write in extra roles because we had such a massive turn out for auditions and there just weren’t enough to get everyone involved. We have the same attitude towards the production team. If you’ve never directed anything before, you can still give it a go! We have a lot of experienced people on hand to give any support that might be needed, giving people the chance to do something that they may not have been able to try.”

Involvement is relaxed; “we will send out an announcement inviting anyone and everyone to come and audition and then rehearsals are two evenings a week all the way up to the show.” With such a large and enthusiastic talent pool, quality is not compromised as “everyone is always around to help out where they can. Be it helping to block a particularly tricky scene, choreograph a fight, or give some pointers for singing a solo. There is always someone around who can lend a hand, and everyone getting together for rehearsals means that they’re available to help should anyone need it.”

Yet despite their habit to always see life with vibrant optimism, OULES is not blind to the unavoidable anguishes of the human condition. Sometimes life simply does not go the way you want it to, but, life, like shows, must go on. In OULES, you are encouraged to take those moments of unmitigated despair and turn them into a celebration; indeed, their annual awards ceremony, the Flosscars, grants, among its more traditional honours, such laurels as ‘Best Worst Line-Learner’ and ‘Best Cock-up.’ Jakes tells me that “some of my personal highlights have been during the final night of a performance. It is OULES tradition that, on the final night, there is a bit of ad- libbing from our actors. Be it meta references, terrible puns or (in extreme cases) audience participation. It’s always great fun seeing what the actors will come up with and there is even a Flosscar category for best Ad-Lib.”

OULES proves that not all the serious things in life must necessarily be solemn. In the past, it has put on shows for those unable to travel to the theatre, taking their productions to special needs schools, hospitals and retirement homes. Jake is keen to continue this tradition, planning to work with the OULES Homes and Schools Officer to extend their reach to more of the disadvantaged. As a non-profit society, for “each show, the whole society votes on where the proceeds should go. We take nominations from everyone and then donate our profits to one or two of them. Recently, we have donated a variety of local, national, and international charities, including the Oxford Homeless Project, the Migrant Offshore Aid Station, and the British Heart Foundation.”

And what of the immediate future? “As always, we are putting on a show during 8th week this term, a garden play entitled “A Plaice in the Sun””.

A Plaice in the Sun plays in Wadham College Gardens in 8th Week.