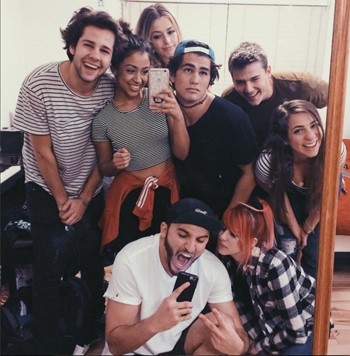 Welcome to this issue’s instalment in ‘Indie Dive’, a series that delves into the recesses of the independent film world and pulls out a gem. Each Indie Dive column spotlights a lesser known indie film, hopefully convincing you to add it to your film queue. The final instalment of Indie Dive, however, will differ from the usual format by taking a look at a different medium. Part six of the Indie Dive series brings you YouTube vlogs.

In general, vlogging on YouTube involves making videos that follow YouTubers in their daily life. Disclaimer: certainly not all of life goes into the vlog, and it wouldn’t even be safe to say that all of what is in the vlog is part of life. Nonetheless, vlogs, typically filmed with handheld cameras, have a less polished feel and generate greater intimacy between the creator and the audience. David Dobrik’s particular vlog style is intriguing, as the line between scripted and unscripted blur by introducing short comedic sketches, where his friends and fellow vloggers often embody different personas or play skewed versions of themselves.

Jason Nash – Jason is a 44-year-old comedian and vlogger who lives with Scott and Todd (did I mention that these vloggers live with or near each other? It’s great). When you watch the vlogs, you will understand why Jason’s age is the first thing I mentioned, especially given the fact that the rest of these vloggers are in their 20s. Nonetheless, Jason’s talent and wit make him fit in perfectly with the rest of the group. In David’s vlog he plays the part of the bad father (he has two children), but is certainly not in real life, and actually seems very sweet. Also, Jason’s vlog intro is one of the best things on YouTube.

Zane Hijazi – Zane (like everyone else in this group) is hilarious. His vlogs are typically longer than David’s are, and feature a good balance of skits and less scripted content.

The Gabby Vlogs – Arguably, Gabby is not primarily a vlogger, as she has a main channel where she uploads ‘story time’ videos and other comedic content. Nevertheless, check out her vlog channel as well as her main channel.

Big Nik – Like many of these vloggers, Big Nik started on Vine then transitioned to YouTube. His vlogs also include some scripted content and have more recently featured some pranks.

Scotty Sire – Scotty’s vlogs are also more long-form and have fewer scripted components. At the end of his videos he (up until very recently) performed a short rap for his “shout-out of the week” (a fan who has his notifications on across all social media platforms). While many YouTubers have shout-outs of the week, Scott is the only one I know of who went through the effort of writing each one a rap. Though he will no longer be featuring the raps, his dedication is certainly still appreciated.

Carly & Erin – Carly and Erin are a duo (who also live together, are you sensing a pattern?) who vlog together on one channel. Their vlogs are perhaps the least scripted of the bunch, and usually involve them opening the interesting and impressive P.O Box gifts they receive from fans.

Toddy Smithy – Todd’s vlogs chronicle his life more closely than the rest of the groups, and thus tend to be less scripted than the other vlogs in this friend group. Also, his videos have more recently been featuring musical interludes/ sequences and interesting editing components.

Heath Hussar – Heath (who lives with Zane right now, but used to live with Scott and Todd as well in their old house – this is confusing I know, but bear with me) only recently created his own vlog channel. In addition to vlog footage, Heath’s content also includes cooking tutorials.

You might wonder: do I have to watch the vlogs of all of these YouTubers? And the answer is: YES, UNLESS YOU WANT TO BE A FAKE FAN!

While that last part was (slightly) in jest, I do feel the need to enumerate some of the advantages of watching vlogs from the entire group. As different people play different personas in different people’s vlogs, watching all of the vlogs gives you a better understanding of each of the members of the group. For example, David’s vlogs are probably the most scripted of all the vlogs and are the shortest in runtime. Having a deeper understanding of the jokes and of the people in the vlogs would be best served by watching the vlogs of the other people in the group that include fewer scripted conversations as well as personas truer to life. But certainly the biggest reason to watch all of the vlogs is the simplest: they’re entertaining. Each person in the group has a different vlog style, and even on days when most of the vlogs include footage from the same event, the take is always sufficiently different and interesting.

Overall, if you are interested in comedy, social media, or simply interested in people, you should consider watching the vlogs of the YouTubers mentioned here. Start small, and as you fall in love with each person, start watching their vlogs too. The comment sections alone sometimes make the video worth watching. Plus, the more immersed in this world you become the more inside jokes you will understand and the greater the bond you may feel with the other viewers.

Vlogging is an interesting medium and the psychology of vloggers is certainly fascinating. So be sure to follow each of the vloggers spotlighted here (and turn off your ad block).

To get you started, here are a list of videos of from each YouTuber that I would recommend:

1) CAUGHT THE PEOPLE WHO STOLE OUR CAR

1) COUPLES WOULD YOU RATHER!! With David and Liza

2) Reminiscing on our Time as Roommates (Try not to Cry)

You know what we’ve read this summer? A Tale of Two Cities by Charles Dickens