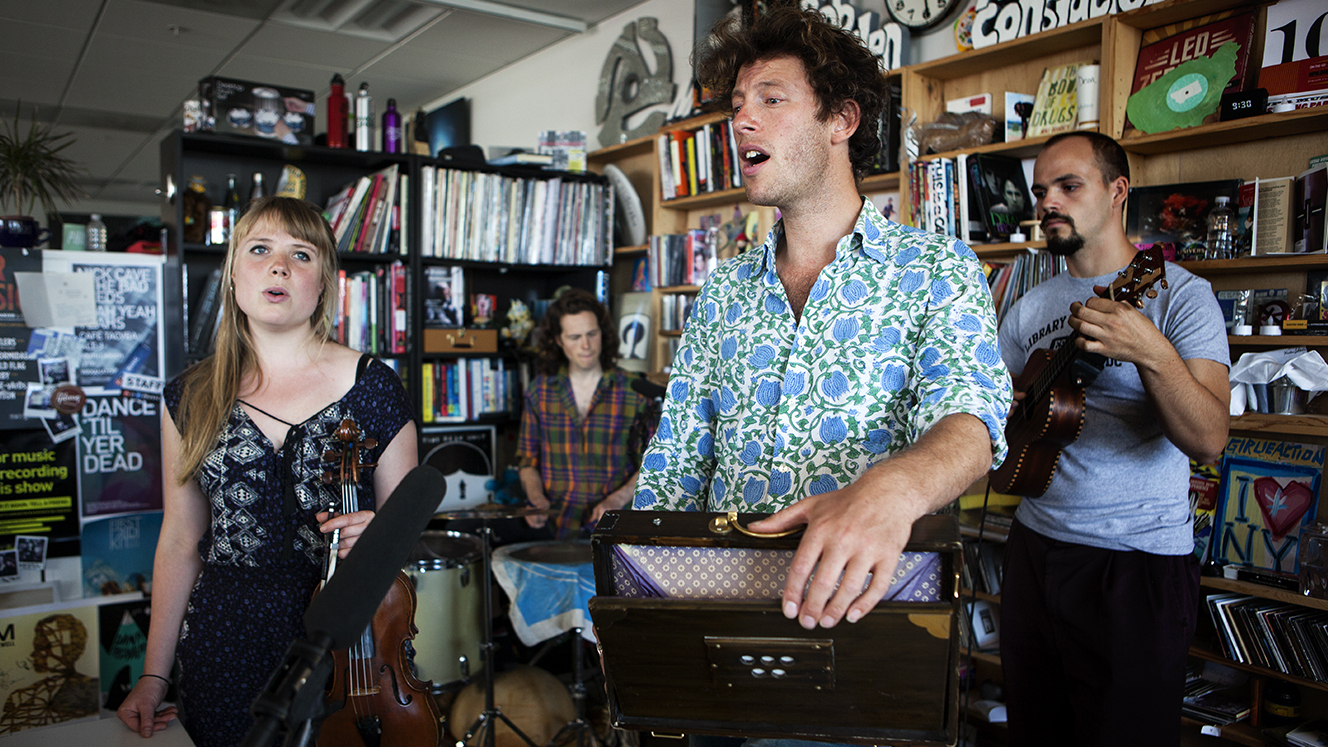 With a background as a wilderness survival expert and burlesque dancer, Sam Lee is hardly your stereotypical folkie. Not one born into the tradition, London-native Lee discovered traditional British folksong through old field recordings, which he listened to in his West End dressing room, between glittery-hotpant costume changes. But to learn second-hand was not enough – he had to get to the very heart of the tradition and hear it from those whose songs have been passed down through oral transmission. Against the advice of academics, who have dismissed rumours of living singers and material, Lee has spent years living among gypsy and traveller communities across the British Isles. These are some of the few communities still singing our indigenous folksongs – although in an age where we no longer have to make our own fun, family sing-arounds and generational transmission are lamentably waning. Mercury-Nominated Lee is something of a folksong activist, beginning to redefine the song-collector, champion his findings, and transform the sonorities and contexts of folk music for a new age.

On Thursday, Lee and his band played their first UK gig of the year, and they were visibly happy to be reunited on home ground – the past six months has been a whirlwind of international touring and Lee’s outdoor concert series “Singing with Nightingales” (which is pretty much exactly what it says on the tin, plus campfires and bluebells). Moving from the Sheldonian to the Wes Mem last minute may have meant a slight drop in crowd numbers, but I actually felt this venue was much more fitting for the evening – stained glass windows cast a rainbow glow over the stage, and the pull of the performance, rife with storytelling, was only heightened by this intimacy. Lee treated listeners to a tapestry of reinterpreted folk ballads, introducing each with a story of its origins (who knew there is folksong to be collected just off the A40 Witney roundabout?) and how he came to learn it. Incredibly relaxed on stage, Lee draws you in and makes you feel like you’re in a small living room gathering.

Through these ballads we were taken on a song-collecting journey of the British Isles: Gloucestershire (“The Hunting of the Hare”) to Aberdeenshire (“Morloch Maggie”), Oxfordshire (“O Yonders Hill”) to Hampshire (“The Bonny Bunch of Roses”) to name a few. Lee’s voice is mellifluous, with edge where needed, and most stirring in his decoration of line. But this isn’t your typical voice, fiddle, accordion fare – these ancient songs are dressed in new garb, from funk-led accompaniments, to bare piano and vocals, to pizzicato strings, to eastern-inspired drones and sonorities. Harmonies are nuanced and sometimes surprising. Textures build beyond what you’d expect and create drama. And with every song, Lee and Friends whip out more and more unusual instruments, from the twanging Jews Harp to the droning Shruti box and the resonant Mongolian dulcimer. Through Wexford and Kent I heard my stand-out favourites: “The Moss House” – depicting an old overgrown cottage – which Lee sees as a symbol of the ballad tradition, and perhaps, Lee’s most popular release, “Goodbye My Darling”, collected “from a horse dealer in Kent” – clearly also the band favourite. It would be a crime not to mention the slickness of the band, though “Friends” is admittedly a much nicer term for this exceptional collective. Flora Curzon, on fiddle, was entrancing and effortless, Jon Whitten seemed to play everything (a huge variety of keys and guitars), and Josh Green on percussion was ever inventive – key to the ever-changing textures of the songs. Whilst accompanying Lee’s meandering vocals, their onstage chemistry and cooperation is undeniable. The performance was also visually captivating throughout – Sam dancing dreamily, making his bandmembers grin, and at one point, the percussionist tapped the violin’s strings with chopsticks as she played, creating an otherworldly, polyrhythmic, jangly sound (if you’ve ever wondered what ‘fiddlesticks’ actually means, this is apparently it).

If you think you know what folk is, well, Lee is shaking up the scene. This is a man who sings with nightingales and knocks on caravan doors (and invites his audience to join him in a pre-election swimming protest in the Thames outside Parliament because “that’s the one place they can’t make us go away”). His startling originality, plus his almost-evangelical commitment to the cause, make him well worth a listen – check out his two albums, A Ground of Its Own, and The Fade in Time. But Lee, plus band, live, is next-level. Catch them next on the roof garden of the Southbank Centre on the 8th of July.

Bottling success – Catfish and the Bottlemen wow with ‘The Balcony’