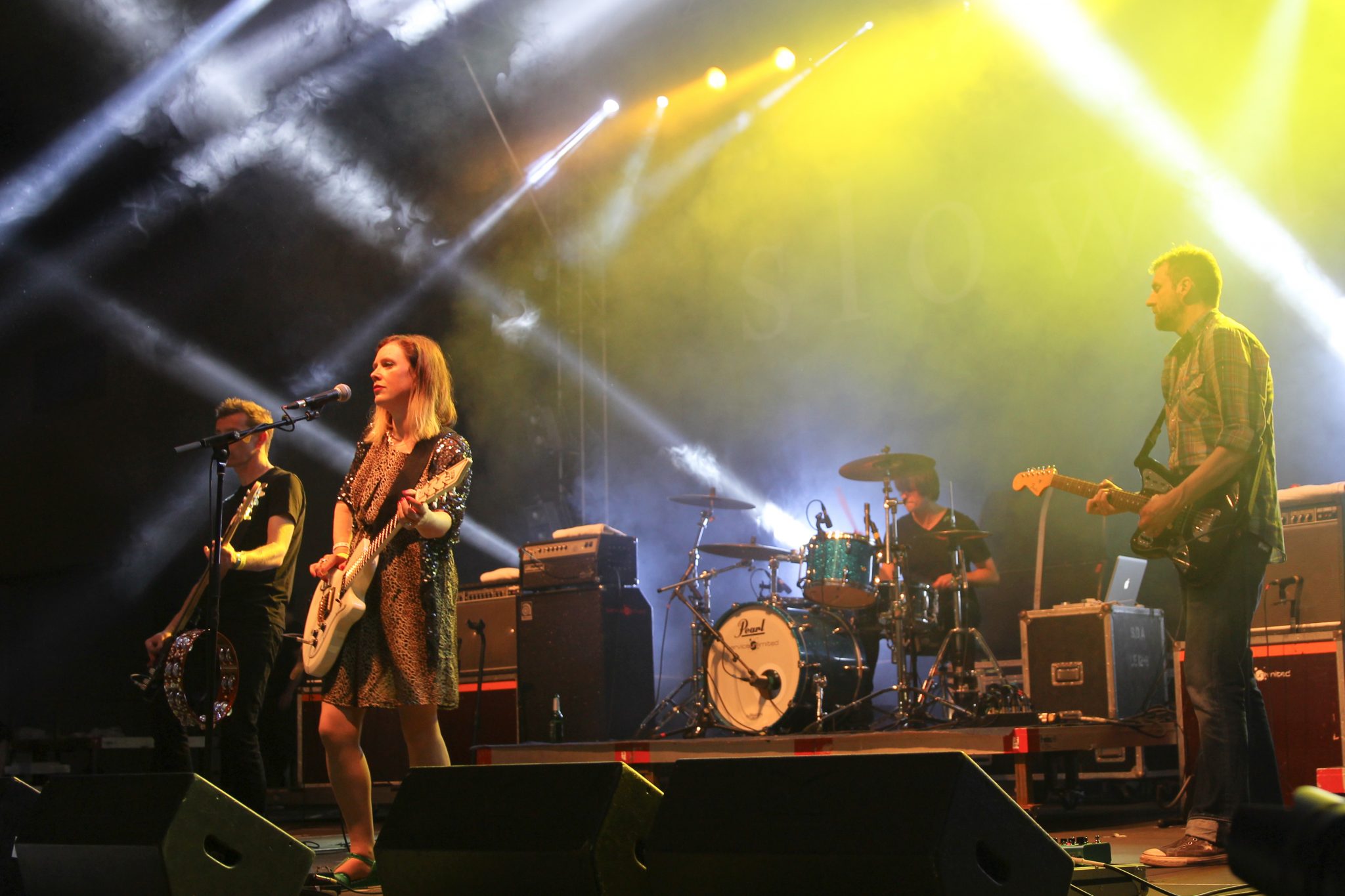 Live Review: Shoegazing into the Abyss – Slowdive and Ulrika Spacek at the O2

“Are you a music journalist?” I got asked, for the first time of my life last Friday at the O2, catching me ever so slightly off guard.
“Yeah. I’m actually supposed to be reviewing this gig.”
“Ah, that’s sweet! For who?”
Deep breath. “The OxStu.”
“Ah.” And she turned around and didn’t speak another word to me for the rest of the concert.

Luckily, the music itself turned out to be far less traumatic for me. Fresh from the release of their sophomore followup to last year’s excellent The Album Paranoia, Modern English Decoration, that very day, Ulrika Spacek have everything going for them. Their hypnotic brand of alt-rock, taking cues from the groovesome drive of Krautrock and the fuzzed out guitar interplay of Deerhunter, garnered them a larger than usual audience for an opening act, which turned out to be much deserved; when you boast songs like set closer “Beta Male” with riffs so primeval it’d be almost a challenge to alienate the crowd, whilst the ability of guitarists Rhys Williams and Joseph Stone to play the old loud-soft dynamic to pitch perfection mitigates any danger of their playing overshadowing their songwriting. So it was a bit of a pity that Ulrika Spacek’s set was quite so short: no Bruce Springsteen four hour long marathon this. Admitting that a four hour set is probably overkill for a band two albums into their career, would something that broke the fifty minute mark be too much of an ask? My reservations about the length notwithstanding, the set itself was a good appetite whetter, well worth turning up early for.

Onto the hotly anticipated main event. With Slowdive, the comparisons with their fellow 1990s shoegaze touchstones are almost impossible to avoid. Where My Bloody Valentine’s madcap guitar guru, Kevin Shields, prefers to envelop the listener in walls and walls of guitar noise, walls more Metal Machine Music than Phil Spector as far as walls of sound go, so as to obfuscate the fact that Loveless boasts some of the most transcendental melodies of the 90s, Slowdive’s noisy haze washes over you instead as waves on a beach, soothing through the meditative and repetitive nature of their ethereal, dreamy pop. The effect might be less immediate but no less trancelike: this was a gig where you could truly lose yourself in the music. And it is to Slowdive’s credit that with the release of their eponymous fourth album this year, the new material, received with almost universal acclaim, not only stands up to old favourites but fits in with it nigh on impeccably, for were songs like lead single Star Roving to suffer in comparison to Alison it would not be quite so disastrous as it would be for those songs to break the contemplative spell. That they do neither is nothing short of a triumph.

Alas, that spell was far from perfect, albeit for reasons altogether independent of Slowdive themselves. Shoegaze as a genre was never (and should never be) predicated on compromise: that the sound system was set up as quietly as it was, therefore, was something of a disappointment. The physical sensation of the waves lapping over the audience was absent, and the tactile internalisation of the wall of sound and its insistent yet ever changing rhythm equally so except perhaps at the most intense of moments, and this despite my being at the front next to the PA. It may seem like a minor point, but in fact this multi-sensory assault is part of what grants shoegaze its spine-tingle inducing properties, just as the ability to feel the bottom end pumping through the floor and through your bones gives techno its physical edge. Nonetheless, it was undeniably heartening to see a band like Slowdive, much maligned by the Britpop-loving press in their first iteration, receive a healthy measure of critical vindication with the rapturous reception the O2 crowd gave them, and that after so long their powers should be undiminished and perhaps even augmented. Only the most cynical of poptimists would deny their exposure to a new generation of fans to be a cause for unalloyed joy.