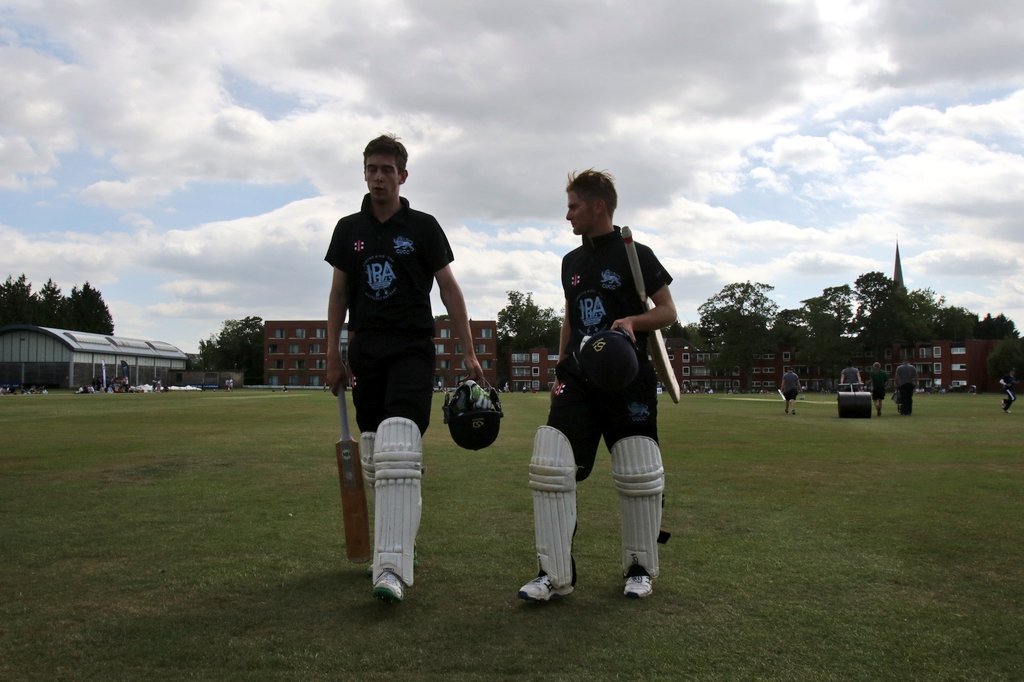 They turned up sporting a deep black jersey smacking more Black Caps than Cambridge University, but by the end of the Men’s Varsity Twenty20 fixture Fenners was undoubtedly painted the lighter shade of Oxbridge blue.

Cambridge had never lost a home Varsity match of the shortest format. Oxford, a mere year ago, had completed their first Varsity whitewash. Oxford travelled to the ground overnight from Manchester after a BUCS semi-final defeat, whilst Cambridge’s crown jewel Angus Dalgleish tore his hamstring in his side’s first loss of the season at Fenners. For good measure, thrown head first into the hum-drum of the occasion were 9 fresh-faced Varsity debutants.

On a scorching afternoon, it all boiled down to 20 runs needed off the final 2 overs. For traditional cricket’s intoxicating young cousin, this is utopia. Wildly unpredictable; tantalising for the neutral; and yet, a rare scenario that both bowling and batting captains would exude confidence in if sold to as some sort of facile shortcut to Varsity success beforehand. As Matty Hughes single-handedly ensured Fenners developed into a bowl of angst late in the day, there was a sense of inevitability that this would be the proposition.

Cambridge captain Patrick Tice won the toss and elected to bat first, but it was his counterpart Matty Hughes that pulled the first rabbit out of the hat, opting to play the extra bowler, and to open with the left-arm spin of Ben Swanson.

Cambridge openers Tom Colverd and Johnathan Das looked restless as Swanson conceded just a single, and it wasn’t until Johnny Marsden opened up at the other end that Colverd exploded into action, lofting nonchalantly and cutting powerfully to bring up his first two boundaries in fine style.

Then another lofted boundary into the leg-side, full of swagger, dancing down the pitch to Swanson. Then gone, caught at long-on, attempting a carbon copy. Colverd’s elegant aggression was plan A – de-lacquer the pink ball and get the side off to a flyer. But his dismissal did not trigger plan B, as the light blues slumped calamitously to 45-5 after 10 overs.

A series of batsmen provided cosmetic cameos, but none married their at times glorious stroke play to intelligence nor nous in the situation. Nipuna Senaratne took a Marsden over for 12, somewhat fortuitously edging through first slip for four before then compounding Oxford’s frustration with a beautiful one-knee cover-drive.

But even the wisest of heads fell victim to the reckless abandon that typified the first half of the innings. A zany first four overs yielded six boundaries, but just two singles.

The more proactive of the two captains, Hughes was intent on prohibiting continuity in the early part of the innings, and the 6 power play overs were bowled by 4 different members of the Oxford attack. As Swanson and Marsden gave way to the variations of Tom Brock and Toby Pettman, the boundaries dried up, and were replaced with a series of harebrained strokes that gave the impression the outfield was lava.

In the sixth over, Das sent one so high that it punctured the ozone layer before swirling and evading any fielder. The ensuing delivery made singles look like they were being communicated by Morse code, as Senaratne found himself stranded half-way down the track. Das and Dalgleish then holed out in consecutive deliveries, ending torturous stays, and Chris Webster looked as good as you can be for 10 off 5 deliveries before too slapping straight to deep extra cover off Pettman.

As Cambridge looked to reset, and Oxford looked to restrict, four overs of Jamie Gnodde and the returning Swanson played out as though a temporary armistice had been formed between the two factions. Tim Moses was content to unassumingly amass runs with dexterous blows, whilst the two frugal spinners held tight yet defensive lines, emboldened by the dismissal of James Poulson lbw.

Moses flicked a switch, and the light blue juggernaut whirred into four overs of brutish attack. First, Brock was launched back over his head by Moses, shattering pavilion glass, and then the following ball was treated with further disdain; crunched through extra cover for four. Then Marsden. Extra pace. Same result. Ball 1, through cover for four. Ball 2, stand and deliver leg-side hook out of the ground for six. Ball 3, Marsden round the wicket now, puncturing on-drive for four. Ball 4, yorker, gone.

In the space of 8 deliveries, Moses had added 25 ruinous runs, seen his stumps dismantled, and become the seventh man out. But the legacy lived on as erstwhile passenger Rory Sale and captain Patrick Tice plundered a further 25 vital runs from the final two overs. 50 runs were taken from the final four overs, and Cambridge had somehow limped/blitzed [delete as appropriate] their way to a very defendable total.

As Moses stood atop of his mark, Tice stood a further distance behind the stumps, gesticulating wildly to the field for the grand unveiling of his side’s newfangled artillery. The 9ft7 fast bowler was unleashed with a snorting short ball that pitched and towered past Dan Escott’s shoulder, still rising. The second ball was the same again, and as Escott rocked back to pull from his eye line, he hurriedly feathered through to Tice. Oxford’s in-form man was gone, and the home crowd gushed.

The dismissal brought Jamie Gnodde to the crease, and the left-handed aggressor allayed immediate fears with two sumptuous fours off Moses; the first a powerful cover-drive that stamped an irrevocable authority; the second a back-foot punch squirted away square.

But Crichard was thundering in from the other end, extracting movement with heavy balls delivered from his wide-shouldered trebuchet-style action. Gnodde was adjudged to have gloved one down the leg-side, Alex Rackow was dropped first-ball, then got a beauty that cut him in half and claimed his inside edge, and Matthew Naylor nicked through the vacant first slip region. It looked as though Crichard would defend Cambridge’s 132 alone. Oxford were twenty-four for three.

But in the most topsy-turvy of Twenty20s, the recalcitrant Matty Hughes endured Crichard, punished Moses, and then showed a brazen disrespect to the slow left-arms of Nick Winder and Rory Sale.

Naylor was slow to get going and sought to hit gaps in the field but provided Hughes with a first telling partnership. The innings was built around Hughes, yet a paucity of integrity meant that he had faced just twenty deliveries at the end of the tenth over. From then on, he carved, swept, reverse swept, launched to cow corner for six in consecutive overs, and scampered five twos. Of those, two were certain fours but for Chris Webster hurtling around the outfield head-first on a figmental skeleton bobsled – remarkably retaining the proficiency to run Naylor out too.

In the 15th over, Hughes smote down the ground. Winder was able to dive and parry, and as he relayed to Tice behind the stumps, Hughes hurled himself back at his crease. His reward for remaining to further thwart the Cambridge cakewalk was an angled, jagged Moses bouncer that rattled the side of the grille. Bouncer-drunk, dirt-cladden, still Hughes stood indomitable.

Then the home straight. A 9-ball over of wide yorkers from Poulson, some too wide, and the nineteenth over arrived. A single, a leg-bye, a wicket, a wide. Moses held his nerve. Then the twentieth. With twelve runs needed off the final two balls, Hughes set himself and connected. He turned instantly and placed his bat firmly under his shoulder, unable to watch as Poulson steadied himself beneath. It was the moment Oxford had feared. The moment Cambridge had dreamed.

In the build-up to the fixture Patrick Tice had spoken of his “new team playing a new brand of cricket.” If this was fearless cricket’s introduction to the Varsity fixtures then it is still at a beta phase, but Cambridge were unrecognisable from their recent afflictions in more than just the colour of their kit. At Lords, they carry momentum as they seek a first victory for five years.