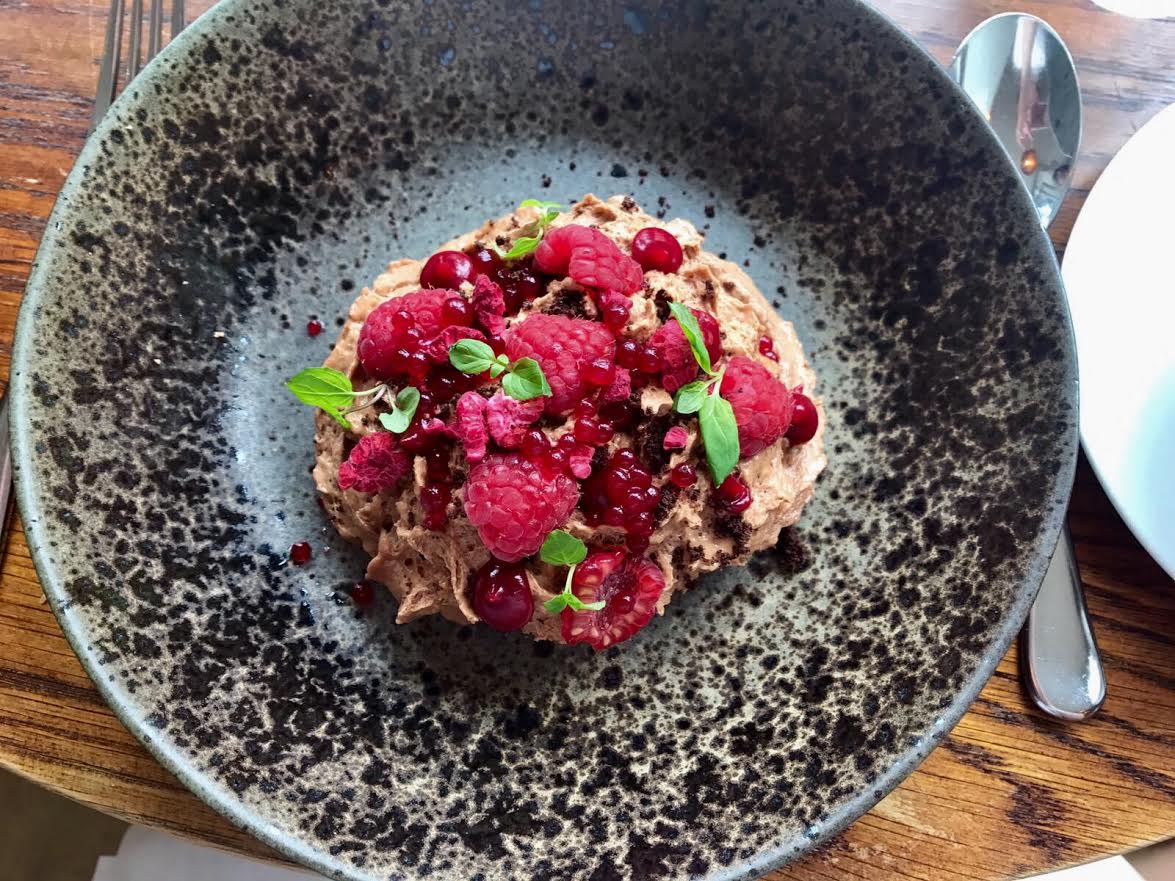 The Oxford Kitchen is tucked away in Summertown, North Oxford, and maybe a ten minute cycle ride from the city centre. Me and my second set of taste buds, Davina Forth, visited last Tuesday at lunchtime to test their wares.

In terms of location, the Oxford Kitchen isn’t great: it is placed on a busy road, just outside Ewert house where I had my prelims, which meant my meal was imbued with the sweet, sweet taste of first year exam panic. Luckily, once inside the interior was elegant and sophisticated, with exposed brick walls and a dark, grey colour scheme. I also really liked the art: they had some Andy Warhol Campbell’s Soup prints, which gave the room a contemporary feel and an easy, relaxed coolness. At lunchtime it was not very busy, but that did allow us to get a window seat, where we were served bread by a very friendly waiter.

Bread, as a rule, is never spectacular; it’s just bread. Which was why I was shocked at how particularly yummy this loaf was. I can’t put my finger on whether it was the crunchy crust, the asymmetrical ovals it was sliced into, the oddly spherical scoop of butter they served it with which came garnished with sugar and salt, or maybe even my rumbling stomach, but this bread was delicious and set a precedent for the meal that was to come.

To start, I chose the roasted scallops, with black pudding, cauliflower and onion bhaji, while Davina had the buffalo burrata, black truffle, jerusalem artichoke, apple and lemon puree. What initially struck us about both dishes was the presentation: not dissimilar to a small sculpture, and both ridiculously picturesque. My scallops were meaty and beautifully seared, and contrasted with the sweetness of the bhaji and earthiness of the black pudding. I am informed Davina’s burrata equally combined disparate flavours to make a delicious starter.

What initially struck us about both dishes was the presentation: not dissimilar to a small sculpture, and both ridiculously picturesque

For the main course I had ray wing with langoustine and gnocchi. The wing itself had a crispy finish, but was soft on the inside, with a texture that fell apart in the mouth. The langoustines were sweet and juicy, and went well with the shallot and creamy, lemony sauce. The gnocchi were homemade, and unlike the pasta-esque dumplings I am used to: instead retaining the texture of a classic potato, and stacked at intervals around the dish. Davina’s beef fillet was similarly mouth watering – oak smoked and served with Jacob’s Ladder, red wine braised onions, and watercress. The beef was perfectly cooked and tender, and the flavours blended well.

To finish, I selected the Camellia chocolate cream with yoghurt and mint sorbet and assorted berries. The pudding arrived as a mound of chocolate, garnished with fruit and hiding a jarringly minty yoghurt centre which undercut the rich mousse of the outer shell. Davina’s pudding was an absolute masterpiece, strawberry cream which was “surprisingly yummy”, featuring a hard outer shell and a soft inner gooey-ness, and garnished with fruit and honeycomb.

My only regret is not having enough time or stomach space to explore the rest of the mouth-watering menu, as I truly believe every dish on the menu would be intricate, excellently crafted and delicious.

It would be impossible to write about this meal without mentioning the anxiety both Davina and I felt with regards to how it could actually be free (for us reviewers). There is no mistaking that the Oxford Kitchen is not a cheap place to eat: at £35 for 2 courses or 3 for £40 for the a la carte menu, the food probably occupies the higher end of a student budget. However, it is also exquisite, and the lunch menu is only £25 for three courses. My only regret is not having enough time or stomach space to explore the rest of the mouth-watering menu, as I truly believe every dish on the menu would be intricate, excellently crafted and delicious. In all, I would highly recommend convincing your parents to treat you next time they’re up.