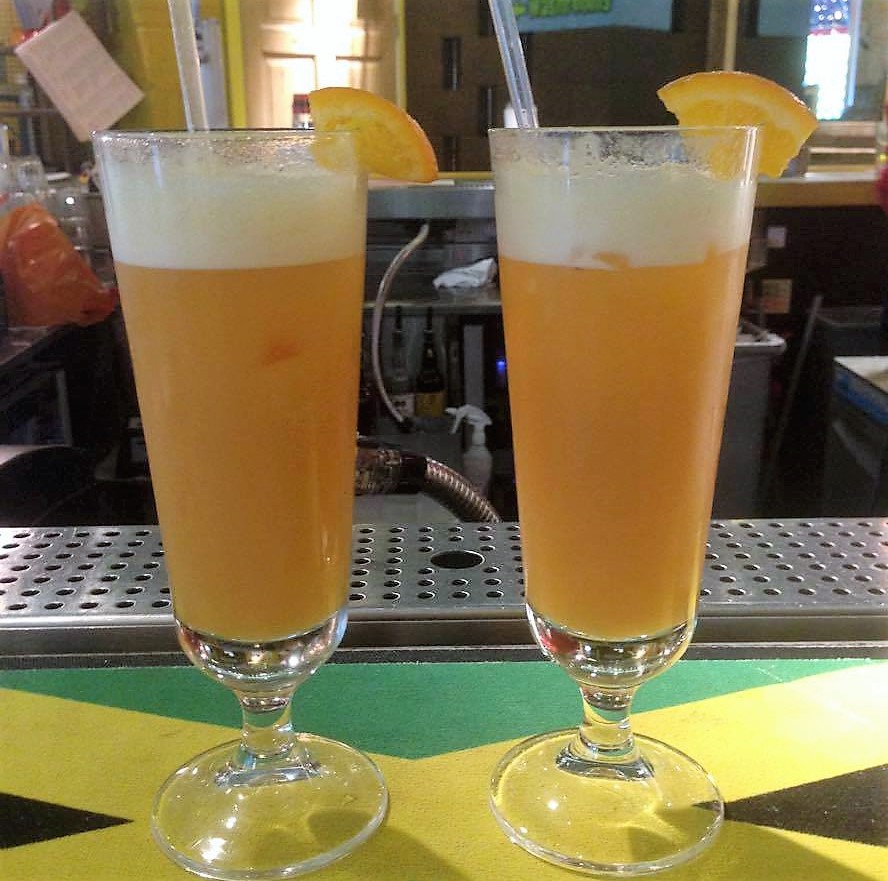 It was the kind of beautiful sunny evening that merited sunglasses and bare legs when I made my way to Turtle Bay, the Caribbean restaurant and bar tucked down Friars Entry (behind the big Tesco on Magdalen Street). My friend El, one of the illustrators for the OxStu, met me outside and we allowed ourselves to be drawn in by the enticing wafts of spices and Jerk barbeque, for which Turtle Bay is best known. There wasn’t even a trace of that sense of guilt that often accompanies going inside when it’s nice weather, because we were immediately immersed in the restaurant’s wonderfully relaxed, cool (also literally, which made a pleasant alternative to the sticky library I had spent the afternoon in) and casual vibe, fostered by the vibrant yellow and blue colour scheme and the reggae music. We were greeted by cheerful and warm waiting staff and were ushered to seats at the bar, where we were just in time for the 2-for-1 Happy Hour cocktails (normally costing £7.15 each, but if you go during Happy Hour then it’s buy one get one free). After a lot of deliberation over the menu (because how are you supposed to choose when every drink sounds like summer in a glass?), we both went for the Goombay Smash, an appealing-sounding combination of Cockspur rum, Koko Kanu coconut rum, apricot liqueur and bitters, shaken with orange and pineapple. It exceeded even our pretty high expectations – fresh, velvety, fruity, zesty – and for a moment I truly felt (and I know it’s very clichéd) like I had escaped the pressing deadlines and stress of Oxford. We enjoyed the cocktails with an accompaniment of jam rock spiced popcorn (£1.50) (mainly chosen because of the intriguing name): sadly not very crispy, but far made up for by the deliciously more-ish coating of pepper salt and lime.

The Goombay Smash was an appealing-sounding combination of Cockspur rum, Koko Kanu coconut rum, apricot liqueur and bitters, shaken with orange and pineapple

After a while, we were shown to a table and perused the menu again to find something to eat. I went for the curry goat (£9.95). I’m not really sure what came over me – I am one of the least adventurous people ever and am perfectly content on my diet of pasta and tomato sauce – but whatever it was should be bottled and dispensed at regular intervals because boy, I’m so glad I went for it. The goat meat was, aside from a few chewy bits, tender, juicy and flavour-packed. The heat of the meat was balanced out by the rice and festival dumplings served alongside. El went for the babyback pork ribs (£10.25), cooked in the jerk pit barbeque, which, visually, was not the most appealing dish, but the meat was tender and fell off the bones. It had a gentle flavour, although El preferred things a bit spicier and doused hers in a substantial quantity of the Jamaican BBQ sauce provided. The sweet potato fries it came with were heavenly, and I am not normally a big fan of sweet potato, but these balanced a crispy exterior with a fluffy interior beautifully.

Despite feeling fairly full by this point, we could not resist a pudding. El and I decided to share the spiced rum and chocolate pot (which turned out to be less of a pot and more of a dish), served with coconut ice-cream (£4.95). It can be summed up in one word: glorious. The coconut ice-cream was fresh and a perfect palate cleanser, and married well with the flavours of the chocolate and not overpowering, but still noticeable, hits of rum. To finish the meal, we tried a shot of the Old Jamaican Spiced rum (£4), which was sweet, with a hint of vanilla and nutmeg, and one hundred times better than what you can get in Tesco. We both agreed that we needed to return to Turtle Bay very soon to sample the other rums on offer (and the range is huge – say hello to the likes of ‘Butterfly Cane’, ‘Gold of Mauritius’ and ‘Appleton Signature Blend’, for example).

The coconut ice-cream was fresh and a perfect palate cleanser, and married well with the flavours of the chocolate and not overpowering, but still noticeable, hits of rum.

The experience at Turtle Bay is one which I would strongly recommend – even if it’s a little on the pricey side – whether you just want to enjoy the cocktails, sample the rum, or enjoy a meal (they do a very tasty-sounding lunch menu as well, and have options for vegans and vegetarians). From the moment we stepped in – the attentive staff, impressively quick service, tasty and wholesome food, the freshness of the ingredients, the chilled décor and music – to the moment we had to drag ourselves away, we were immersed in a happy bubble of goodness.