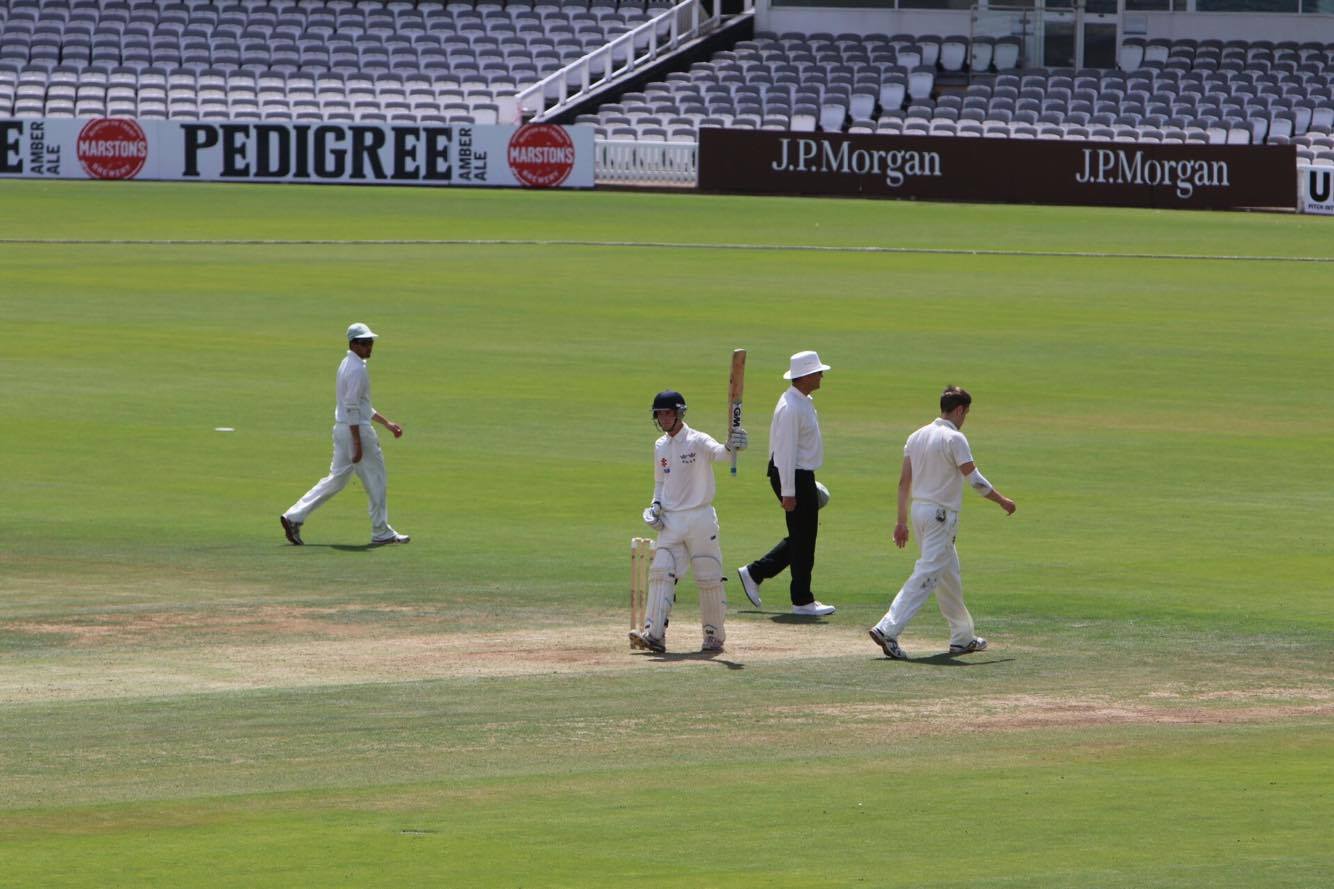 Five in a row at Lord’s for the Blues

Perhaps, when Matty Hughes strolled out for the toss at Lord’s, he did not envisage that batting first he would be run-out via a deflected straight drive from his partner’s bat. And perhaps, he did not envisage that after losing a bowler to a dislocated shoulder just seven overs into the defence (the pace battery depleted twice inside two days), he would then be martialling the Dark Blues with ball in hand. Then again, Cambridge have never been the most orthodox of opponents.

But Oxford have racked up five in a row at the Home of Cricket, and this was an impressive performance that levels this years Varsity series at 1-1. An injury-ravaged Oxford battalion powered by Jamie Gnodde’s incisive violence, it was Cambridge skipper Patrick Tice that fell limp at the conclusion, stumps smote with his side nine runs adrift.

Rhuari Crichard started proceedings with his smooth and rhythmical action, met with the control and balance of Dan Escott’s flashing blade. With the Lord’s clock barely whirring into movement, Crichard’s T20 figures had been eclipsed emphatically, and Oxford had a flyer.

If there was a defining moment to the innings, it was the re-introduction of Tim Moses – the patented light Blue formula to breaking a partnership – in the thirtieth over. Each of Moses’ next twelve offerings were greeted by Gnodde – Oxford’s putative destroyer – notching twenty-one runs with a melange of grizzled aggression through point and third man. If the lusty blows were most the emphatic of the inning, then it was refreshing that the knockout blow (Moses was removed thereafter) should be the most traditional of strokes, as Gnodde leant on a full delivery and unfurled a drive through a cluttered off-side field for four.

The Pembrokian left-hander had arrived at the crease after the probing James Poulson had run out Hughes with his golden hand, and Escott had chopped on looking for one glorious cut too many. The short grandstand boundary encouraged Patrick Tice to deviate from bowling his slow left-armers in tandem, as he had done in the T20, but he was continually beset by the counterpoint of Gnodde against the right-handed Oxford middle order, shuffling plans D to F into action desperately.

Gnodde and Matthew Naylor, who crafted an assured fifty at a vital time, put on 72 for the third wicket, and launched Oxford to 191-3 after 40 overs – just a run shy of their total in last year’s rain-reduced game. Gnodde celebrated by putting Rory Sale into the Sir Denis Compton Stand, and by the time he holed out charging a Moses short-ball (such was the arrogance of the innings), he had accrued the highest individual Dark Blue total since 2008. 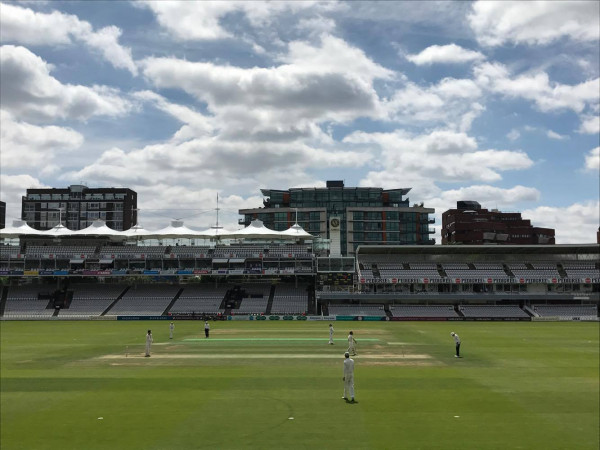 Moses, like the best strike-bowlers, sensed blood and decimated the middle-order, removing Alex Rackow, Jack Harrison and Tom Brock in quick succession; exacting a revenge of sorts after Gnodde had made his go-to bouncer look ramshackle. But a hat-trick ball went for five wides, and there was still time for further cameos, Nick Taylor wrestling a telling 32 without looking overly fluent, and Jonny Marsden lofting Angus Dalgleish audaciously into the second tier to push the total to 264-8.

With the bat in hand, Moses looked to serve up a repeat dose of his Fenners cocktail, composed strictly of long-levered pickups and wristy cuts. Three sixes and a one-bounce four rained down on cow corner in the space of four pavilion end overs; the once-astronomical required run rate descending attractively all the while. Playing with the left-arm spin of Ben Swanson, and relishing the extra bounce of Toby Pettman, Moses looked in supreme touch before being exposed to his kryptonite-ball; a toe-crushing yorker from Jonny Marsden.

Marsden was just three balls into his second spell after a destructive bout with the new ball that removed both openers, Tom Colverd and Darshan Chohan. Chohan looked particularly imperious, and played like a man avenging his omission from the T20 showpiece, right from an ugly air shot first up to a brutal attack of Pettman’s fourth over. Runs were not the only casualty of the affair, as Tom Brock dislocated his shoulder saving four at third man, forcing captain Hughes into bowling ten tight middle overs.

Colverd provided a strong selection claim for a “two types of leave” montage after misjudging a Marsden jaffa that provided a stern test for the tethered bails being trialled, and bowling back-of-a-length across the left-hander, Chohan could only feather behind in a rare defensive stroke.

Angus Dalgleish was charged with steadying the light blue ship after Swanson had claimed two wickets in his first 15 deliveries, and the left-hander was supreme behind square in an innings punctuated with six boundaries (of a total seven) through the region. 62 with Nipuna Senaratne, and a blitzed 66 with Moses hauled Cambridge back into contention, but their fleeting challenge had peaked when Swanson responded boldly to Moses’ ravenous liking of his bowling.

First, he flung himself halfway down the track sharply to remove Dalgleish caught&bowled, the ball after Patrick Tice was dropped at leg gully sweeping, and then the dangerous Rory Sale was gone. Bowling to the short cover boundary, Swanson dared to give the ball extra flight, and Sale arced it to deep mid-off where Pettman clung on willingly. It was the first time that the game’s destiny felt secure.

Tice and Poulson remained to crunch the numbers, however, and when Marsden pumped in for his final six offerings, thirteen were required. Jack Harrison ran out Poulson attempting a bye, and when Marsden, as he so often has done, castled Tice’s stumps around his legs, ten Cambridge wickets had fallen.

At Fenners on Tuesday the Authentics defeated the Crusaders in a thriller, and on the Nursery ground, Oxford Women produced a belligerent performance to chase 229 with seven wickets in hand. The results represent a complete reversal of the Twenty20 fixtures, and leave the overall score tied at 3-3 ahead of the transition to red ball cricket, where the resurgent Blues search a first victory at Fenners for four years.