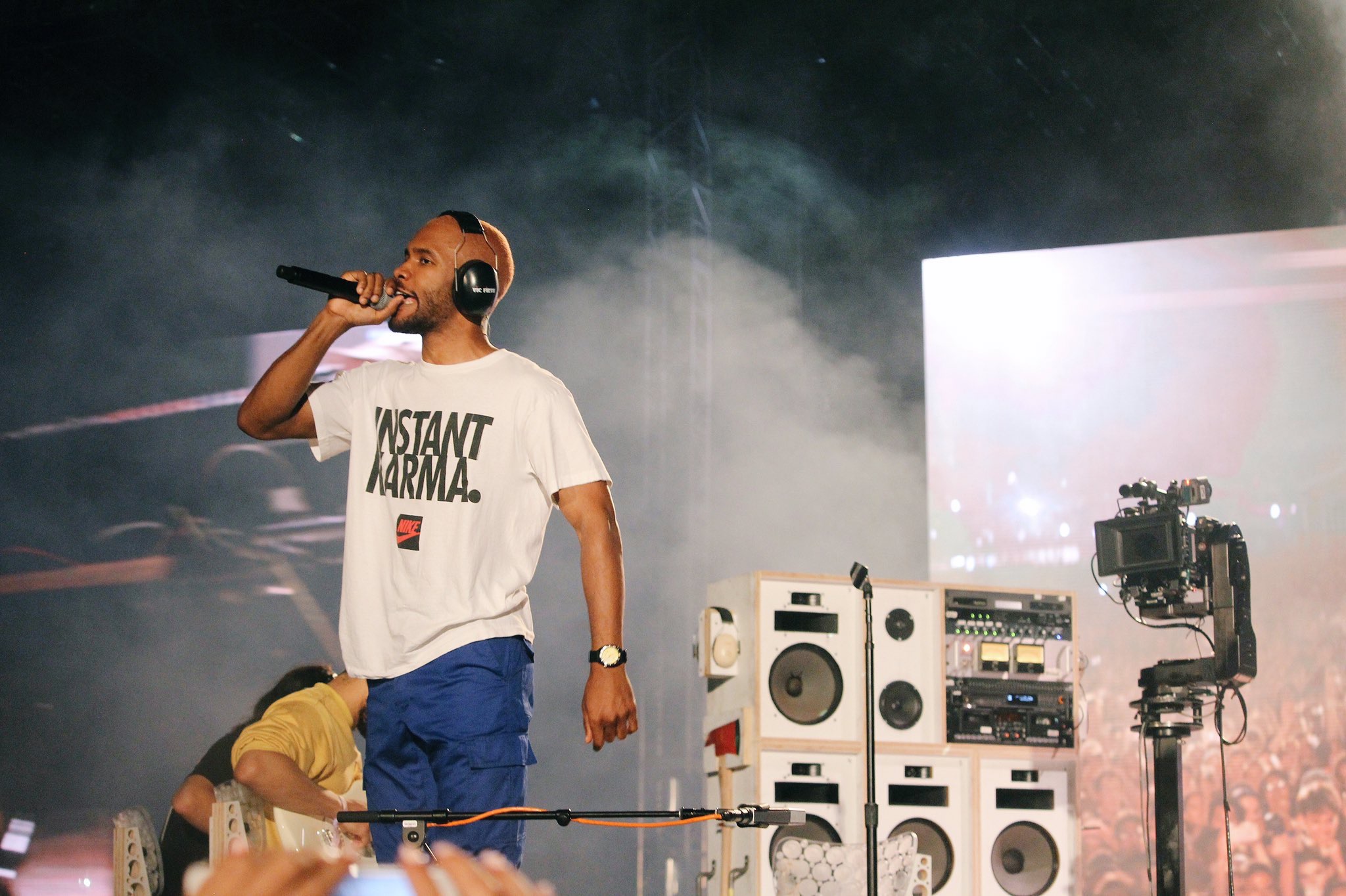 On the day I saw Frank Ocean at Lovebox Festival in London, the news came through that a California judge had allowed a lawsuit filed by his father, Calvin Cooksey, against him, to continue its progress through the courts. The judge called the defences Ocean had offered against his father’s claims “devoid of any factual support.” If the news had made any impact on Ocean he didn’t show it, but even if he had, it perhaps would’ve been difficult to discern in the performance of one of music’s most introspective figures.

Ocean’s history and discography paint the portrait of a man who thinks long and hard about his own life, who cautiously opens up his heart with reference-laden and opaque lyrics, and subjects himself to constant and rigorous self-analysis. For the majority of musicians with a stature like his – his most recent album, Blonde, has appearances from, among others, André 3000 (of Outkast fame) and Beyoncé, who literally just sings ‘ah’s in the background of “Pink + White” – such openness can be side-lined in favour of singalong-ready hits, or at least relegated to the moodier album tracks. But even the poppiest of Frank’s work doesn’t, at first glance, seem especially festival-ready – “I’ll be the boyfriend in your wet dream tonight” is an improbable crowd-pleaser; only half the tracks on Blonde have drum beats at all.

Indeed, compared to his equivalent on the night after – London drum and bass outfit Chase & Status – he almost seems better suited to the acoustic tent than the main stage. Perhaps naturally, a lot of audience members who had heard the name but weren’t sure what to expect seemed disappointed to the point of rudeness during the set (a guy next to me in a green suit spent most of it grinding on the person in front of him, despite the fact he was with his girlfriend and clearly wasn’t enjoying the experience). But for those invested in his airy, delicate and thoughtful music, it was spellbinding performance.

His tour so far has been plagued with technical issues and delays, forcing the cancellation of three festival slots and a 40-minute late start to his set at Parklife in Manchester. It’s clear why – after a 25-minute delay, his face appeared looming over the crowd from live cameras on stage under the direction of Spike Jonze (director of Being John Malkovich and Her, as well as music videos by Fatboy Slim and Kanye West). Bathed in yellow haze from half a dozen immense industrial lights arranged around the arena, Ocean cut a solitary figure on his purpose-built stage. More installation than blank canvas, his platform jutted out into the audience to give us panoramic views of his isolated body between the metallic chairs and set of lockers adorning the stage.

Jonze’s cinematography – flitting between different handheld cameras as they tracked around the performance – almost separated you from what was happening on stage. Ocean has always been careful to provide a very curated view of himself – this is a man whose primary form of communication with his fans is through essays on his tumblr, has virtually no social media presence, and premiered his single “Chanel” by looping variations of it for an hour on his Apple Music radio show – and this self-construction is reproduced on stage. The professionalism of the videos draws you in and away from what’s happening on stage; Ocean provides the audience with a frame to view him through even when he’s right there in front of you. It’s not artificial, but there’s an extra degree of separation between you and him; he’s live, but he’s not quite within touching distance.

The sparseness of the music and instrumentation forms a part of this image and this atmosphere. Anyone opening their set with a song called “Solo” is sure to attract the sort of faux-philosophical comments that you’ve been reading for the last 600 words, but it’s a reflection of the overarching themes Ocean deals with in his music. He knelt at the precipice of the stage as he played a solo keyboard arrangement of “Good Guy”, and a small ensemble joined him for the middle third of his set, seated in a circle facing inwards around the platform, providing subtle live arrangements. But for the majority of the performance it was just Ocean on his own, framed against the night and alone but for his microphone.

His set was, other than channel ORANGE stand-out “Thinkin Bout You”, comprised of songs from Endless and Blonde, as well as his post-album singles. You can tell how much more confident his voice has become with his latest album, as it soars and dives with pin-point accuracy and an emotional power to match Sam Cooke. Most people don’t go to a festival expecting to tear up during the headline slot, but it was hard not to when the chorus of “Ivy” cuts through you: “I thought that I was dreaming/when you said you loved me…”

It remains to be seen whether or not Frank Ocean’s dad succeeds with his lawsuit. Ocean claimed in a Tumblr post that his father had dragged him out of a restaurant as a young boy after he discovered the waitress was trans, a charge that his father denies. Ocean’s sexuality has been a central part of his public identity – his coming out in 2012 was hailed by the hip hop industry, and hardly any of his songs use gendered pronouns – but even if he is unable to prove his story’s veracity it remains a foundational pillar of the Frank Ocean myth.

The protective screen he throws up, whether in recording, on stage, or in public, can make him seem distant and isolated. The court case provides an ugly and unplanned look under his normally airtight skin, but fortunately we don’t have to only rely on these forced entries to see the mask slip. Halfway through the first verse of “Thinkin Bout You”, he fell out of time with the backing track and restarted the entire song, laughing to himself about the enormous headphones he wore for the entire set. To 30,000 people in a park in east London, faithfully singing along to every line, it’s a glimpse of a different Frank Ocean from the serious one dominating the stage’s screens, yet has always been there.