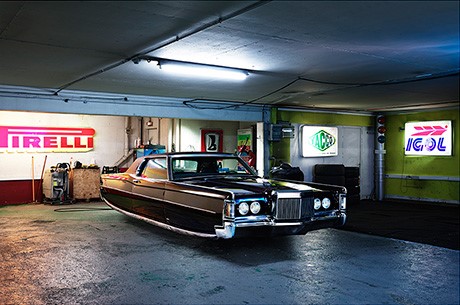 The Drive to ‘Air Drive’

Buildings, cars, more buildings and more cars, all fly past as I speed through downtown, in the scorching desert heat, on my way to MAD Gallery, Dubai. Never has the phrase ‘concrete jungle’ seemed more apt, than amidst this frenzy of all things glitzy and glamorous about extreme urbanization. Never have the glass monsters that every Dubai postcard flaunts shone with such ferocity in the midday sun of the hottest day of the year. And, never has an art exhibition more epitomising of the ideals and culture, of speed and innovation, of this metropolitan ever come to town, than Air Drive at MAD Gallery, a photography showcase of Renaud Marion’s visionary and rather ironic flying versions of classic vintage cars, including Chevrolets and Aston Martins.

Does this exhibition go beyond just portraying Marion’s dream, and in fact throw light on the reality of today’s progress – a messy race for technological and knowledge superiority, amidst the poor implementation of previous ideas and the ignorance of basic amenities?

The images, inspired from his background in graffiti and later street art photography, are a unique mix of retro concepts, depicted in contingence with ‘futuristic imaginings’. When questioned at the opening event of this showcase Marion talked through the four-year compilation of these images, from initially shooting the automobile images to using digital assembly techniques to give the image of flying cars. Rather interestingly, each image of a levitating retro car is set in a background of scruffy-looking urban sights, such as stained parking-lot walls and abandoned construction sites. This begs the question, does this exhibition go beyond just portraying Marion’s dream, and in fact throw light on the reality of today’s progress – a messy race for technological and knowledge superiority, amidst the poor implementation of previous ideas and the ignorance of basic amenities? On being asked this, as I could no longer refrain myself from raising this point, Marion simply replied, “You said it, Ma’am, not me”. He couldn’t have been more confusing – did he mean that for him, an artist, they were simply aesthetically-pleasing images and me, an aspiring student hoping to work in economic development, they represent something more profound? Did he mean that I had caught on to the essence of his message, and that his sole aim was to provoke various perspectives on his work? I suppose I’ll never know for sure, but after all, isn’t that the fun of it all?