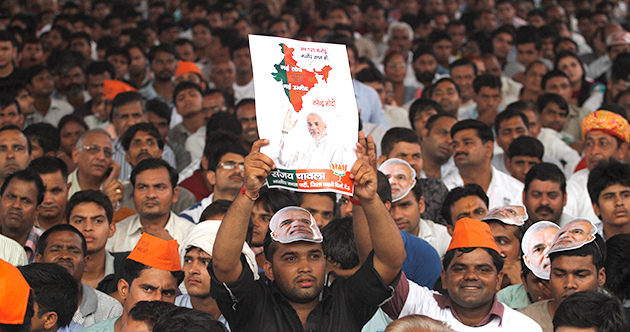 Back in 2015, I subscribed to Dawn, Pakistan͛s biggest English language news magazine. It was an impulsive decision, prompted by a fascination with the lives of my ex-countrymen across the border – if one separated twin brothers at birth, brought one up as a Muslim and the other as a Hindu and set them loose in the world, how similar would their decisions be? Over time I became well-acquainted with the most common charges levelled against India as a country – Muslims are persecuted, the Hindus control the government, and the people of Kashmir are being systematically oppressed by the Armed Forces Special Powers Act. At the time, it was easy to feel a sense of incredulity on reading this – after all, we were the liberal democracy, while Pakistan was still reeling from the after effects of a spate of military dictatorships. But that was in 2015, and much has changed since then.

In 2014 Narendra Modi was elected in one of the largest electoral victories in Indian political history. While there were qualms about his purported role in the 2002 anti-Muslim riots in Gujarat – often described as a pogrom– and the fact that his BJP party was a darling of the Hindu upper classes, he was elected on a pro-development and economic liberalisation wave. After a year, stories of violence against Muslims and Dalits – so called untouchables– gradually began to bubble to the surface. Not much time later the central government introduced a ban on the slaughter of cows, the religious motives of it quite clear by the fact that they had not decided to ban the slaughter of any other animal. Media organisations began to report killings perpetrated by bands of gau rakshaks–quite literally rescuers of cows. One would be tempted to laugh if it were not for the images of slaughtered Muslims that accompany these stories, or rather, images of hunks of meat that might once have been Muslims, with families who loved them. Not surprisingly, many of the victims were later proven to have not slaughtered any cows at all. But bands of murderers drawn together by hate rarely have time for due process.

Media organisations began to report killings perpetrated by bands of gau rakshaks–quite literally rescuers of cows. One would be tempted to laugh if it were not for the images of slaughtered Muslims that accompany these stories.

After an attack by Pakistani militants on the Pathankot military outpost last year, the ͚saffron brigade seized the initiative with relish. They somehow managed to turn a terrorist attack into an excuse to expel Pakistani actors in Bollywood from the country. The logic of the decision might be questioned – but then one remembers that these are the same people who treat the phrase ‘Our soldiers on the border are dying from Pakistani bullets’ as a magical argument that excuses any government action. Some months earlier, the government had invoked sedition laws from the time of the British Raj to arrest students of Jawaharlal Nehru University for crying ‘Death to India’ in response to the Armys actions in Kashmir. And just last week, the country was shaken by the news that senior journalist Gauri Lankesh, who had a few days earlier tweeted that she had compromising information regarding a certain ruling party politician, was found murdered in her home in Hyderabad.

It is difficult to believe that all this happened in the space of less than two years. For a nation that prides itself on being the largest democracy in the world, it seems to have let its democratic machinery fall into serious disrepair. While freedom of expression is a controversial topic even in the West, it is almost universally accepted that whatever ones preferred conception of the doctrine, at least political speech needs to be covered. If it isn’t, one could seriously ask what the point of such a doctrine is. In India, in the space of two years university students have been arrested for killing the country via metaphor, Dalits are being told to commit mass suicide, Muslims are being murdered for voicing their concerns, and journalists are being either killed before they get a chance to run their exposes, or are being threatened with bans on content (as happened with NDTV last year for their coverage of the Pathankot attacks). There was even a ban on pornography for a day. How many isolated incidents of this kind does it take before one can safely say that freedom of expression is dead?

Most insidious of all though is how the ruling party has managed to turn the tyranny of the majority, as JS Mill famously put it, into a science. The avalanche of Hindutva trolls that a person can expect to meet on social media has resulted in a chilling effect more complete than anything outright government restriction could hope to bring about. Whereas in Ukraine, Egypt and Tunisia, social media was an escape into an unrestricted world of free opinion, in India social media is very quickly turning into a well of angry voices where no one can hope to either impart a good idea or receive one. This, along with the fact that anti-government media is being curbed, means that we are fast approaching a state where the only major source of news is the government and pro-government news outlets. If freedom of expression is supposed to assist self-government͛ as so many theories posit, it is hard to see how a populus with only one major source of news can be said to be governing itself. This is evident in the treatment by the public of the demonetisation debacle of 2016, where the government abruptly banned 86% of the currency notes in circulation in a bid to root out black money and income tax evasion. Despite economists both at home and abroad– Amartya Sen and Paul Krugman most prominent among them – deriding the move and its execution, as well as data establishing that it would cost the country about 1.28 trillion rupees, the vast majority of the public still celebrate it as a daring move. Most astounding of all is that the move has hit lower income families that depend on daily wage labour the hardest, and yet Modi’s approval ratings among these people have soared since the move. There is no other explanation for this phenomenon than the fact that they receive only one-sided information – probably from local BJP party workers, or news channels highly dependent on government largesse.

Most insidious of all though is how the ruling party has managed to turn the tyranny of the majority, as JS Mill famously put it, into a science.

Reading Dawn today I’ve come to realise that there is something the Pakistanis have that we are currently struggling with – an awareness of the problems in their country. They might have a military-industrial complex controlling most of the country, but the average Pakistani seems to at least be aware of that, and savvy about how easily a ruling government can control the narrative. They don’t seem to be deluded en masse by an erstwhile charismatic leader who seems to have much to say about the least important things – like the global promotion of yoga- yet remains curiously silent when confronted with slightly more important facts, like the slaughter of Muslims and Dalits.