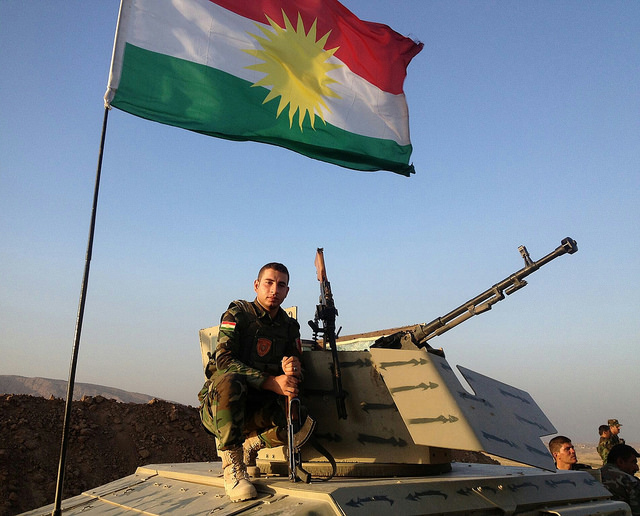 The liberation of Mosul and the continued fight against the last few pockets of Daesh resistance in Iraq is at best a bittersweet affair. While Iraqi Prime Minister, Haider Al-Abadi, attempted to bask in his term’ s most shining moment, it must have been clear to him that the fight for Iraq’ s security had simply shifted into something else possibly even more destructive.

The threat remains that Daesh will simply revert back to less conventional routes, bombarding liberated and never-captured cities with improvised explosive devices. For Abadi though, this is the least of his worries. Urban bombings have become tragically routine in today’s Iraq, and so the bigger existential threat stems from three distinct forces.

From the north, the (legally Iraqi) Kurdistan Regional Government (KRG), led by Masoud Barzani, implemented an independence referendum that was held on 25th September this year. The results were unsurprising, with 91.83 percent of an estimated almost three and a half million voters supporting independence. The Kurds – an ethnic group linguistically, ethnically and historically distinct from the Arab regional majority – have taken advantage of the turmoil in Iraq to strengthen their calls for independence. The federal Iraqi government in Baghdad was against the vote, as was the wider international community (except Israel, which sees in the Kurds a possible ally to fight against Iran). While the vote is unequivocally illegal in the eyes of Baghdad, Barzani has not been clear asto whether the vote will be binding on his government. He has called for dialogue with Baghdad, but Abadi is currently refusing and has issued an ultimatum that airports and landcrossings must be put under federal control.

Abadi’ s militaristic focus on fighting Daesh in Iraq and his diplomatic approach to this crisis is welcome, but fears persist as to how long this can last.

In addition to criticisms levied against Barzani for his poor timing (Iraq has yet to clear Daesh out of its borders), and the obvious unconstitutionality of the referendum, Barzani’ s determination to include several disputed areas in the vote induced a game of brinkmanship between the Kurds and Iraqi Arabs opposed to their independence. During the two weeks before the vote, Prime Minister Al-Abadi increasingly suggested that heis ready to deploy the Iraqi Army in disputed areas. On the day of the vote, a historic session of the Iraqi Parliament called on the Prime Minister to deploy federal troops to the region. Iraqi Twitter has been awash with pictures of a joint Iraqi-Turkish military exercise that hints at their possible cooperation in a future fight against the Kurds. Turkish Prime Minister Erdogan, who is opposed to Kurdish independence because of Turkey’ s own battles with Kurdish separatists in the country’ s southern regions, threatened an invasion as well as economic pressure, including the cutting of a pipeline that has allowed Iraqi Kurdistan to export oil through a Turkish port. However, at the time of writing, it seems that Abadi will not be heeding to the calls of Parliament, and will instead be looking to apply economic pressures on Barzani. Abadi’ s militaristic focus on fighting Daesh in Iraq and his diplomatic approach to this crisis is welcome, but fears persist as to how long this can last.

Every nation’s right to self-determination ought to be respected, especially when it fits international legal requirements (self-determination is legally recognised in cases of colonialism, foreign invasion, or gross discrimination and abuse of human rights; Kurds, at one point or another, have experienced all three). However, it is difficult not to see the various problems with this referendum. Firstly, Barzani’s presidential tenure ended in 2015, and his insistence on leading the charge for the referendum is a way of increasing his tenure without losing perceived legitimacy. Secondly, the inclusion of disputed areas in the referendum means that the risk of conflict is made higher, which is hardly what the region needs right now. Finally, the vote is not only seen as unconstitutional by Iraqi Arabs, but reports and pictures circulated on social media have hinted that ballot stuffing and threats against non-Kurdish voters took place. Whether or not this actually happened is not for me to say: the more important factor is that Iraqi Arabs think this has happened. This will likely lead to more calls for a military option if Barzani pushes through with independence.

From Abadi’ s own Shia sect comes the next threat to Iraq’s future – the Shia non-state armed militias. The plethora of groups within the officially titled Popular Mobilisation Units (PMU) are seemingly split into two broad factions. The first is pro-Iranian, in the sense that they receive arms and munitions from the Islamic Republic, and ideologically support the state’ s brand of political Islam. Meanwhile, the other is anti-Iranian and its ideology blends Iraqi nationalism with Shia political Islam. These militias were ultimately successful in mobilising large chunks of Iraq (there are several non-Shia militias such as the Christian ‘ Brigade of the Spirit of God Jesus Son of Mary’ and 16,000 Sunni Arabs spread around various militias) into aiding the Iraqi Army and Federal Police in their fight against Daesh.

However, two fears mitigate this success. The first concerns a number of pro-Iranian militias who have swam the wave of victory across the border with Syria in their fight as Daesh. The region does not need another paramilitary that is likely to have political objectives that would be disastrous to the region. Secondly, the original intent of Grand Ayatollah Ali Al-Sistani (the global head of Shia Islam and one of the most influential, albeit usually politically reclusive, figures in Iraq) in calling for able men to defend the country following the fall of Mosul and Tikrit to Daesh was for his fatwa- a religious ruling- and by extension the PMUs’ to be temporary. However, nothing suggests that the PMUs are willing to voluntarily disarm and disband. Signs point to their leaders running for election in 2018, and they will most likely be highly successful due to their status as the saviours of Iraq. The Washington Institute, an American Middle East policy think tank, rightly notes that this is “a recipe for long-term instability”, and that “an irregular and confessional army will be part of the political sphere in the country and block any attempts at creating a more secular – or at least inclusive – system”. The country simply does not need more men with guns in parliament. A country with a number of private armies led by politicians will only harm the already low quality of democracy in the country. More Shia politicians and militias will also serve to alienate the Sunni minority.

From Abadi’ s own Shia sect comes the next threat to Iraq’s future – the Shia non-state armed militias.

The final addition to the ails facing Iraq post-Daesh stems from a cold war between the regional superpowers: Sunni Saudi Arabia and Shia Iran. Saudi Arabia and its allies in the Gulf Cooperation Council (GCC) have broken decades-old policy and grown closer to Iraq in recent months. Saudi Arabia opened a land border crossing that has not been open for trade since the Iraqi invasion ofKuwait (since 2003, it would only be open once a year for Iraqi pilgrimage to Mecca). Kuwait itself, has begun a programmeof infrastructural investment and development in Iraq, especially inits war torn parts. The Saudis have realized that shunning Iraq because itis too dominated by the Iranians isno longer a viable strategy, and their rapprochement signifies the creation of another proxy battle state between the two regional powers.

Iran’s political hegemony in Iraq is thus finally being tested. Iran has called the recent closer ties between Iraq and the Gulf countries a betrayal of the Yemeni (Shia) people who have been fighting GCC countries in another proxy war between the two regional superpowers. However, recently Iran has tested Iraqi loyalty with a number of manoeuvres. The most damaging of these was an agreement between Daesh fighters near the Lebanese borders and Iranian-backed Hezbollah that allowed safe passage for the former to Deir ez-Zor, a town situated on the Syrian-Iraqi border. Iraqis saw this as indicating that Iran did not care about Iraqi lives. There are fears that Iran may use its existing PMUs and client political parties to expunge this new Saudi influence. The cold war between the two powers will likely damage Iraq, and will not help with its quest for stability following its victory against Daesh.

What many hoped tobe a unifying moment of victory for Iraq after decades of an oppressive regime, foreign occupation, and tragic sectarian civil war may turn out to be only the beginning of a new fraught period in the Iraqi people’s history. It seems now that there are more angry men than ever before, each with sharply distinct plans for the country and more weapons that can cause calamities in pursuit of those plans. Andif the past is anything to go by, more guns and militias is sadly likely to lead only to more war and instability.