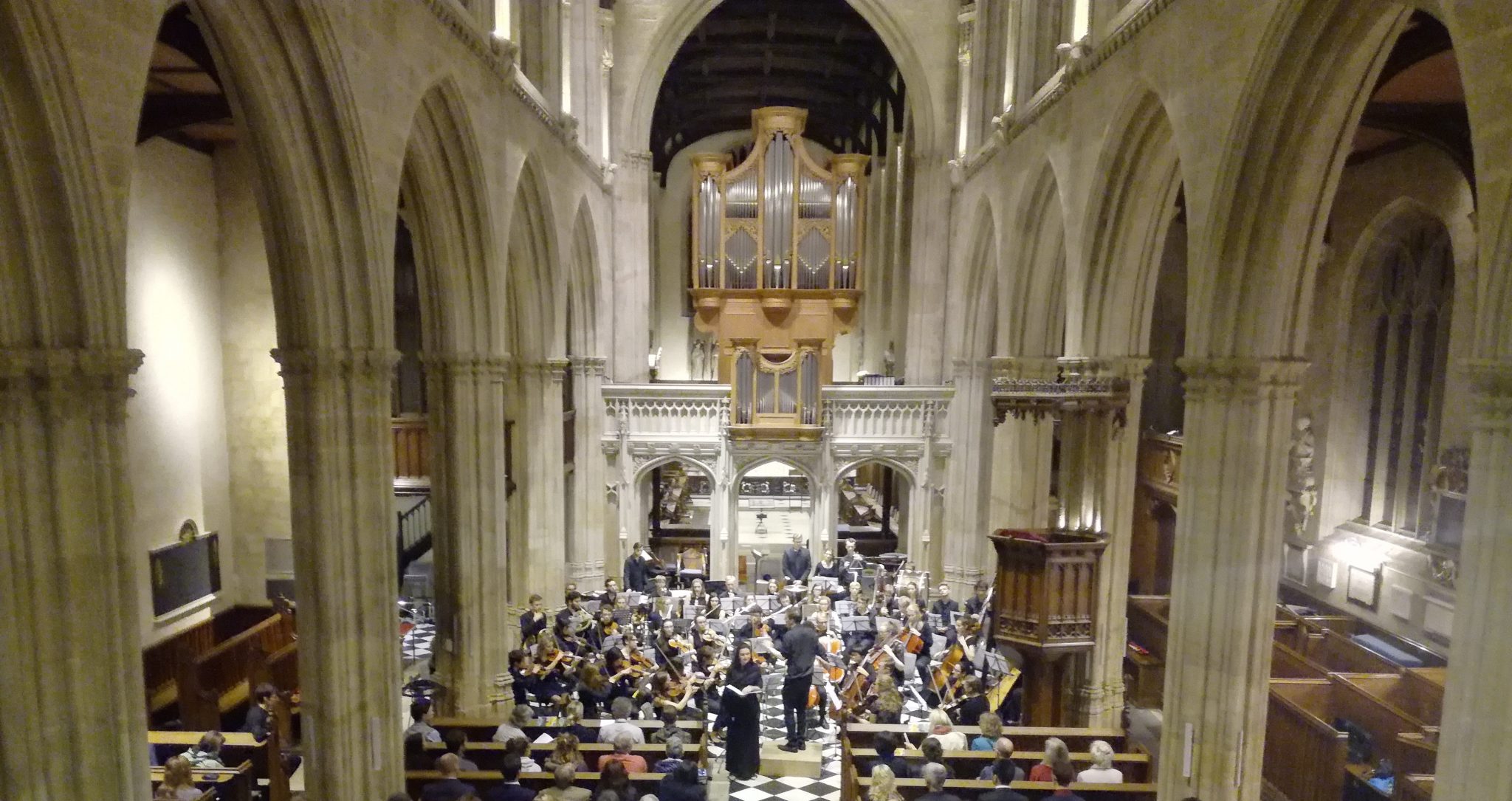 On Saturday 14th, an audience gathered in St Mary’s Church for two reasons: to seek sanctuary from the circus of matriculation going on outside, and to hear some of the best classical music Oxford has to offer. With their concert of Beethoven and Mahler, the Ripieno Players managed to give us both.

Oxford is overflowing with talented young musicians, and the Ripieno Players are the cream of the crop. It’s a relatively young ensemble which debuted in April 2016, but I recognised many of its players from other university performances in which they had not disappointed. No doubt the rest of the audience recognised them too – the excited chatter bubbling around the room suggested that this was going to be a Good One.

Their rich sound seemed to fill the church with warmth even on a cold, autumnal night

The repertoire consisted of two pieces: Beethoven’s Piano Concerto No. 3 in the first half, and Mahler’s Symphony No. 4 in the second. Though Mahler required a few more musicians, both pieces were roughly similar in their sweeping Romantic themes. Perhaps both were chosen because their rich sound seemed to fill the church with warmth even on a cold, autumnal night. Then again, perhaps they were chosen because they are wide-ranging, fast-paced, and technically taxing – the perfect showpieces for the ensemble’s considerable talent.

I last saw Joe Davies, the ensemble’s musical director, in an Oxford University Orchestra performance of Handel’s Messiah, so I was familiar with his lively style of direction. It was a pleasure to watch Davies’ enthusiastic gestures to the ensemble and the equally spirited reactions of his players – as musicians, they seemed genuinely excited to be playing these pieces together. Perhaps it was this sense of camaraderie that allowed them to play together so harmoniously; the strings in particular were impressively tight, thanks in part to the masterful leadership of Bethan Rose.

The spotlight of the first half was rightly taken up by George Needham, the piano soloist at the centre of Beethoven’s piece. A slightly out-of-tune piano at the higher range did not detract from his playing, which was clear and controlled despite the piece’s demanding technical framework. Needham’s expressive performance swept us from the stormy cadenza of the first movement, through the rich tones of the second, into the vibrant flourishes of the finale. In his movements, leaning into the piano or reeling away from it as the music suggested, he brought the piece’s near-incomprehensible complexities to life.

While the three leading performers captured much of the audience’s attention, the ensemble accompanying them were just as accomplished. Matt Venvell’s work on the timpani, which provided the backbone of the piece, was notable in its confidence. The brass and woodwind sections were a little overshadowed by the string section, but they would come into their own later in Mahler, and they set a steady musical backdrop for Needham’s flourishes on the keys.

The woman behind me expressed it best: “Wow.”

Davies, Needham and Rose commanded the Rondo-Allegro – the last and perhaps most technically complex of the three movements – with an emphatic energy. At the piece’s triumphant end, the three grinned, looking as though they themselves had triumphed over the music before them. The appreciative applause which greeted their victory eventually subsided into chatter as the musicians went to break. The woman behind me expressed it best when she turned to her friend at the end of Beethoven and simply said: “Wow.” The musicians who were now mingling modestly around the church had played their showpiece with more fervour and enthusiasm than plenty of professional ensembles – and that’s coming from someone who thought she didn’t like Beethoven before.

They carried this energy and sense of shared fun into the Mahler piece. Before the start, Emma Lisney took over as leader, and the brass and woodwind sections were bolstered with new musicians. As they embarked on the symphony, it became clear on their faces that this piece was just as demanding, and yet just as thrilling to play, as the Beethoven before it. Particular credit must go to Miranda Davies on percussion, as her excitable yet accurate interpretation of the music added some much-needed whimsy to Mahler’s grand symphony.

Mahler’s Symphony No. 4 gave the ensemble the breadth it needed to fill the church with a truly powerful sound – a sound loud enough to remind the matriculating masses outside the door of what they were missing, no doubt. When the musicians were joined in the fourth movement by soprano soloist Sofia Kirwan-Baez, who strode dramatically in front of the orchestra and delivered her part with emotive conviction, the sound only became grander. The movement represents a child’s view of Heaven, striking a somewhat sombre tone which differed conspicuously to the joyous ending of the Beethoven; the players under Davies’ direction proved capable of drawing out the emotion written into both pieces.

When the piece came to a close, Davies appeared to be overjoyed once more at its success. He had conducted with no sheet music for Mahler – an indication, perhaps, of the time and dedication that he and his ensemble had put into their work. Davies, Lisney, Kirwan-Baez and the rest of the Players received their rapturous applause over three encores. It was a well-deserved reception for a concert that was vital in both senses of the word: essential listening for any classical music fan, and a vibrant expression of life through music.

Freshers, take note: if matriculation kept you away this time, make sure you catch this troupe during your time at Oxford. The Ripieno Players have established themselves as frontrunners in Oxford’s ensemble scene, and I am sure we will see its brightest stars go on to much greater achievements yet.