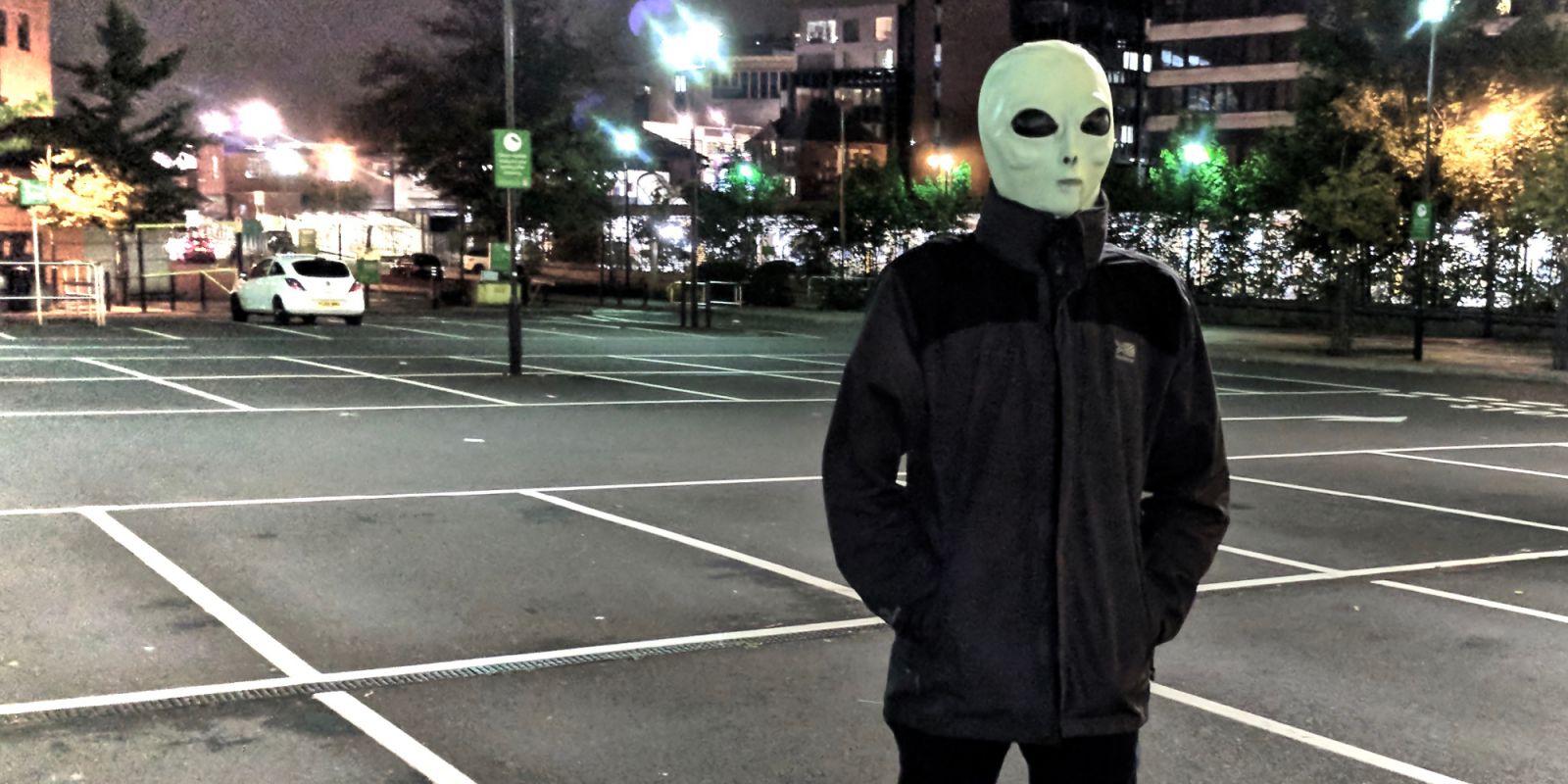 Lights Over Tesco Carpark: A Play About Looking Up

Walking into a rehearsal of Poltergeist Theatre’s latest production, Lights Over Tesco Carpark, is a bit like walking into a room of sunshine, but somehow more surreal. Director Jack Bradfield, and his cast of four endlessly funny actors, have had 3 weeks to devise an hour-long show, starting from scratch… well, scratch, and aliens. The play they’ve come up with centres on the question of whether there’s extra-terrestrial life, but in the way that modern Christmas centres on the birth of Christ; whether you’re into aliens or not, you’re still going to have an incredibly, once-in-a-year-worthy, good time.

But when Lights Over Tesco Carpark labels itself as a devised comedy, that doesn’t quite do it justice. Devised comedies can end up feeling like a series of gags; the sections I saw were the complete opposite. The play is honestly, unpretentiously funny, the actors seeming to specialize in never actually trying to make you laugh – you just can’t help it. Hilarious, surreal, and heart-warming, the play focuses on human connection, asking us why we believe, and count as true, what we do, and on why – for pretty much ever – we’ve never been able to escape the idea that there’s someone else out there.

According to the cast, the devising process was both fun, and incredibly fair; everyone’s ideas were tried out, and there isn’t a single section of the play which they don’t all – unanimously – like. Having someone there who wasn’t performing, however, was apparently crucial; while the cast, Bradfield, and producer (Charles Pidgeon), would discuss, experiment, and devise together, Bradfield could solidify their work into one cohesive play. Working off the actors’ material, and their request, Jack – a writer, and member of the esteemed Royal Court young writers’ programme – also wrote 4 monologues, from real-life accounts of alien-interaction, to make sure the piece still included the genuine human contact that the play is all about.

One piece of material which came to the play already prepared, however, is a phone-call interview recorded at the start of the devising process, with Robert, Oxford resident and frequenter of Magdalen Road Tesco carpark, and reporter of suspected-UFO sighting in early June, 2017. Alongside material like this, which felt so genuinely human that I would have happily spent an hour just listening to the actors chat to him, I was also shown a scene devised only recently: the play’s ingenious (and delicious) method of forming contact between alien and human (or, more accurately, audience) life.

In this production – which has the intimacy of a scratch show and the polish of a professional play – audience interaction is key. The sections I saw were so well-delivered that I wasn’t sure whether I was about to be fed my favourite food, abducted, or head off home with an incredibly supportive husband (Rosa Garland). If you’re not planning on going to see Lights, I thoroughly advise you change your mind; if you are – and don’t mind getting on stage – I recommend sitting near the front…

Lights Over Tesco Carpark will be performed on the 24th and 25th October, at the North Wall Arts Centre.