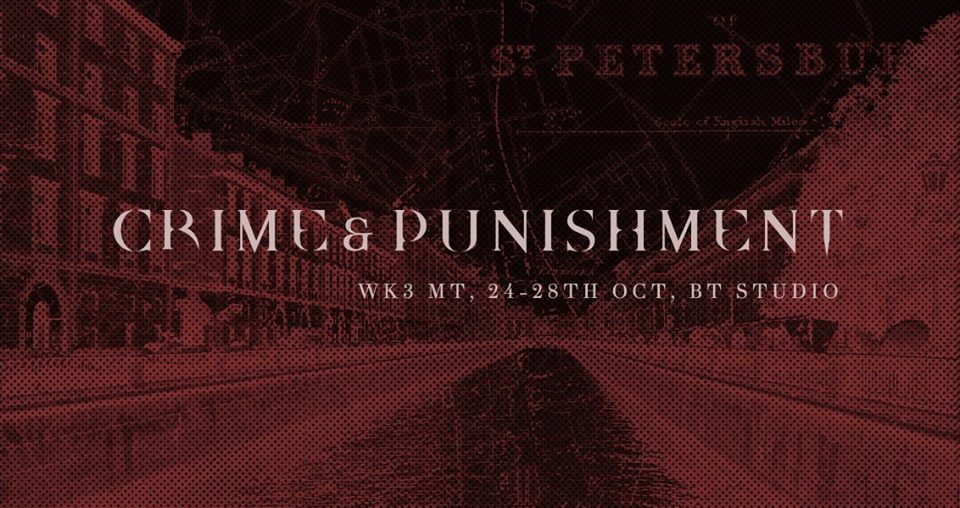 Fyodor Dostoevsky described his titanic novel Crime and Punishment as a ‘psychological account of a single crime’ – and this adaptation, put on by the Corpus Christi Owlets, distils the story down to this essence.

The original book is a 500-page monster that has long frustrated students with its whole chapters of meandering interior monologue or aimless wandering around the backstreets of downtown St Petersburg. It features 15 characters with dozens of patronymics and diminutive nicknames to forget, long periods of letter-reading, enough big ideas to give you a headache, and a predictably moralizing conclusion.

How can such a cumbersome beast of a narrative be taken to the stage? Director Frances Livesey, who knows the novel inside out, says it would be ‘completely unfeasible’ to stage the story in this form. Luckily Marilyn Cambell and Curt Columbus have taken an axe to the source material, ruthlessly amputating several gristly sub-plots and supporting characters. We are left with a prime tenderloin cut of drama – trimmed of fat, but richly marbled with the more compelling intrigues:

Rodion Raskolnikov is a penniless student who has axed two people to death and seems to have gotten away with it. He sits across the table from local Chief police inspector Porfiry Petrovich, who suspects Raskolnikov but has no solid proof. In an intricate cat-and-mouse interrogation, Porfiry attempts to bait his prey – but extracting a confession from the student will not be easy. Raskolnikov is sick. He is deliriously sleep-deprived and feverish, intoxicated with righteous fury and delusions of grandeur, and lovesick for his guardian angel, Sonia – a shining beacon of moral selflessness, forced to prostitute herself in the filth of the Petersburg slums just to feed her family. As Porfiry’s mind-games commence, so too does a series of flashbacks and day-nightmares that take us through the crime from Raskolnikov’s perspective, filling us in on the action and bringing us to a final showdown between murderer and detective.

So the adaptation is lean and mean – but several challenges remain for the Frances and her cast. For the actors, there is the task of playing multiple characters. Tom Fisher shape shifts from the imperious, wolfish Porfiry to Sonia’s father, the jolly, masochistic drunkard Marmeladov, and back again. Tom has to interrogate Raskolnikov not just from the outside, as Profiry, but also from within the student’s own head – he appears in our protagonist’s flashbacks as ghostly apparitions that drive the murderer mad with accusing whispers.

Nicole Jacobus is charged with portraying all 4 female characters in the play. Two of her characters love Raskolnikov unconditionally – and all of Nicole’s subtlety is required to differentiate Sonia’s Christ-like love from the worrying affection of Pulkheria, our protagonist’s mother. She also has to hit the other end of the spectrum to embody Alyona, the viciously greedy pawnbroker that profits off the last trinkets of the downtrodden.

Staś Butler exclusively plays protagonist Rodion Raskolnikov – however this role comes with the tiring task of being present on-stage for the entire 90 minutes. This is no small feat, but rather than wilting, Staś uses the exhaustion to feed Raskolnikov’s hysterical tirades and sleep-deprived hallucinations. He also shoulders the burden of being our principal narrative vehicle, as it is through his visions that we discover the preceding sequence of events. By tying our perspective to Raskolnikov’s, the play sucks us into his state of mind, and the result is genuinely disorientating and trippy. Before long we begin to question which characters are actually present, and which are imagined spectres that feed on Raskolnikov’s guilt.

Staś, Nicole and Tom have to switch states of mind not only with changes in character, but also with each jump from reality to flashback. To complicate matters further, the cast has the challenge of acting out characters that are, in turn, putting on an act. Porfiry, for example, is convinced of Raskolnikov’s guilt, but hides this certainty in order to string him along with his interrogation. Raskolnikov and Sonia, under the intense scrutiny of the detective, have to play the part of uninvolved innocents. This atmosphere of mutual suspicion, and each character’s inability to show their true colours, sets everyone on edge.

For the director, Frances Livesey, the challenge is to do the text justice, but make the play new and different. She considers the play to be, at its core, ‘about a young man taking an axe to the fabric of society.’ The cast agrees that the elements of social commentary in the play are key – they explained to me that Dostoevsky is sympathetic to Sonia and Raskolnikov, who are pressed to commit crimes because of the cloying, maddening nature of their poverty.

Dostoevsky’s St Petersburg is a grimy, claustrophobic city where crimes breed and multiply like rats. The production team have worked to evoke this mood with period costume and a colour scheme of grotty greys and greens. Lighting is used to pick characters out or allow them to drift into shadow according to the shifting focus of Raskolnikov’s recollections, creating the impression that the protagonist’s inner demons lurk in the darkness of his subconscious. The original score, composed by Natasha Frank, uses themes that are repeated and twisted as we move from reality to flashback, which helps to guide us smoothly through the sequence of strange visions.

From the opening scene of the play an axe quite literally hangs over the drama. The weapon sits above the actors as an ominous symbol, waiting to drop, until sure enough, Raskolnikov reaches up, grabs it, and commits his iconic murder.

Crime and Punishment is an epic tale of hubris and redemption – by staging it as a 90 minute play, Frances and her team have to cram huge significance into every little moment. They have approached the challenge with admirable intensity. The result is equal parts psychological thriller, social commentary and ethical debate, all condensed into a shot of dark drama that will leave you dizzy, but exhilarated.

Crime and Punishment will be showing from the 24th – 28th October at 19:30 at the Burton Taylor Studio