Warning: mysqli_query(): (HY000/1030): Got error 28 from storage engine in /home/oxfordst/public_html/wp-includes/wp-db.php on line 2007
 Oxford fights back against Daily Mail's anti-Brexit attacks – The Oxford Student
Skip to content 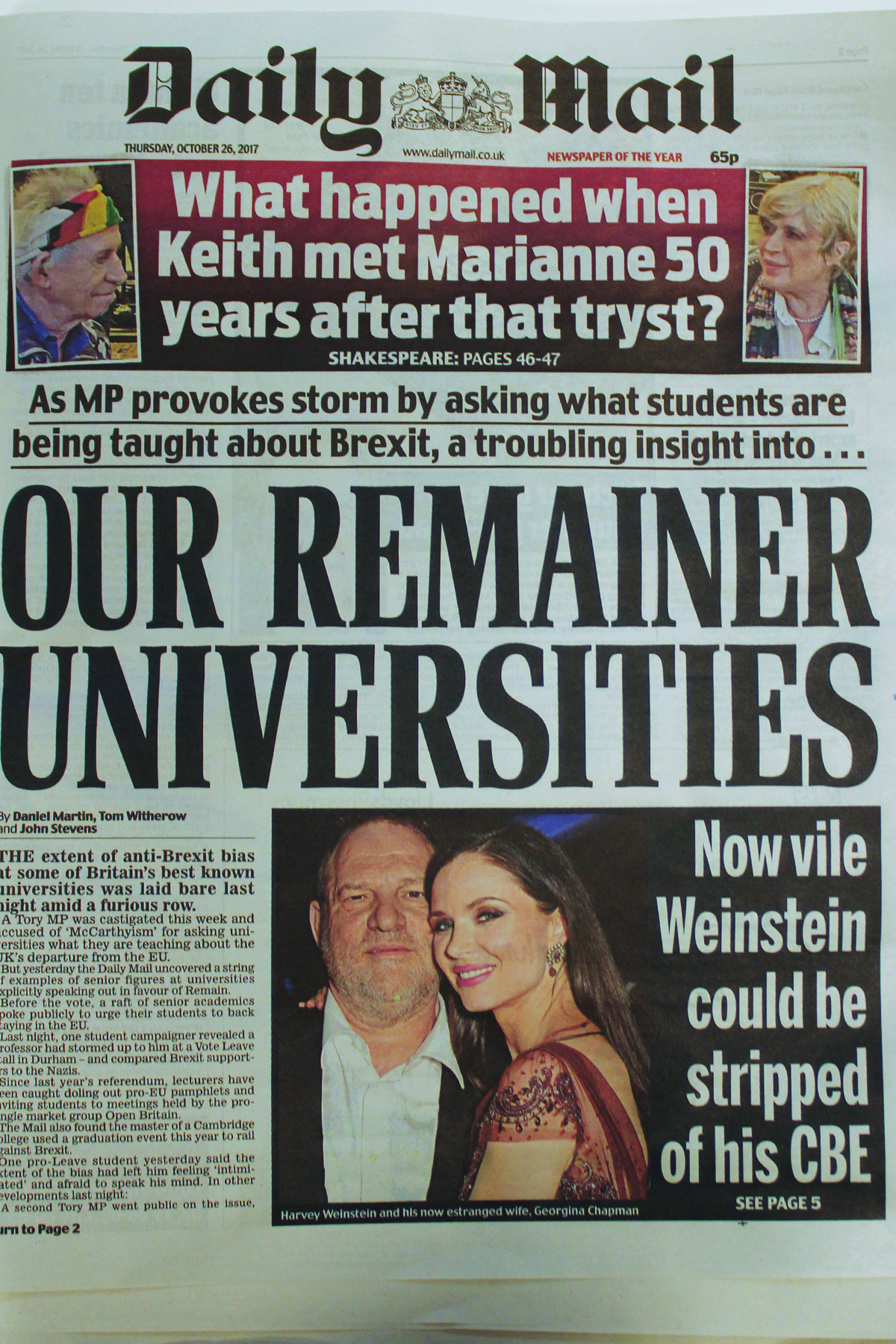 Heads of Oxford colleges and students from across the university have this week made their feelings clear in response to a Daily Mail front page that accused the university of spreading “Remain propaganda.”

The original Mail article, headline “Our remainer universities”, cited a long list of professors and heads of colleges who have supposedly been pushing anti-Brexit propaganda in the university system.

It highlighted academics supporting remain heavily, and allegedly handing out pro-EU leaflets in lectures and encouraging students to get involved in Open Britain, the remains of the Remain campaign from last year.

Will Hutton, Principal of Hertford College, was accused of being a “leftie” along with several other heads of colleges across both Oxford and Cambridge. In a statement to the OxStu, he said that “Academic freedom and the capacity to think for ourselves cannot be suspended by the result of one referendum.”

Will Hutton said that surrendering to the Mail’s demands would “betray our vocation and what we are – the road to ignorance and the serfdom of the mind.”

“The freedom to research, to follow where evidence leads, to argue, to be challenged, to exchange ideas freely and to disseminate the results is at the heart of academic life. The life of the mind knows no borders.

“Academics, and those in leadership roles within universities, must continue to think – including and especially about an event as seismic as Brexit – however discomforting the reflections for some politicians or newspapers.

“They support their arguments with the best evidence they can marshall: and expect challenge. But they can never and should never stop. That would betray our vocation and what we are – the road to ignorance and the serfdom of the mind.”

Mark Damazer is Master of St. Peter’s College, and in a phone interview he struck a more conciliatory tone. He said that “the press can express any views they want and I’m totally in favour of that,” although was doubtful that freedom of speech was under any serious threat at universities.

“Looking at the reaction to Chris Heaton-Harris’s letter, and not just from universities but also from Downing Street, gives us some sense that this isn’t something that’s going to gain traction in the country,” he said.

The UK university sector receives over £1 billion in research funding from the EU every year.

In a totally fool-proof plan, they encouraged students to submit their own stories of anti-Brexit bias to university@dailymail.co.uk.

The article comes hot on the heels of a letter from Chris Heaton-Harris, a staunch Leave-supporting Conservative MP, to the vice-chancellors of universities across the country asking to see wha they taught about Brexit at their universities.

Chris Patten, chancellor of Oxford and a former Conservative Cabinet minister, accused Heaton-Harris of “idiotic Leninism,” while other university heads described the letter as “McCarthyist” and refused to comply with the request.

“If they truly value free speech, they should give a voice to some of the millions of EU citizens in the UK living in fear of the consequences of Brexit.”

Marianne Melsen, Oxford SU VP for Graduates and International students, said in a statement to the OxStu: “Whilst we can debate what academics are or are not teaching students about Brexit, it is more important that universities and the government are working on shaping the outcomes of a deal that addresses student concerns, including funding, immigration rights, access to the year abroad scheme and how it will affect students with families. Supporting international students is part of my role and I’m going to undertake a small research project into Brexit and its impact on students later in the year.”

Also this week, the Daily Telegraph falsely accused a Cambridge University student and CUSU officer, Lola Olufemi, of pushing through a reform to a postcolonial literature seminar that would have excluded any white authors.

The Telegraph issue a correction on Thursday, clarifying that what she had submitted were no more than recommendations, and “neither they nor the open letter called for the University to replace white authors with black ones and there are no plans to do so.”

Both events have been perceived as part of culture war against universities, spurred by their high percentages of young people and people with liberal views. In the 2016 EU referendum, Oxford voted over 70% in favour of Remain.

Universities have been accused of curtailing free speech on campuses for several years, with issues such as no-platforming speakers and protesting other guests coming to the fore.

The universities minister, Jo Johnson, has recently unveiled proposals aimed at enforcing the protection of free speech in universities.