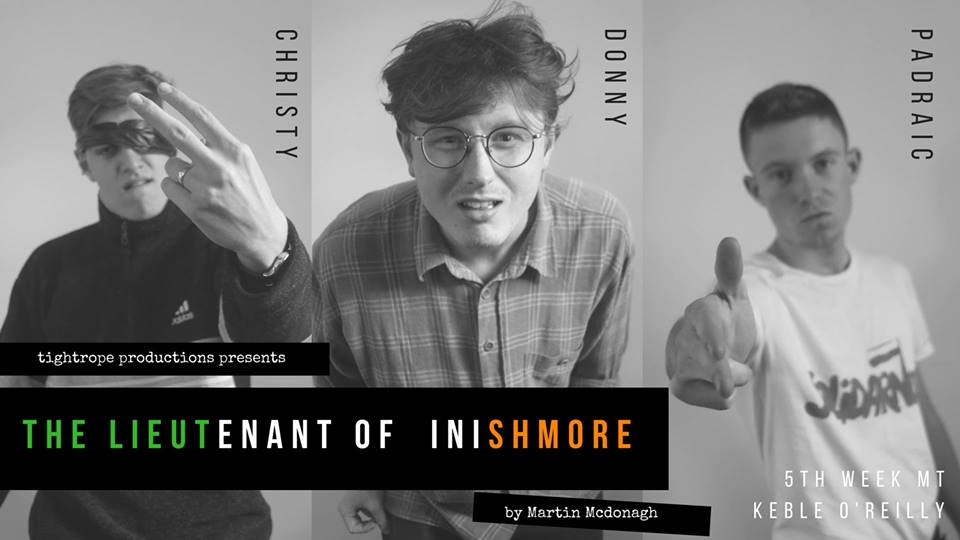 Playing in 5th Week from Wednesday, November 8th, to Saturday, November 11th, at the Keble O’Reilly Theatre, The Lieutenant of Inishmore is Tightrope Productions’s full text performance of Martin McDonagh’s intensely fast-paced, brutally violent, and often staggeringly funny 2001 play about a series of increasingly escalating violence in the small Irish island of Inishmore after one cat shows up with a section of its head open.

Whilst that might seem absurd, the time is the early 1990s, and the cat in question is Wee Thomas, the only friend of Christopher Page’s “Mad” Padraic, a terrorist, torturer, bomber and killer for the Irish National Liberation Army, a man barely out of his teenage years, and so mad the IRA have refused him. Played with both intense and childlike rage, and an equally intense, childlike sense of fair-play by Page, Padraic, and his brutal, barely coherent violence, is exactly the sort of figure who almost singlehandedly turns a cat’s death into a drama with more corpses than survivors by the final scene’s close. However, Padraic and his quest for a questionably justified revenge are not alone in the unfolding violent humour and humorous violence of the play. Joining him is his father, Hugh Tappin’s comically defeated Donny; Davey’s partner-in-crime Aaron Skates’s unfortunate, scared and floundering Davey, desperately trying to avoid Padraic’s wrath whilst forming an unusual bond with Donny; Davey’s 16-year-old sister Mairead, played well by Kate Weir, whose violence towards her brother is matched only by her romantic appreciation of Irish freedom movements and her intense but irrational love of animals; and Padraic’s fellow INLA paramilitaries, played by Chris Dodsworth, Cameron Spain, and Patrick Orme, whose complicated, contradictory morals often cause some of the funniest jokes in the entire play. Joining these characters for one scene is Peter Madden’s James, a drug dealer who suffers both some of the play’s most brutal violence and the play’s most pointed juxtaposition of that with the mundane.

If that brief description of the plot and characters, alongside some of my own descriptions of a cat’s fate reveal anything, it’s that The Lieutenant of Inishmore is a singularly brutal affair, not for audiences uncomfortable with some blood and dismembered limbs. However, McDonagh’s play mixes this violence with contradictory impulses, a cultivated sense of the absurd and childlike as the various characters, none particularly deep philosophers, deal brutal but apolitical violence to each other without fully engaging with the nature of the violence, and an equally cultivated mundane ordinariness, as conservations switch from brutal detailing of torture to pet care, with both being treated with the same amount of detail and focus. This creates a world that is both clockwork in plot construction, with very few lines of dialogue not being eventually brought back in to play a larger part, as it is anarchic in tone and feeling.

The cast, under director Philippa Lawford and producer Kiya Eveans, are able to match this heightened world, with physical performance, blocked across the entire stage to show the extreme highs of all emotion, and the physical nature of the violence. All deliver strong performances, tapping into the comedy of the play whilst still allowing for some of the violence’s horror to be felt by an audience.

It appears then that Tightrope Productions is shaping up a fun and enjoyable evening for 5th Week, for all those who don’t mind a mostly apolitical play about Irish paramilitaries, with a penchant for violence that is both disturbing, funny and disturbingly hilarious. The production captures the anarchic spirit of McDonagh’s play, and will be enjoyed by those whose tastes align with it.