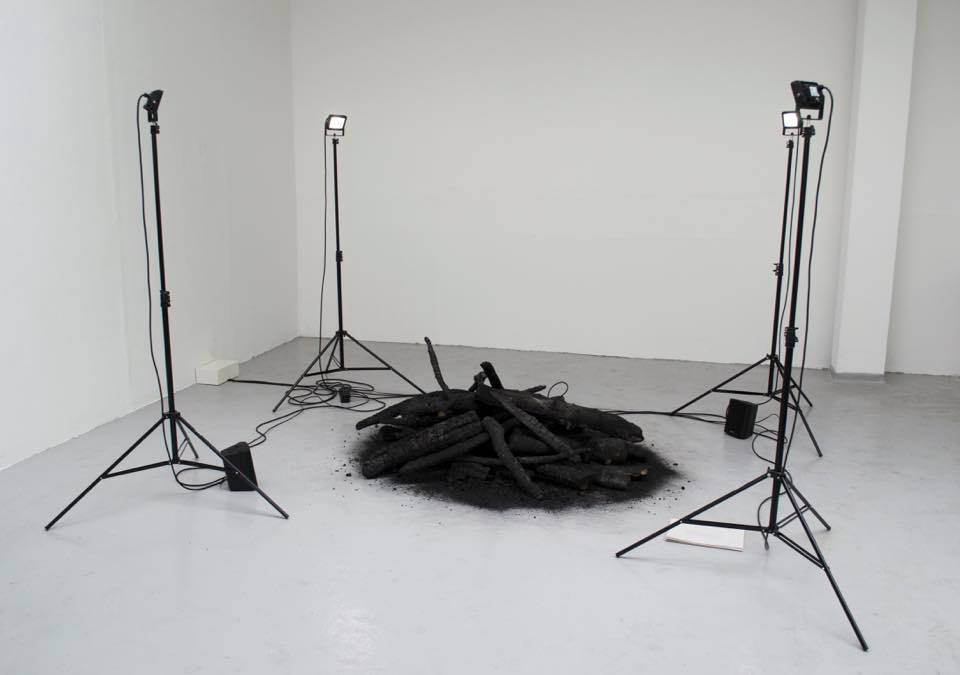 I will hold your gaze

What does queer art look like? I found out in the multimedia exhibition ‘I will hold your gaze’ and spoke to Lily Waite, its curator.

The exhibition satisfies both the scientist and the artist within the observer, and I left feeling like I’d just left the studio of a Renaissance polymath. That is, if Leonardo da Vinci had been a trans woman in modern-day Chelsea.

‘This exhibition was intended to not just be a celebration of trans artists, but also a show of defiance and strength, and existence.’

‘This exhibition was intended to not just be a celebration of trans artists, but also a show of defiance and strength, and existence.’

‘I wanted to help educate cis people – any and all authentic insight into trans experience is incredibly important for a cis audience to see, to help break down stigma and prejudice. I also wanted any trans or non-binary people who saw it to see our community represented by ourselves as that’s so, so important.’

These polaroids follow a gender transition. But somehow, medical themes weren’t as intimidating as they should have been – because the people were smiling and laughing, and surrounded by images of peace and nature.

‘Most trans people want surgery at some point in their life, some get it and some don’t, and some don’t even consider it, for a number of reasons. It’s rare to find trans people who don’t suffer gender dysphoria (which then often leads to a desire for surgery to alleviate this) but some are comfortable with their bodies. Some find that hormones do enough to make them happier in their bodies. It’s evidence that there is no one homogenous trans experience, or body, for that matter. This is especially true for those who are non-binary; some are completely happy within their bodies, but are still NB, or some undergo various surgeries, but are still NB. We’re all different.’

‘To me, ‘Uninvited’ is about self-celebration and the subversion of gender roles and norms. It calls into question the roles of gender within attraction and desire, and how gender presentation can affect that. If it were to be called sexual at all, I would say it’s Michele taking control of their sexuality. This is vastly different to hypersexualisation, which I refer to as both imposing sexualisation upon and increasing the sexualisation of an individual or individuals, which can lead to them being viewed solely as sexual objects, which can lead to harassment, assault, violence, rape and murder. At the very least, it’s dehumanising.’

‘The work is a very personal project about his relationship with his mother – his traditional Russian family has always rejected his identity as trans, gay, and queer. The work is an ongoing series of postcards addressed to his mother, but never sent; they would have been sent in the knowledge that they would only have been destroyed. It’s incredibly moving work, and one of my favourite pieces I’ve seen this year.’

This colour-changing, proud, vascular figure is one of joy, following a difficult but rewarding gender transition.

These non-binary figures are displaying their gender-ambiguous genitals without shame. Genitals don’t matter, and this work tries to show that by showing them.

‘You built the pyre, you lit the match (I set myself on fire)’ – Lily Waite

‘My piece in the exhibition refers to the violence which the trans community faces, especially trans women (and disproportionately trans women of colour), as well as dealing with the issues of trans representation, the destruction of past identity, and the representation of the trans body using abstraction.’

‘’The burnt wood references a funeral pyre, or a fire upon which a witch may have been burnt (I wrote a poem a short while ago drawing parallels between the witch hunts of Salem, 1692, and the persecution of queer people today). It also explores the issue of how to show a trans body when the body isn’t there; how to draw parallels and using abstraction to reference our bodies without using the same old tropes of ‘the big reveal’ and the obsession with trans genitalia and surgery.’

What’s the difference between femininity and womanhood?

‘For some trans people to be perceived as their gender and not their sex assigned at birth, they ‘perform’ within the gender binary: as a trans woman, I wear feminine clothing, makeup, and I ‘inhabit’ a female role. I feel a strong sense of femininity, as many cis women do, as well as exhibiting some masculinity, but femininity isn’t my gender. I would argue that a feminist view of womanhood is that it is the individual’s to define – I am not biologically female, I don’t menstruate and cannot give birth, but that doesn’t lessen my womanhood. Gender is whatever it means to you. My female gender, to me, means that I am perceived as female, and whilst I have a different experience to the majority of women, my womanhood is no less valid. You don’t have to be a woman to wear a dress or makeup, and you don’t have to wear a dress or makeup to be a woman. You can do what you want, and you’re still the gender you say you are.’

How can everyone make life easier for trans people?

‘Educate yourselves. Not just on the bare bones of it – read up on trans rights issues, and other things that are affecting our community. You’re at Oxford, you’re clever, I’m sure you’ll get your head around it!  It’s supportive, and shows you care.’

‘Above all, be an ally. Call out transphobia, stand up for trans people, even when they’re not there to hear it. Educate others about trans issues – it shouldn’t just be us doing so!

Finally, learn when to step back; this is primarily our battle, so sometimes, we need to have the loudest voice. That’s not to say you shouldn’t be right there behind us, though.’

What are you working on next?

‘Curatorially, I’ve got a couple of ideas including a couple of collaborations (one of which with a great friend who does great work for our community, which I think will be amazing), and also a similar project to this, but on a larger scale, with international artists. I don’t think I’m going to stop working with trans people for a while; no one’s giving us space to exhibit or engage in these discussions, so I’m just going to do it myself./

‘We need this space, and we need someone to find it, so, I’ll keep going.’