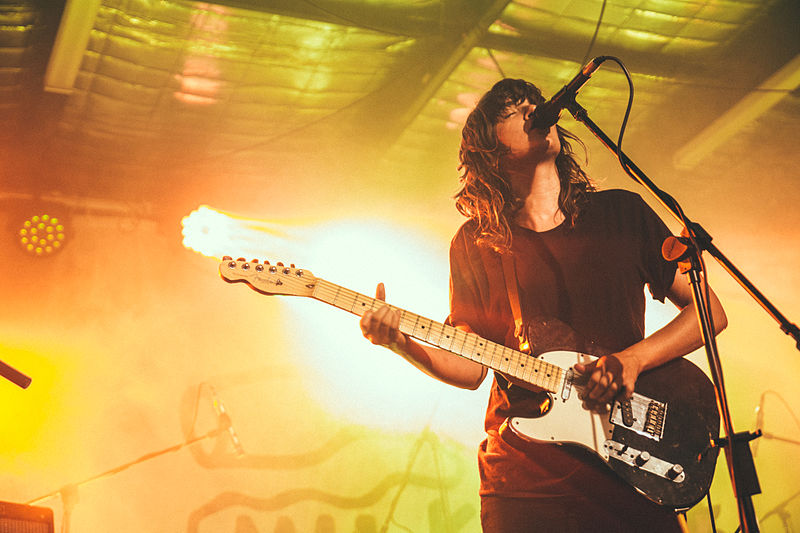 The only bad thing about Lotta Sea Lice is in its prompting of a revival of that goddawful “Kurtney” Cobain and Love portmanteau. Mercifully for the listener, the record recalls the Travelling Willburys more than Nirvana or Hole, both in its sound and in its casual, hootenanny knees-up aura. In Kurt Vile and Courtney Barnett, we have two of the brightest (and most ironically detached) songwriters today collaborating as if they were always meant to play together, and as if they had the time of their lives doing so.

Of course, no one would have imagined it happening this way. When Courtney and Kurt first announced that they were working on an album together, and would even subsequently tour it, the general reaction was one of surprise. No rumours preceded the announcement, nothing through the grapevine even suggested they had even met each other too often if at all. Yet in the aftermath of its announcement, the partnership began to make sense in retrospect. Both artists have an exceptional air of stoned allure; both write songs as if they are having a conversation with the listener, and both mine a rich vein of rock music replete with jangly, twangy guitars and distorted freak outs alike. If Courtney tends to the more upbeat and steamrollering side of the rock and roll spectrum, and cuts the introspection with witty dissections of the minutiae of the quotidian, Kurt’s stoned navel gazing and languorous air make him no less a perfect musical kindred spirit for her. On paper, therefore, they looked like an unexpectedly apt fit.

The impression is no less apt on wax. The noodling and intertwining riffs are a thing of joy to behold; it’d take an exceptionally obsessed listener to guess as to whom each part belongs, though that hardly diminishes the fun of giving it a good go. As guitars intertwine, so do their voices: Courtney’s melodiously antipodean singing voice contrasts with Kurt’s gritty, lazy drawl, harmonising with each other as they twist each others’ lines and toss them back at each other like kids on a playground. “I’m walking home like a bruised ego” brings the rejoinder of “I’m feeling inferior on the interior”; sung in unison, “or maybe it’s just me” feels like a wholehearted affirmation of the joys of friendship and kinship rather than the face value yearning and alienation. The last track’s title, ‘Untogether’, feels both like a sly nod to their obvious musical compatibility and a rebuke to those who automatically assumed some romantic component to their partnership when Lotta Sea Lice was first announced (Kurt is married with two kids and Courtney is openly lesbian, running Milk Records together with her partner and fellow singer-songwriter Jen Cloher). On it, reverb drenched slide guitar brings the best of Peter Green era Fleetwood Mac to the table, whilst Kurt and Courtney harmonise their successive neologisms: “you can’t save the unsaveably untogether”. A live performance broadcast through Pitchfork, with Kurt and Courtney and a full band running through the album at the beach, even recasts some of their best-known solo songs in the light of Lotta Sea Lice: juxtaposed, the likes of Barnett’s ‘Depreston’ and Vile’s ‘Life Like This’ seem like two pieces of the same jigsaw fitting together perfectly, as if they could have fitted on Lotta Sea Lice just as easily as they do on Sometimes I Sit and Think or b’lieve i’m going down…

Lotta Sea Lice is, above all, an intimate record. Studio chatter and studio laughter rings out in between cuts, and at times it feels like we’re being treated to a sneak peak of Vile and Barnett fucking about; despite containing the most sincere exhortation on the album, it’s hard to take ‘Blue Cheese’’s affable silliness seriously, where Kurt jokes about “calling the cops on you” and Courtney brings out a nice ironic “whoo” before a Sitting on the dock of the bay tier pisstake of a whistling solo, all before a remarkably wheezy harmonica interlude pops in; the track ends with a stock Macintosh beep. On ‘Peeping Tom’, you even get the impression that Courtney is pulling off a highly commendable impersonation of Kurt, who doesn’t even appear on the wholly acoustic track. The usual pitfalls of intimacy, to wit, the inability for the listeners to relate to the artists’ navel gazing, are nonetheless sidestepped: Courtney and Kurt’s mutual ruminations rub off as an affirmation of the potential to find pleasure amongst the boredom of daily life. For that, and for a record that holds its own with each artist’s individual discography, we should be thankful. Here’s to more.