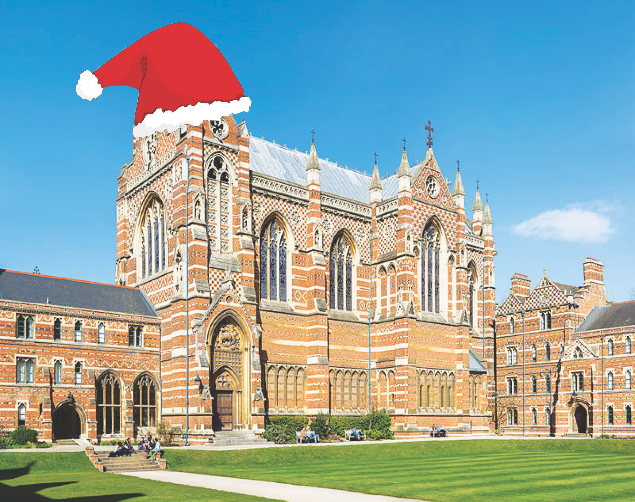 Oxmas is one of those traditions that Oxford is so proud of. Every year, to celebrate the fact that colleges need to maximise their conference incomes over the holidays and so can’t carry on teaching us, we have our own little Christmas a month before anyone else. Aren’t we lucky? Two Christmases! Institutionalised good cheer is without a doubt my favourite kind.

And so we gather round dining tables, troop about the Christmas market on Broad Street without buying anything, get unnecessary amounts of tinsel and fairy lights to limply decorate our rooms with, start having mulled wine rather than regular red wine at pres, pack into the Sheldonian/college chapel/Half Moon to sing Christmas carols wildly out of tune – a whole month before anyone else gets a chance to.

Such an extended period of cheeriness probably has downsides, but you’d be hard pressed to get any Oxford student to admit it. By 7th week does anyone really care if your essays are late? Tutors are busy with admissions so they aren’t that bothered any more. It’s cold and rainy, but it’s your first taste of that after the summer so you’re not that sad about it (unlike Hilary cold where you can literally feel the life sapping out of you).

The University, upholders of Oxmas’s repressive ideology… reminded us who held real power in Oxford – not good cheer, but academic rigour.

But, my friends, it has come to my attention that Oxmas is a deeply flawed tradition. For many, it is the start of the Christmas season; the celebration of Jesus Christ’s holy birth in a ditch and/or some weird pagan thing with flying reindeer and slave elf labour. But how can both be the same? Christmas is an ancient tradition stretching back millennia, and yet in Oxford we seem to forget that such a heritage exists. We destroy the work of thousands of years of ritual in favour of our own chance to gorge ourselves. Christmas has been usurped by the same privilege that sees Oxford stay up all night on May Day and throw up on our matching freshers t-shirts. Christmas is a sacred time, and the attempt of Oxford to whitewash it has gone too far. It’s time that Oxmas faced up to what it really is, and what any good person should call it: Christmas.

We’ve come a long way since the start of Oxmas, but throughout it has been a fundamentally disrespectful term for the holiest of holidays. In the fifteenth century, the monks that populated many colleges would shave their heads into the shape of tinsel to celebrate Christmas, but were forced to have ‘Oxmas’ branded on their foreheads to remind everyone what the real holiday was. Of course, the colleges don’t want you to know that, but their silence speaks volumes.

By the Victorian era, where Oxford was undergoing a renaissance and new colleges were being founded left right and centre, attitudes had hardened even further. Keble’s famous red and white colour scheme was not an attempt to look like lasagna at all – instead, it was a deliberate move to celebrate their Christmassy founding fathers, who were disciples of St Nicholas himself and hoped to attract his patronage with their choice of brickwork. But the University, upholders of Oxmas’s repressive ideology, forced them to dismantle the permanent masonry fir tree in the centre of quad as an offensive reminder of who held real power in Oxford – not good cheer, but academic rigor.

Even today, Oxmas has usurped Christmas in its privileges and its customs. How can the former claim that crackers are part of its own culture when good Christmas-supporters have been practicing it for generations. This is the war on Christmas incarnate – the heathens that support Oxford are undermining the central pillar of Western society, the glue that binds civilisation together – Christmas. Oxmas must end, to save us and all our souls.