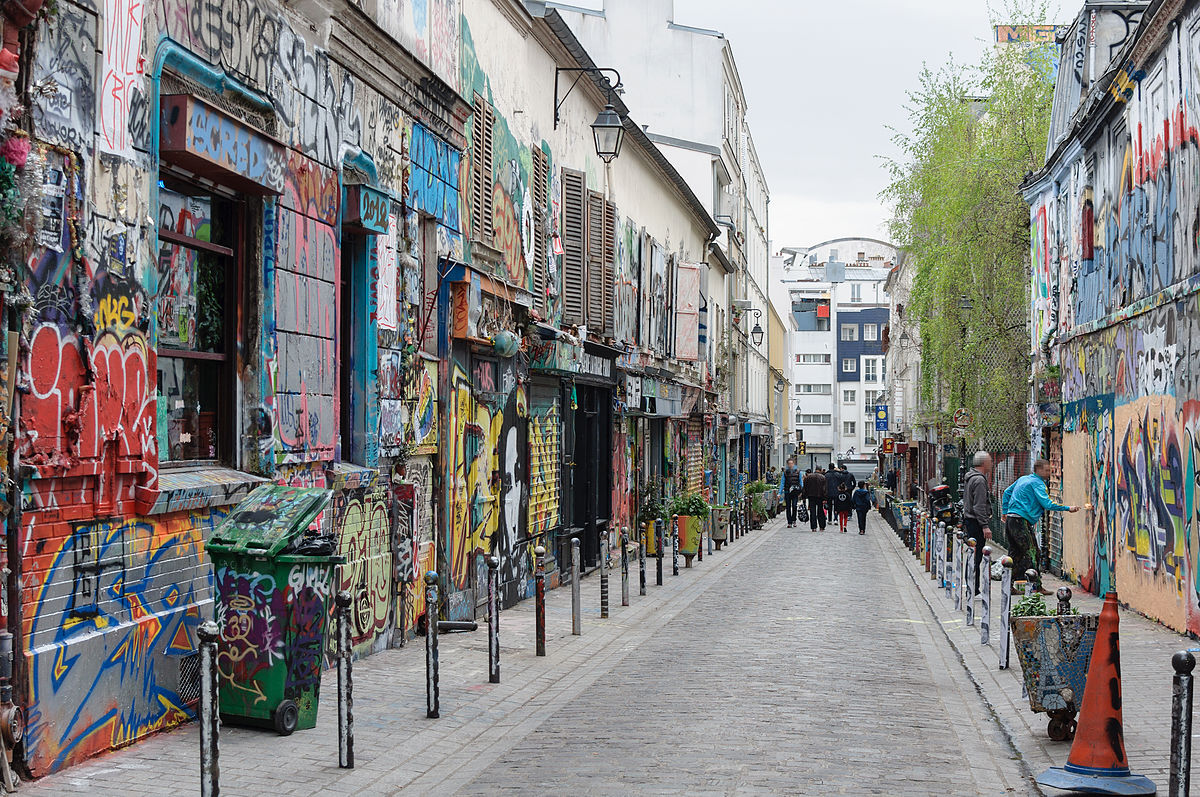 The real face of Parisian prostitution

When walking along the Seine, it is easy to see how Baudelaire may have thought art was prostitution. A myriad of vendors sell identical sketches and paintings of prostitutes lounging in the nude, smoking cigarettes and laughing amongst fellow prostitutes and clients. These images, created by artists at the turn of the century, undoubtedly present a romanticized image of the parisian women of the night—one that is far from the lived experience of the city’s prostitutes today.

In the Parisian neighborhood of Belleville, an abundance of Chinese women loiter the sidewalk in matching jackets and high-heeled boots, looking to make enough money to buy some food.

“There people are just like everyone else,” Donatien tells me as he sits down in front of me in the neon lit café.

I first met Donatien at “Aux Follies”, a historical Parisian café by day, and bar by night located at the heart of Belleville. Donatien, an expert in the Chinese community in Paris, can best be described as the rock-star of Belleville. Picture a middle-aged French man strolling the streets of Belleville, hugging, high-fiving and kissing nearly every Chinese local he passes, all the while laughing and chatting in perfect Mandarin.

Donatien first came to know these prostitutes during his Wednesday night French classes, which many of these women opt to take in hopes of improving their lives here in Paris.

Chinese prostitution in Paris, began in the 90s. The majority of prostitutes come from the northern region of China, also known as ‘Dongbei’. While many Dongbei women hope to assimilate into the well-established Chinese community in Paris, they immediately face difficulties.   Most of the Chinese Parisians originate from the southern region ‘Wenzhou’; when these Dongbei women arrive in Paris —unfamiliar with neither the community nor the language—they struggle to find both work and companionship. Consequently, many turn to the streets for their living – and while they have received some media coverage, they are often portrayed as uneducated and of low social class in China. In reality though, the majority come from the middle-class and migrate to France with entrepreneurial ambitions.

The decision of the Dongbei women  to migrate is often not out of economic necessity, but rather to pursue opportunities abroad

While the Dongbei region has had its economic obstacles, this is not the principal cause of women’s immigration to France. As uncovered by Florence Levy, a French sociologist specializing in Northern Chinese immigration to France, most Dongbei prostitutes had good jobs back home.

“I had a car, a house, in my country—many people envied me.” says Chen, one of Levy’s interviewees.

The decision of the Dongbei women  to migrate is often not out of economic necessity, but rather to pursue opportunities abroad. The mere fact that they can afford to migrate— which costs roughly between 4000-10,000 Euros—suggests that they come from good economic standings.

Meanwhile, there are approximately 500-700 Chinese women working in Paris, primarily in Belleville. The Belleville neighborhood is is often the first place new Chinese immigrants go to find work. These Chinese women, who charge only 20-30 dollars, are the cheapest prostitutes one can find in Paris, followed by the West African and Romanian immigrants.

The famous Asian fetish is no fallacy, for clients often seek a geisha experience— and these women, desperate for money, will put up with nearly anything.

But for most of these women, they arrive in Paris having only ever slept with their husbands. Though some are still married to their husbands back home, many Chinese immigrants are divorced, which is often cited as a motive to leave China. Sexuality in Northern China is taboo and conservatism still prevails throughout many parts of the country. As a result, these women consequently arrive in Paris with little understanding of health risks associated with sex-work and know even less about proper protection.

The nongovernmental organization Medécins du Monde has developed a Lotus Bus, a bus of doctors that visit four neighborhoods across Paris to provide health services, condoms, legal guidance, and a hot cup of tea to these Chinese women. Lotus Bus was established in 2002 and is frequented by an estimated 450 to 550 Chinese prostitutes. Though they provide medical services, they cannot help these women move out of their predicaments.

“Do you want to go meet them?” Donatien asked me suddenly.

I responded tentatively, “Is it safe? What about the pimps?”

Donatien laughs  at  my confusion and says , “As if they have pimps, they only make 20-30 euros! No pimps would be interested—they wouldn’t make any money!”

“How do they protect themselves?” I asked.

“They share an apartment amongst other women, which helps them protect themselves if a client doesn’t want to pay I guess…but sadly they don’t really have any protection.”

We walked out of Aux Follies and down to the Belleville metro station, where many prostitutes stood soaked and cold in the rain.

The first women we interviewed was a 45-year-old prostitute named Meigui, who came to Paris two years ago.

Meigui arrived in Paris with no family, no visa and no French. She found people unkind and was surprised that no southern Chinese people would help her find work.

“They care about their families and their friends, not about strangers like me” she said.

The only people who took her in were prostitutes.

The devaluation of neighborhood buildings further aggravates the animosity towards these women.

“At first I didn’t want to” Meigui said, “but I need to eat, I need to live. So I did as the other women do, but I would rather not speak much about that. It’s already difficult. Even amongst us Jinu (妓女) [the Mandarin word for prostitutes] we do not speak about it unless there is a problem. I regret having come to France. Before I came I didn’t know—no one had told me—that life would be as difficult as it is here. In China, it was hard, but at least I had my family, my son, and my friends. Here I have nothing.”

While standing there in her short skirt and puffy yellow jacket, trying to stay warm on a rainy November day, a short stubby man with a bald head and torn up clothing walked up, made a gesture with his head to Meigui, and before I got a chance to ask my final questions, she was walking away to the closest street toilet.

The street toilets that are scattered around Paris are home to most of Chinese prostitution in Paris. Prostitution also takes place in the hallways of apartment buildings in Belleville.

“I call it the perpetual orgasm” a local Italian shop keeper jokes while describing the prostitution in his building. “I laugh about it” he adds “but fuck, I have no idea how I am ever going to sell this building anymore.”

The devaluation of neighborhood buildings further aggravates the animosity towards these women.

“My wife is Chinese,” Donatien mentions, “and when she will be grocery shopping or is walking around on the street, people sometimes confuse her for a prostitute.”

As the rift grows and tensions rise between Chinese prostitutes and the Chinese community, the likelihood of improved living conditions for these women—the possibility of employment and acceptance into the community—continues to diminish.

While Donatien and I were making our way back to the Belleville metro stop, we witnessed a young boy, no older than twelve, spit on three prostitutes and run away. Donatien angrily started yelling after the boy “N’as-tu pas honte?” which translates to “do you have no shame?” After checking to make sure the women were okay (and it’s worth mentioning he was the only one who did), Donatien turned to me and said “they’re just standing there, what are they doing wrong? Nothing.”