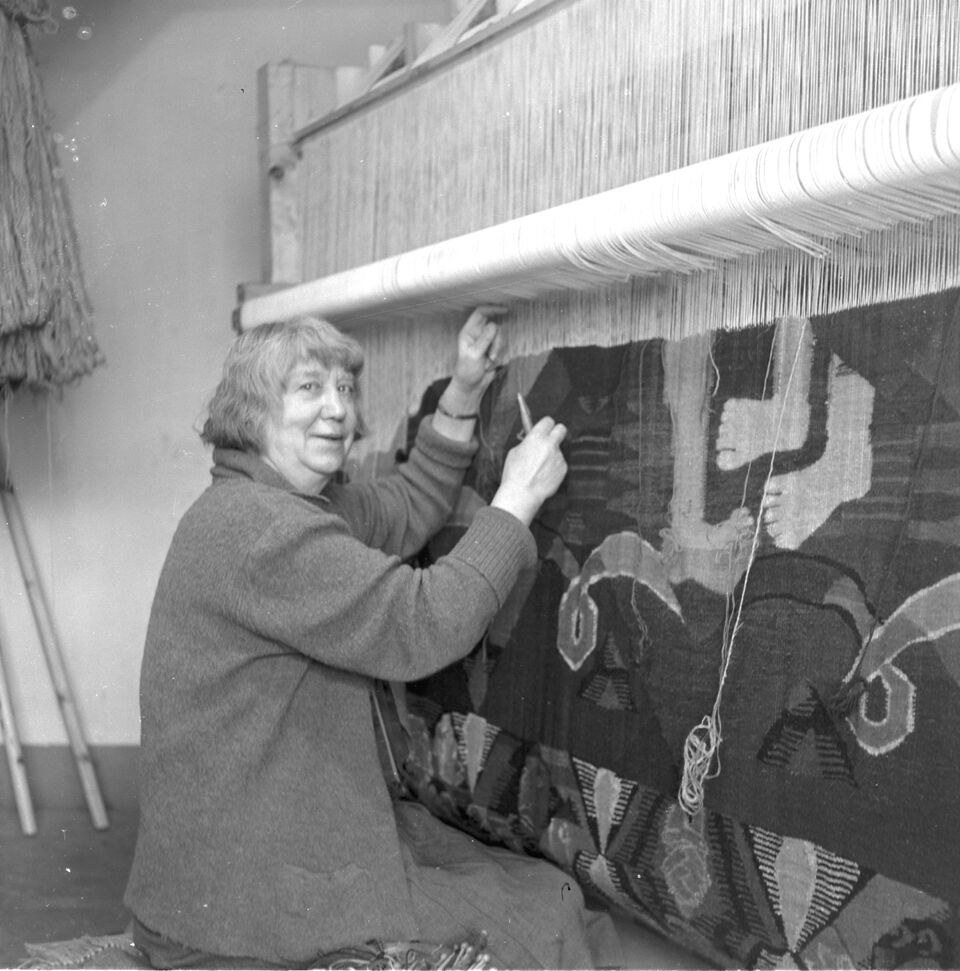 Woven Histories, Hannah Ryggen’s new exhibition at Modern Art Oxford, showcases impressive works from across the lifetime of the Swedish artist in this first major exhibition of her work in the UK. On display are an early painted self-portrait, which dates from 1914, a short video and timeline of Ryggen’s life, and 15 of her captivating tapestries for which, since the 1920s, she has been best known.

Born in Malmo in 1894, Ryggen began creating art as a hobby, attending painting classes alongside her career as a primary school teacher. Her exposure to expressionist artworks from Sweden, Denmark, Germany, Russia and Finland at the Baltic exhibition in Malmo, 1914 and a study visit to Dresden in 1922, prompted a shift in artistic focus away from the naturalist style of her classical art training. Experimenting with new techniques, Ryggen taught herself textile skills to create what became her characteristic woven tapestries.

In 1924, the artist moved with her husband to Ørlandet, Norway, where she lived on a farm with no running water and no electricity until 1944. Here, the natural landscape was incorporated into Ryggen’s tapestries as she carded fibres, spun wool and extracted colours from insects and plants to create natural dye. Both the artist and her husband, Hans, worked together to foster her talent: Hans Ryggen made a standing loom for his wife to work on.

‘Woven Histories’ provides a thrilling insight into Ryggen’s left-wing politics. Aligned with the feminist and anti-nuclear movements, she was also involved in the Norwegian Communist party for much of her life and subscribed to left-wing newspaper Dagbladet. Often refusing to sell her tapestries to private buyers, Ryggen clearly sought recognition for their value as public statements and agents of change.

Ryggen’s political stance was closely entangled with her personal experiences. Fishing in a Sea of Debt (1933) depicts the harsh social consequences of the 1930s economic depression. A banker sits, his fishing line bobbing along the surface of the sea which drags down a father and his drowning children; a doctor takes the last coin of a dead man who lies on the ground nearby. Unlike the starker distinctions between colour blocks in Ryggen’s subsequent tapestries, this early work preserves smoother transitions between shades, with muddy hues of dark orange and shadowy greyish blue figures haunting the landscape. This bleak impression of rural hardship was true to life – the family was often in debt, with Ryggen earning a mere 3000 Norwegian krone for her artworks across 1926-1940 (compared to the average Norwegian salary of around 2000 at the time).

Ryggen drew inspiration from the protest work of artists like Claude Cahun, who distributed anti-Nazi propaganda in Jersey during the occupation and was arrested by the Nazis for her subversive activities in 1944. Through Ethiopia (1935), Ryggen attacked the growing fascist movement in the wake of Mussolini’s invasion and annexation of the country in October 1935 and the inactivity of the League of Nations. The Italian King, Victor Emmanuel II, is positioned alongside Emperor Halle I of Ethiopia in a striking composition made up of geometric shapes and muted brown shades. In 1939, the tapestry was displayed at the New York World’s Fair, but with a cloth obscuring the area which showed a spear piercing Mussolini’s head.

Ryggen’s fearless defiance in the face of the Nazi occupation was such that she even hung this strangely beautiful and deeply rebellious work on the side of her house, in plain view of the soldiers who frequently passed by to reach nearby labour camps.

The 1939 Nazi occupation of Norway prompted a strong reaction from the artist: 1943 work 6 October 1942 crowds an ensemble of different characters in haptic reds and browns into this dynamic scene. The date makes reference to the new declaration of martial law in Norway. On the far right, the ghastly red faces of Hitler, Goebbels and Göring loom down from the clouds over Ryggen and her family who look out to sea from their small boat. A stern Winston Churchill with his characteristic bow tie and hat stares out on the viewer from the central panel, protected within a brick fortress which presumably guards the way to Britain.

On the far left lies a scene of actors from a production of Ibsen’s The Wild Duck, staged in Autumn 1942 and starring its director Henry Gleditsch. In the tapestry, Gleditsch is dressed as his character Doctor Relling, yet in reality the director was unable to perform: arrested just before the dress rehearsal, Gleditsch was shot dead alongside nine other dissidents in what the Nazi Reichskommissar for Norway, Josef Terboven, saw as an effort to eliminate “those who pull the strings.” The Wild Duck thereafter held symbolic resonance for Norwegian viewers, who refused to clap after each performance of that run. Instead, in an act of defiance against occupying forces and remembrance for the slaughtered men, the audience stood to observe a minute’s silence when the curtain went down. Behind the figures from Ibsen’s play, a deathly naked figure watches, his face and torso bloodied. This was the Serbian prisoner of war whom Ryggen encountered near her home, who had been tied up and tortured on a stake by soldiers. Finally, the tapestry shows Hitler floating above the scene, guns in his hands and oak branches – symbols which pervaded Nazi propaganda and uniforms – protruding from his behind. According to her friend, Ryggen’s fearless defiance in the face of the Nazi occupation was such that she even hung this strangely beautiful and deeply rebellious work on the side of her house, in plain view of the soldiers who frequently passed by to reach nearby labour camps.

Despite recognition in exhibitions worldwide during her lifetime, Ryggen has been marginalised on the international stage since her death in 1970. Repeatedly overlooked in the Norwegian and international artistic canon, Ryggen is justly restored to popular consciousness in this timely display of her tapestries. Ryggen’s enduring message of equality for all and her rage against abuses of power proves timeless, resonating with viewers of the exhibition today.

A play worth celebrating