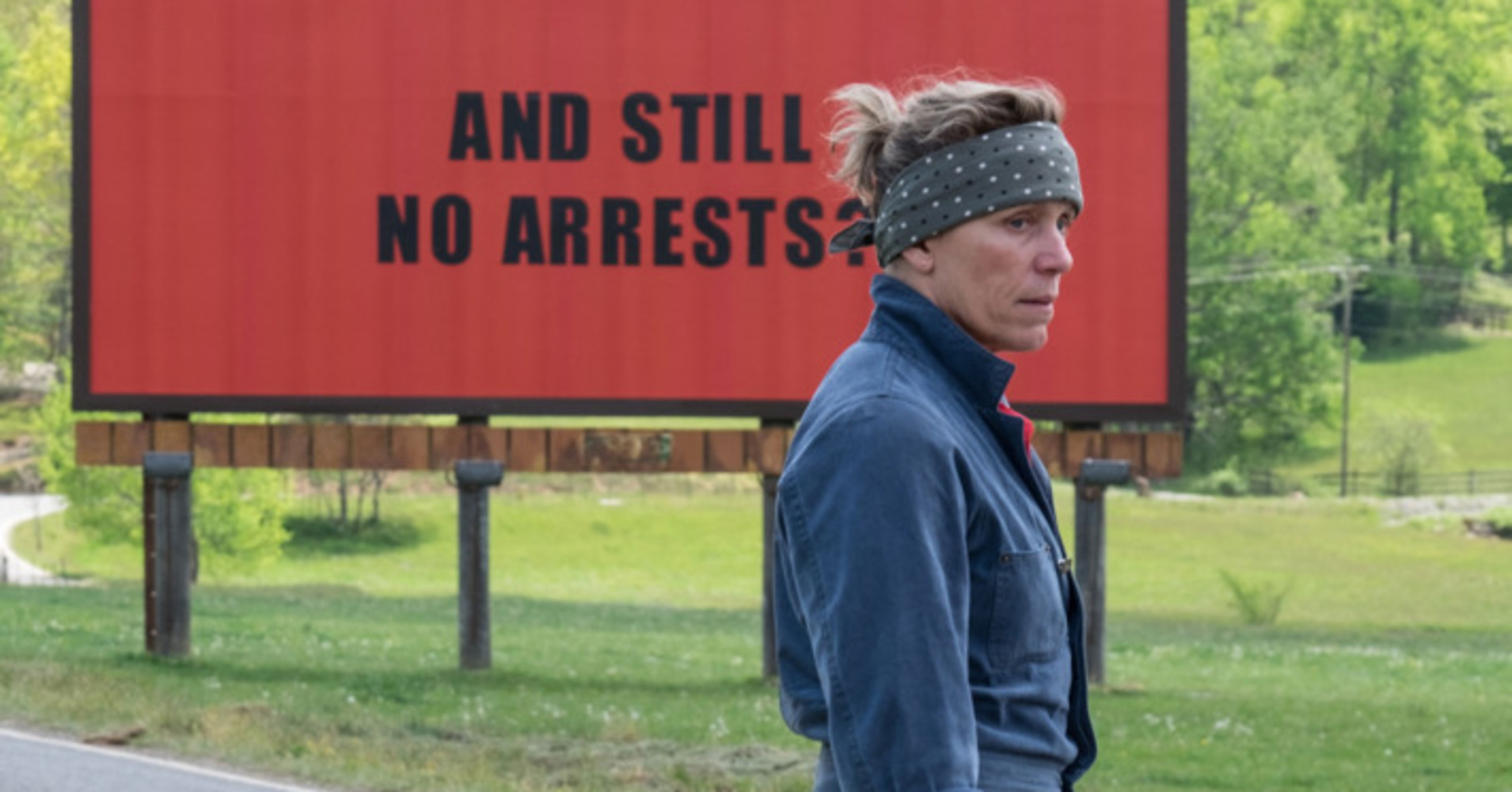 You’d be forgiven for mistaking Martin McDonagh’s latest work for a Coen brothers film. Many of the duo’s hallmarks are present, from the film’s dark tongue-in cheek humour and sharp moments of violence to the presence of the brilliantly blunt and snarky Frances McDormand.

There’s also a hint of Tarantino in his razor-sharp dialogue, but the film’s voice is unmistakably that of McDonagh himself. The director wastes no time in getting straight to the subject of his title, as the opening shots depict the currently undecorated boards adorning a stark yet elegant plane of grass, aided by another exceptional soundtrack from Carter Burwell. Just like the beautiful piano music that opens McDonagh’s previous masterpiece, In Bruges, the violin chords that introduce Three Billboards immediately engross the audience in a work that powerfully juxtaposes beauty and brutality. Cinematographer Ben Davis does a remarkable job of capturing minute scenic detail; just as we laughed watching Colin Farrell stare at a particularly strange breed of pooch siting near him on a bench, we now see a similarly strange, yet no less entrancing image of McDormand carefully placing a cockroach back on its feet. It’s these small, short details of atmospheric brilliance that highlight McDonagh as one of the finest directors working today.

This time, not a single word of prologue is needed to set out the ensuing plot, but the simple slow-motion image of McDormand’s Mildred Hayes marching into a building to hire out the eponymous billboards and protest against the police department’s complacency in finding her daughter’s killer. Indeed, not a lot of words are needed with an actress like McDormand, who can convey in one facial expression what might take a lesser talent an elongated soliloquy. Yet the film doesn’t want for elongated soliloquies, which are McDonagh’s trademark. The exchanges between policemen Dixon (Sam Rockwell) and his boss Willoughby (Woody Harrelson) as complaints arrive about Hayes’ billboards are a particular highlight, as well as Mildred’s colourful interactions with an unsuspecting priest and dentist. Rockwell emerges as a surprising comic force, having mostly stayed away from major commercial roles since David Jones’ Moon. Like In Bruges’ villainous Harry Waters, he manages to blend comedy and childlike anger perfectly within his vitriolic discourse.

Three Billboards’ recent triumph at the Golden Globes is justly deserved; McDonagh’s background as a playwright clearly shines through, with his witty and tight script earning Best Screenplay, alongside the coveted Best Picture award, while Rockwell deservedly won Best Supporting Actor. Yet it’s McDormand’s win for Best Actress that stands out above all the other accolades; the scene where she converses with a deer by one of the billboards is one of the standout moments of her career, laughing and grinning with jovial abandon before breaking down and sobbing with grief. Even if McDormand’s acceptance speech received some peculiar censorship from NBC, this didn’t stop her from slipping a cheeky s-bomb past the censors. After a year of political turmoil and uncertainty, it’s refreshing to watch a film like McDonagh’s that remains stoically bleak, and ultimately provides no easy answers for its flawed heroine or her aggressors. Sit back and enjoy the chaos.