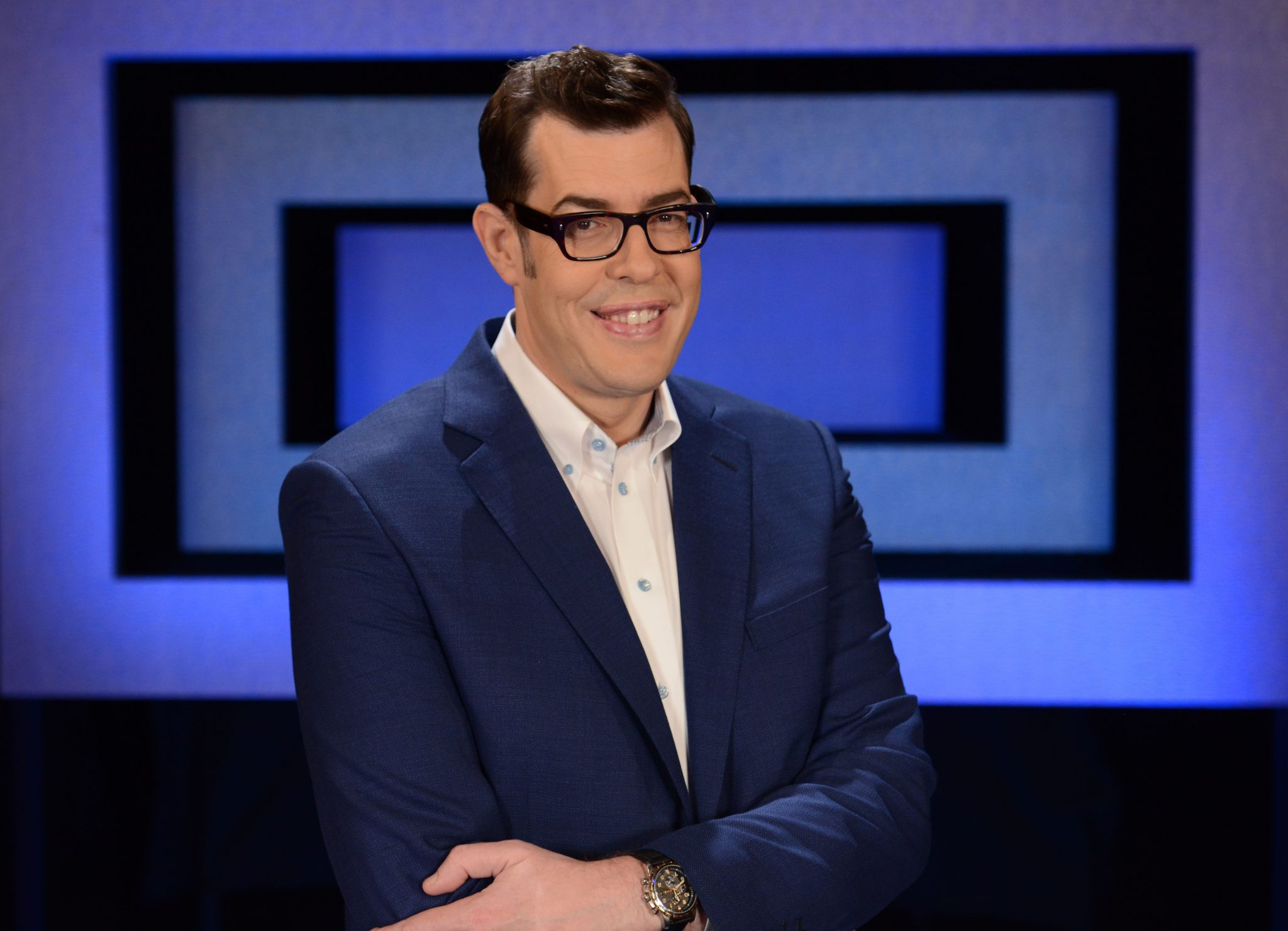 In a cavernous room beneath the Sheldonian Theatre, Richard Osman and I sit opposite each other beside a crate of Cadbury’s Dairy Milk, a fact which could easily have derailed the interview from the off if Richard wasn’t of the opinion that superior confectionary is in existence. Some groovy tinkling piano music is, quite inexplicably, playing overhead, and I am resisting the urge to sway in a vaguely distracting manner.

Richard Osman’s existence is largely Pointless, but he is also the presenter of Two Tribes, Channel 4’s Child Genius, and team leader on comedy panel show Insert Name Here. It came as quite a surprise, therefore, to learn that the adolescent Osman had “no real academic interest.” My first question, perhaps unfairly, was to ask Richard how well he recalls his university days. “Not brilliantly, I have to admit,” he replies. “When I was at uni, 25 years ago, I remember that exams weren’t quite such a big deal. I remember, essentially, just one long drunken evening for three years…”

Essex-born Richard Osman, a boy “not from a posh family at all”, expected to feel isolated when he arrived at Trinity College, Cambridge, but admits that the university changed his opinion on a lot of things. “I thought that it was going to be full of posh people,” he explains, “and I mean, there were more posh people there than I was used to, but actually, the posh people were really…nice. Oh, it was frustrating! There were so many people I met who I thought, I’ve never met anyone like you before…People like Xander, in fact!” Richard’s fellow Pointless presenter, Alexander Armstrong, also attended Trinity. “I would say to anybody, if you get the chance in twenty years’ time to work with someone you’re at college with now, then gosh, you’ll have the time of your life…” Was he tempted to provide the backing vocals on Armstrong’s new album, In A Winter Light? “You know what, I would love to,” Richard replies, smiling. “He’s going to do another one this year. I like to keep involved with it.” If he’s planning to add a resonant baritone to his colleague’s Christmas classics, he’s keeping this under his thinking-cap.

On the subject of music — and the overhead piano embarks on a convenient crescendo at this point — I ask Richard for his true opinion on the Pointless theme tune. This number, with its slurring up-and-down runs, flutey flourishes and blasts from the brass, is danced along to, generally with enthusiastic thrusts of a cooking implement, by millions of viewers every weekday evening. Surprisingly though, it isn’t depriving Richard of several hours of sleep on a regular basis. “I honestly could not hum it to you,” he admits. “I’ve heard it thousands of times, but it’s not in my head at all. That’s bad isn’t it?” It is, then, a pointless theme tune. I make this pun lamely to myself and am glad that I did not vocalise such a sub-par attempt at witty repartee. Instead, I ask Richard where the idea for Pointless came from. “We had a show years ago on Channel 4 called Beat The Nation where we asked every question to a hundred people and scored it.” he explains. This scoring system — an attempt to qualify how difficult or easy questions are — became the basis for a new show. “Someone came up with the name,” Richard tells me, “and as soon as we had that we thought That just really works. You start talking about going to Pointless meetings and having Pointless run-throughs.” I laugh heartily here, feeling my earlier attempt at humour vindicated.

Richard also presents Channel 4’s Child Genius, a show that tests the noggins of sproggins in a series of gruelling intellectual challenges. What would a young Richard Osman’s area of expertise have been if he were a contestant on the show? “Nothing really,” he replies instantly, “It’s an absolute fallacy that I’m clever. My memory is good, though.” What’s it like filming Child Genius? “It’s really, really intense,” Richard explains. “Every muscle is clenched throughout the entire thing because everybody wants every contestant to get every single question right. I’ve never been on a show like that before. It’s so stressful to make!” “People say ‘Is it cruel?’” Richard continues, “and I say ‘Well it’s no more cruel than a kid playing football at eleven and getting substituted.’” As someone who went to Cambridge, he tells me, he thinks it’s good for intellect to be tested. “I think failure is inevitable in life, and it’s a good thing to get out of the way early,” he explains.

I was keen to know how Richard felt, as a Cambridge graduate who attended a comprehensive school, about access to educational opportunities for state-educated children and those from poorer backgrounds. “Equality of opportunity is the most important thing, of course it is,” he states, with emphasis. “As much as I like posh people,” Richard continues, “When someone tells me ‘My child got three As and didn’t get in, and someone else from a state school who got three Bs did’, I think, Good, because I went to a state school and I can tell you that someone who got three Bs at a state school is brighter than your kid who got three As at a public school…You know, it’s very hard to go to some schools and not get three As, and that’s why I think Oxford and Cambridge do good outreach things.” He expands on this theme, observing that the home environment can make a huge difference to a child’s educational performance. “If parents are motivated, kids are motivated,” he explains.

“Equality of opportunity is the most important thing.”

We move on to the slightly less serious topic of biscuits. “Did you consider the Chocolate Digestive a worthy winner of…” I don’t even get to finish the sentence. “No!” Richard states emphatically. I have touched a nerve in mentioning his ‘Best British Biscuit’ Twitter poll, and sit slightly further back in my seat. “With a large following,” Richard explains, “everything regresses to the mean and you get Dairy Milk winning ‘Best Chocolate Bar’. I mean, come on everybody!” He looks around with despairing eyes, and I twitch slightly, conscious of the actual stack of Dairy Milk sitting, smugly, to his right. “Twitter to me is just psychology and statistics,” he continues, regaining composure, though the shoulder slump remains. “But I mean, no, of course the Chocolate Digestive is terrible! It’s…”, he falters, struggling to adequately express his anguish, “It’s deeply upsetting as a winner.” So what is Richard Osman’s slam-dunk of a biscuit, as it were? “Well now, this is the problem, because you said we were getting less serious,” he begins. “I have to say the Jaffa Cake, and that’s where I get in trouble. People get furious with me. It’s crazy. I’d rather mention Brexit on Twitter than Jaffa Cakes or biscuits…” (I wonder whether the unwitting ‘or’ here signifies some suppressed self-doubt, but don’t dare comment). “I can’t mention it because people are constantly like ‘Oh, but you know the EU…[classifies the Jaffa Cake as a cake]’, and I say, ‘Yeah, I do know that. I know…You don’t have to keep telling me that! However, it doesn’t mean they’re not a biscuit. They are. They’re in the biscuit aisle. They’re biscuits. They’re biscuit-shaped.’” (I am nodding my assent vigorously here, largely out of fear) “I know they’re called Jaffa Cakes, but you know, Bonnie Tyler is called Bonnie Tyler, but I wouldn’t use her to re-grout my bathroom.” “It’s been the bane of my life for the last three years,” Richard laments.

To avoid further undue distress, I change the topic, and ask Richard what advice he has for young people wanting to launch a career in the media industry. “Well the good news is that with media, if you’re good and you can get your foot in the door, there’s a very quick career progression. We do intern schemes at Endemol, which is my company, and we ask people to send in ideas. Anyone who has good ideas we’ll take them and encourage them, because we’ll make money from them, and they’ll make money from us…So I would say, knock on doors, knock down doors. If you’re good, then you’ll make a fortune.”

“Well the good news is that with media, if you’re good and you can get your foot in the door, there’s a very quick career progression.”

What was the most important thing that university taught Richard Osman? “Oh goodness,” he replies, “Well I didn’t learn anything at university academically I don’t think.” He pauses, then continues, “It taught me that there’s no one out there who’s better than you, that there’s no one out there who has a divine right to be something before you get to be that thing…and you have to see that, you can’t be told it. So that really, and just that there isn’t a strata of society where I can’t hold my own, and I think that’s true for everybody.”