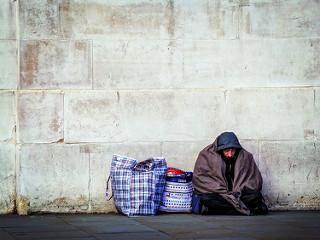 Oxford City Council voted unanimously on Monday in favour of amendments to the city’s Housing and Homelessness Strategy, and to adopt a target of zero rough sleeping in Oxford.

In a debate over the amendments to the Housing and Homelessness strategy, councillor Mike Rowley, board member for housing, rebuffed claims from Green Party councillor David Thomas that rough sleepers had been turned away during the winter from the council’s Severe Weather shelters.

On Your Doorstep, the student union’s homelessness campaign, has recently targeted the city council’s provision of SWEP (Severe Weather Emergency Protocol) with an online petition demanding that shelters open every night the temperature drops below freezing, rather than only after a period of three consecutive nights.

Oxford City Council have responded twice to the petition signed by over 36,000 people, the second of which took issue with the petition’s use of the example of Vikki Cope, who died after spending a night in wintry temperatures in November.

The meeting also discussed the council’s controversial Community Protection Notices, which have been used in the past to move rough sleepers on from buildings and threaten them with a fine of up to £2,500, as well as the council’s dumping of rough sleepers’ possessions.

To a question regarding the possible provision of day-time storage of rough sleepers’ possessions, councillor Rowley reaffirmed the council’s position not to provide storage, as it supports “continuation of a life on the street which is detrimental to those concerned.”

In the motion, the council agreed to “formally reaffirm its target of zero rough sleeping on the streets of Oxford” with a view to further defining this target and developing a timescale and action plan in light of the newly amended Housing and Homelessness strategy.

Policing rough sleepers has been criticized by a further petition, started by members of On Your Doorstep, aiming to repeal the 1824 Vagrancy Act, which is still used to criminalise rough sleeping. The petition has reached over 10,000 signatures and is currently awaiting government response.

Chair of On Your Doorstep, Alex Kumar, told OxStu: “I hope that, following the passing of this motion, the city council will be prepared to take bold new steps such as following Sadiq Khan in London in expanding SWEP and opening the emergency shelters to rough sleepers on every freezing night.”

Balliol raves about new Drummond Base