We chatted to Lucy Hayes, the director of Hedda at the Oxford Playhouse, about her thoughts and feelings on the production:

Could you tell us a bit about the plot of Hedda?

The play is about a woman who returns home from her honeymoon to this banal domestic existence that she doesn’t want, but she can’t find a way out of. Over the course of 36 hours, she is visited by various people from her past who bring all kinds of tensions and secrets. The action escalates from these very naturalist beginnings to a tragic ending which almost reaches the scale and symbolism of Greek tragedy.

Why do you think Hedda is relevant for 2018? How does it feel putting on a feminist production in the age of women’s suffrage?

Questioning the place of women in society is always going to be relevant, and it’s especially important to ask this in the centenary of female suffrage. The famous suffragette Elizabeth Robins was the first woman to play an English-speaking Hedda in the UK and US, so the two have always fitted together. Even though the place of women has clearly changed since 1891 (when the production was first staged), choosing a modern adaptation of the play, and staging the play in such a key year, forces us to ask ourselves to what extent expectations for women to behave in a certain way still remain. Hedda is frequently told how a baby would make her happy: ‘you’ll love it. All women do’. However, Ibsen was always very direct in denying that Hedda did tackle ‘female’ issues. He preferred to see it as a ‘human’ play. This is why, despite the play’s domestic setting, it tackles big, existential themes like fate, desire, love, and power. Such themes are always going to be relevant.

Why did you decide to stage it in Oxford?

The interesting thing about Kirkwood’s adaptation is that the oldest character, George’s Aunt Julie, becomes his sister and is made younger. The character of Julie in the original is this elderly spinster figure, who cares for her sister and whose fussing Hedda hates. By making her younger, when she carries these same characteristics there’s a sense to which she has both accepted and is playing up to this older role. She has a very fixed idea of her future and has decided to live that out even though she doesn’t need to, and I think that’s fascinating. So that’s why I decided to stage the play in Oxford. All of the characters to some extent have fixed an idea of the future of themselves, even though they are all under 30. They all struggle, to some extent, with the question of value: how do we fill our lives with meaning? What do we deem to be worthwhile? These questions are universally applicable, but perhaps more so to a predominately student audience who, post-graduation, will be facing these questions more directly.

Also the final thing that sold the play to me was that Kirkwood’s adaptation relocates the social background of Hedda from Norwegian aristocracy to Oxford academia, so there are all sorts of references to Oxford that pepper the play. Such detail I’m sure will be amusing to an Oxford audience , but it also raises interesting questions about the overlap between the university’s structures and Victorian bourgeoise ones…

What have been the challenges and rewards of staging Hedda so far?

Each of the characters in Hedda are so psychologically detailed that we’ve had to do a lot of background research to compile their biographies and flesh them out fully, which has meant we had to do a lot of work before we even started on the text. It means we sometimes agonise about deciding the chronology of an event which happened 7 years before the play and is only mentioned in a passing reference in the text. Although that has been the biggest challenge, it’s also very rewarding, as its enabled us to create such intricate dynamics between the characters. It’s also really crucial. Even though you only see the characters over the course of 36 hours, their secrets, habits, tensions and traits have built up over their entire lives, and that’s what makes the play so fascinating to watch. And so you can’t cheat.

You have Lucy Kirkwood coming to give a speech the day before the first performance – could you tell us a bit about that?

We are very excited that Lucy Kirkwood is going to be doing a pre-show talk before our Friday performance at 5pm. She will be in conversation with Ibsen world-expert, Kristen Shephard-Barr, about her update of the play, Ibsen and adaptation in general and her work since Hedda. Hedda was actually written by Kirkwood very early on in her career (nearly 10 years ago), and since then she’s had such major success with Chimerica, Mosquitos, and was recently listed as the only female playwright on The Stage’s 100 most influential people in British Theatre. I think it will be fascinating to hear her reflect on Hedda considering what she’s gone on to do since.

What makes this play so special- why should we buy tickets?

Firstly, it’s one of the greatest plays in history! But in terms of the production, I really feel like every element of it is going to (hopefully!) shine; I’ve been absolutely blown away by the talent and passion of every single member of our cast and creative team. From building these detailed character biographies, to creating a lighting design based around the effect of different poetic feet, to testing how to wilt flowers in real time onstage, we’ve thought so carefully about every single element of the play because we really want to do both the play, and the Playhouse justice. We’ve been very ambitious, but I hope this pays off in a great show!

And, spoiler- there is a big surprise at the end of the play! What more do I need to say? And if you do come and see it, please keep quiet and don’t ruin the surprise for anyone else!

When does the student discount end?

You’ve got until Sunday of 5th week (18th Feb) to get student discount tickets. But you’ve got even less time than that to get those all important centre seats…

On The Road and raring to go, but are literary adaptions a move in the wrong direction? 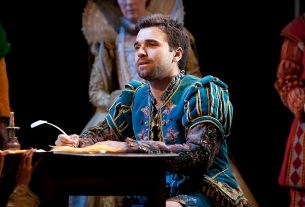 Shakespeare in Love and skinny jeans