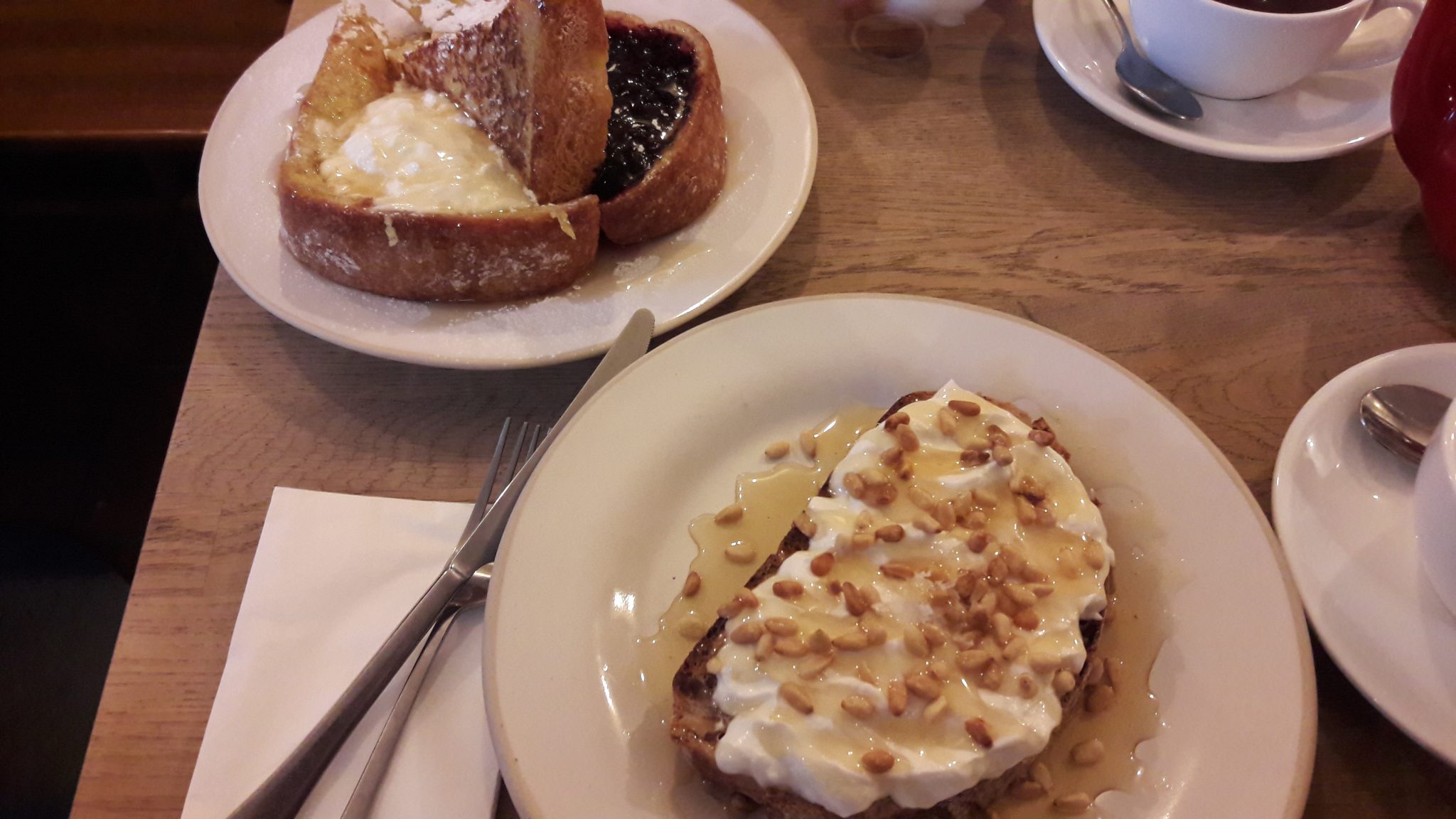 Just down Little Clarendon Street, set back slightly from the road in a fairly ugly concrete building, GAIL’s offers a glowing array of breads, pastries, quiches, tarts, and all manner of baked delicacies. Walking in from the rain on a cold, rainy February afternoon in the hope of getting a good lunch, we weren’t quite sure what to get from the menu itself. It was obvious from the display that the choice of baked goods was varied and, some would say, all-encompassing, and so expectations for our meal were high.

The contrast between the bleakness of the street and the brightly-lit restaurant is strong. On walking in, you are hit with the smells of all the loaves of sourdough stacked up by the window, and all the chocolate cakes and cinnamon buns lined up on the counter, which is an appreciated change from the dismal weather outside. And the staff were welcoming too; they greeted us in a friendly way and showed us where we could choose to sit.

On walking in, you are hit with the smells of all the loaves of sourdough stacked up by the window

The lunch menu turned out to be more of an all-day breakfast situation, which was fine by us! Lots of the options involved toast: scrambled eggs on French dark sourdough toast, and smashed avocado, seeds and tomato relish on seeded sourdough toast seemed like fancier alternatives to standard breakfast combinations, to name a few. There’s also a section of the menu called ‘Bowls’, which has things like Greek yoghurt with seasonal fruit compote, as well as some things that I’d never considered eating before like overnight oats with toasted buckwheat, apple and almond butter. GAIL’s also offers pancakes and a lot of bacon. To be honest, it all looked good, and we would have happily ordered any of it.

In the end we went for some toast-based items. The first dish we chose was Windrush Valley goat’s curd, toasted pine nuts and honey, on honey, almond and walnut sourdough toast, which you can get for just £5. I don’t know where Windrush Valley is, but their goat’s curd really is delicious. Paired with the honey, we expected this to be a potentially strange combination of flavours, which it may well be; but it’s a combination that works. The pine nuts added another dimension to the meal, making it not only creamy and sweet, but also distinctly nutty.

The other item we chose was brioche French toast with fruit compote and créme fraiche, which you can get for £7. You can also get this with maple bacon, as a slightly more savoury alternative (although it’s probably still very sweet). It was this dish that defeated us in the end, with its heaps of condiments piled on three pieces of French toast. The portion was huge, and although we couldn’t finish it off, it was thoroughly enjoyed.

GAIL’s also advertise their coffee strongly, with their own blends on offer if you need a pick-me-up in the morning

Although we enjoyed the food that we chose, it was still undeniably full of sugar; we loved it, but if you don’t have a sweet tooth, then perhaps the bacon and egg or soup options would suit you more. As we finished our meal, we spotted someone at the next table being served with the soup of the day – whatever the flavour was, the bowl was big and came with three pieces of bread, offering yet another satisfying lunch option. There’s also a sweet potato and cauliflower cake which gets its own box on the menu, topped with aioli, pickled cucumber and beetroot, which sounds intriguing enough to try.

GAIL’s also offers many types of tea. When I was ordering I asked what they would recommend, and they suggested the rosebud tea; I’d never tried it before, but thought I’d give it a go. Again, I wasn’t disappointed – when you lift the lid of the teapot there’s a little cluster of rosebuds, which infuse the tea with a flavour not dissimilar to Turkish delight. Teas such as jasmine, earl grey, and lemon and ginger were also on offer, as well as a wide range of other options. GAIL’s also advertise their coffee strongly, with their own blends on offer if you need a pick-me-up in the morning.

All in all, I would be quick to recommend GAIL’s to anyone looking for an interesting and luxurious breakfast or lunch. While the prices may be a little steep for a student to enjoy on the regular, the food on offer here is undoubtedly worth indulging in every now and then, whether as a reward for handing in an essay, or simply an after-work treat.