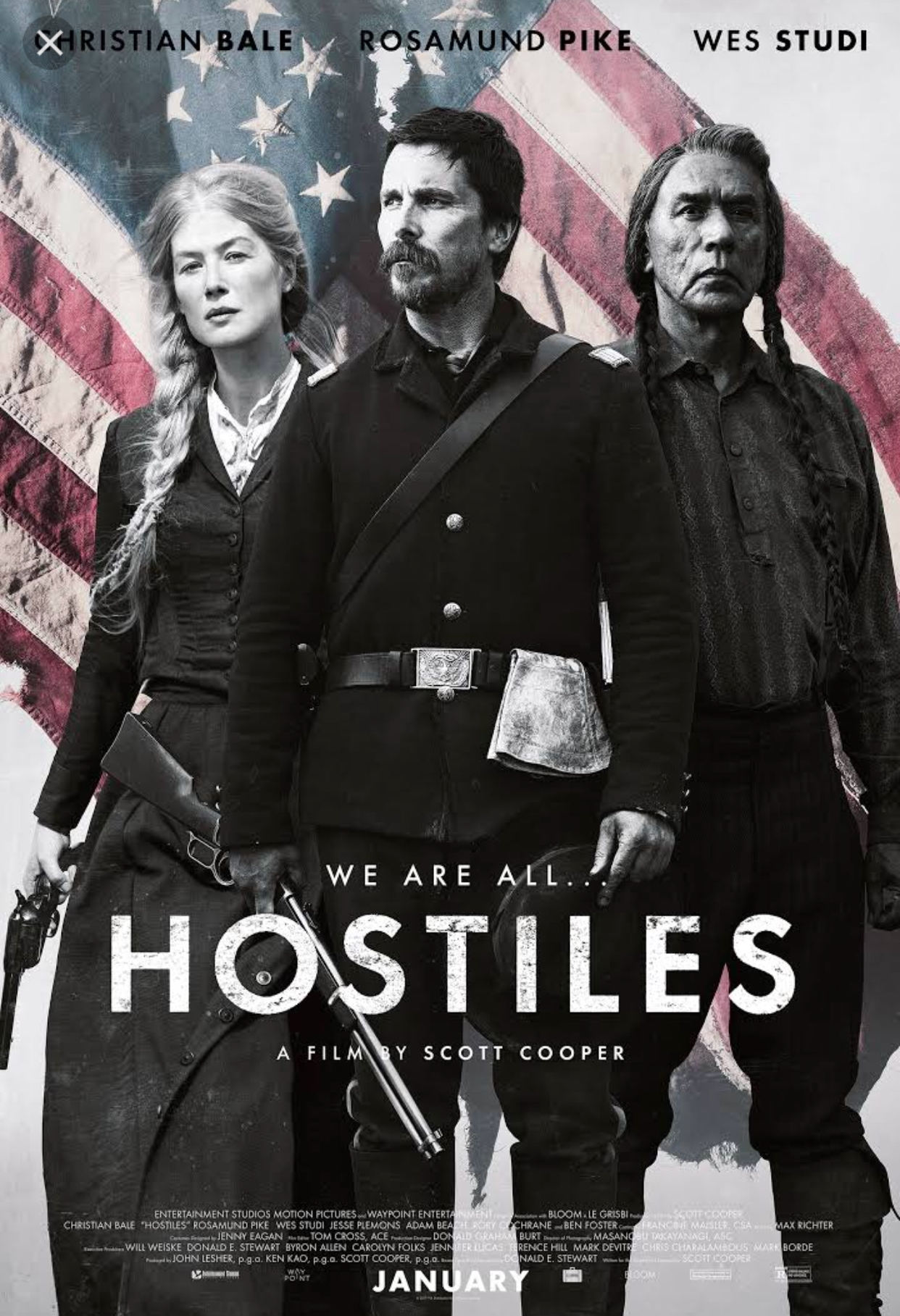 Hostiles, director Scott Cooper’s fourth film, starts brutally and continues in that vein. It begins as the camera advances towards a simple wooden house and the pioneers within break off their daily proceedings as a band of Comanche warriors is revealed. A husband desperately tries to pick them off with his rifle until he is shot, scalped and then dispatched with an arrow. His three small children are then ridden down by the whooping raiders. Only his wife, Rosalie, played by Rosamund Pike, escapes, clutching the bloody mess of her dead infant. Crossing paths with the grizzled Captain Blocker, portrayed by Christian Bale, she proceeds to accompany him on his mission to bring a native chief Yellow Hawk from New Mexico to Montana, travelling north with the Cheyenne’s family and Blocker’s own contingent of soldiers. The film’s violence never relents and it is this unflinching gaze that is Hostiles’ greatest strength. Deliberately upsetting, it displays the savagery of both the colonisers and the cruelty wreaked upon them in full force. Yet it is often a film of remarkable beauty — inside tents lit by flickering lamps, the sallow cheeks and sunken eyes of its characters are thrown into almost Caravaggesque contrast, while the terrain shifts from scrub to forest to mountain, as the great American wilderness envelops the screen and the riders who cross it.

Hostiles is however also a deeply flawed, rather slippery film. The proceedings seem to take place largely in a historical and moral vacuum; there is little sense of the vicious legacy of colonisation in it, and Blocker and Yellow Hawk both seem to become sympathetic characters trapped in a violent world. It’s hard, however, to get over the fact that both are murderers of the most brutal kind, having slaughtered, as we learn, literally countless innocents. While the film does not totally forget this, it ends up obscured in arcs of redemption that focus awkwardly on the men who perhaps least deserve it. While Pike gives probably the strongest performance, she remains a slightly unsettling character, her grief being rendered a tortuous spectacle of suffering that seems to border somewhere between exploitative and unbelievable. The Native American characters meanwhile rarely stray beyond slightly caricatured stoics, stony-faced and only capable of the occasional gnomic remark. An almost maudlin epilogue only succeeds in reducing the impact of a far stronger previous denouement. It’s hard not to feel there were missed opportunities within the film – not only could Hostiles have done with some acknowledgment of its context, but it also hints at themes it never quite manages to pin down. At one point, Corporal Woodson, a black soldier and old friend of Blocker, is told to put Yellow Hawk in manacles. The image of one subjugated race compelled into chaining up another is a powerful one. Yet it is never taken further; what the relations between the two might have been and the contrast between the treatment of black and Native American peoples, remain unexplored.

The proceedings seem to take place largely in a historical and moral vacuum.

When watching Hostiles, it’s difficult not to think back to the countless other depictions of the American West. The similarities to the novels of Cormac McCarthy are particularly striking, with the gritty and relentless evocation of violence and landscape in both. The audience is even confronted before the first scene with a D. H. Lawrence quotation: ‘The essential American soul is hard, isolate, stoic, and a killer. It has never yet melted.’ The problem with Hostiles is that it never finds space to develop a deeper poetic quality present in other examples of the genre. The title itself is supposed to refer to the basic tenet of its world: that everyone is a combatant and that their war never ceases. In that, however, lies the issue. While striking in its brutality and beauty, it is a film dragged back by its own uncomfortable equivalencies and a period ripe with complexity starts to seem oddly flat. Moral implications are instead drowned out by yet more screams and gunfire. The strength of its simple narrative, the awe of the setting, and the forceful depiction of savagery together merit a watch. Don’t be surprised, however, if you leave wanting something a little more.

The problem with Hostiles is that it never finds space to develop a deeper poetic quality present in other examples of the genre.