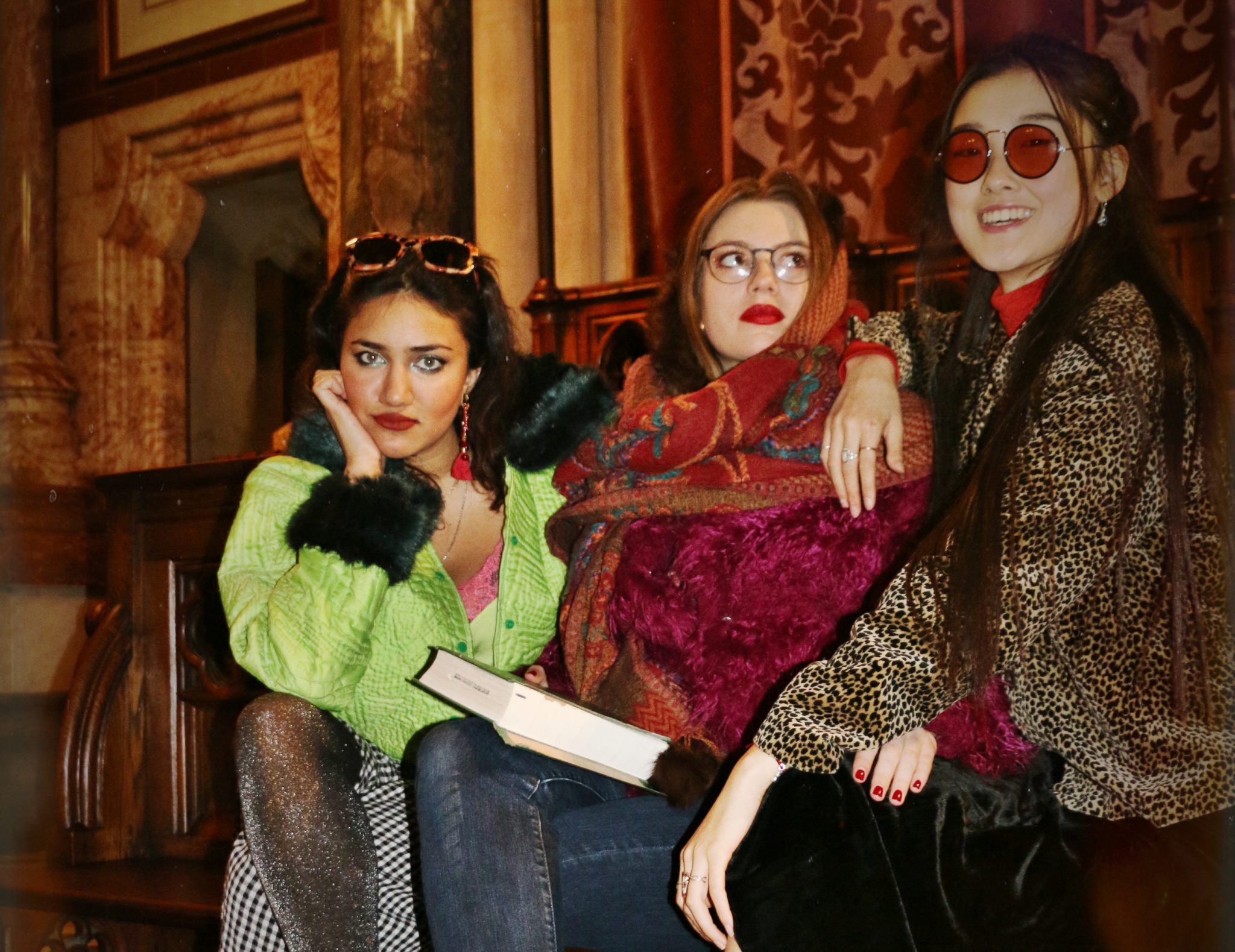 Sitting in a hotel lobby in New York, an old engine of a woman steamed into the room, a cloud of flashing cameras in her wake. She sat down in a dark corner, the reporters followed and the dust settled. Two red ocular moons and a tuft of silver hair illuminated the gloom. She was wearing more bric-a-brac on her tiny frame than I would have ever have thought possible. The stereotypical crazy old New York lady had reached a new level.

“Oh my gaahd, it’s Iris. She’s tooooowdally nuts” my own old-school New Yorker relatives squawked at me. “She’s a loony tune and a half”. That was it — no more to be said on the matter.

But there was a lot more to be said on the matter. Thereafter my visit was consumed by some intense googling; an internet rabbit hole that led me to the looking glass, making me re-evaluate why I was getting dressed and who I was dressing for. Crucially, Iris gave me a whole new language for talking about clothes.

Iris is Iris Apfel and is from Astoria, Queens. Iris studied art history at New York University. Iris got a job as an interior designer. Iris hated all of the textiles she encountered. Iris set up on her own. Iris took trips to European flea markets and the bazaars and souks of North Africa, sourcing furniture and vintage and antique fabrics.

She looked around her and saw “over-priced junk”. Iris set up Old World Weavers to replicate the historic fabrics she found on her travels, finding the specialist looms and weavers needed to recreate them wherever in the world they were. Iris was then put charge of design in the White House for no fewer than nine presidents: Truman, Eisenhower, Kennedy, Johnson, Nixon, Ford, Carter, Reagan, and Clinton.

Iris had also been compiling the best collection of vintage and designer accessories and clothes that the world has ever seen. Her wardrobe was talked about across New York. Harold Koda, a curator at the Metropolitan Museum of Art’s Costume Institute asked her if he could do an exhibit at the museum ‘Selections from the Iris Apfel Collection’.

But there was more to Iris than her clothes. In this article I will list my favourite Iris quotes and explain how her astute observations have altered my thinking on both my social and material life.

“Throughout history, clothes have been a great vehicle for explaining who you are. What you wear and how it was made reflect your status in society. People can read your clothes like a book: in the past by, for example, their colour and how they were embroidered.”

This quote is important because of the issues surrounding the discourse around an interest in fashion . Whilst it is growing more acceptable for men to have an interest in fashion, such an interest does still lead to teasing about effeminacy and characterisation as a homosexual. This is all part of a wider issue to do with the de-intellectualising of fashion and its dismissal as frivolous. And the reason people feel free to dismiss fashion with a “what’s the point?” attitude in a way that no one ever would about sport, cars or gadgets, is because fashion is aimed at women. Fashion and clothes have been the domain of women since their invention. The lineage of the clothing industry, stretches far back into the past and can be seen than the plan of the ancient greek Oikos (domestic house), with a designated loom working room for women and slaves only. As Hadley Freeman, a brilliant journalist on this issue describes, fashion is characterised as being about “silly little ladies and their lady things! Not important, like kicking a ball, you see”.

But Iris — it’s not cool to be interested! What about looking too keen? Or worse — people might think I am ‘extra’!

Today, there is an awful association between being cool and being uninterested. Where did this mentality originate? Perhaps it’s a Darcy-esque snobbery, which trickled down the ranks of the powerful elite, infected their young and spread like a plague into our generation. Etymology is important when females are seen as a bit too ‘keen’ or ‘extra’ for some people’s liking. The word used to describe Iris when she walked into the lobby was “loony”. Coming from lunacy – loony describes a monthly periodic insanity, believed to be triggered by the moon’s cycle (you get the picture — tampons are involved). Here’s another word — hysterical, which comes from the Latin hystericus (“of the womb”). This was a condition thought to be exclusive to women – sending them uncontrollably and neurotically insane owing to a dysfunction of the uterus (the removal of which is still called a hysterectomy). These etymologies have cemented a polarisation of the female and male mental states. Men being associated with rationality, straightforwardness and logic; women with unpredictable emotions, outbursts and madness.

Femaleness is emphasised along with these notions of dominance and submission, and this hugely influences fashion industry, where adverts can be seen to sketch out what is possible and desirable. Iris has come to be a central figure herself in an industry to which she seems to have no place for her. She is old, she’s not sexy and she’s not trying to be —“everybody knows that if you’re an older women you’re going you’re look like a horse’s ass in a strappy dress”.

This, for 14-year old me, was probably the most earth shattering, radical thing anyone could have said about getting dressed. If I made any effort in this regard it was because I wanted to keep up appearances with all the blonde Kensingtonites in my all-girls’ school. Or because I was going to a disco where boys(!) would be. This would mean getting an American apparel velvet body con dress and stuffing a training bra with enough cotton wool to fill a duvet. As I got older, I was aware of how men looked at me in the street and how that changed according to my attire. The goal was to dress in a way that made me pretty enough to hold a stare but conservative enough to avoid a cat call. But what I needed to do was to learn to dress for a single audience: me.

“Being an individual takes effort. Most people are pretty lazy. You don’t find out who you are unless you work at it.”

Iris is a rare gem in the fashion world — she’s not a loony. She’s a female role who is not celebrated for aesthetic beauty, for sexuality, for her body. She is not used to push brands, to sell products, to look good. She’s celebrated as an individual. Not as a clothes rack. As an angsty young tween trying to come to terms with my own taste in clothes and concepts individuality, there was no one better for me to have encountered her in that New York hotel lobby. I feel very lucky she marched into my sphere of consciousness that evening, and made such an impact. Endeavouring to view the act of getting dresses through the outlook of Iris’s gigantic owlish glasses is something I really believe more people, but most especially women, should endeavour to do. 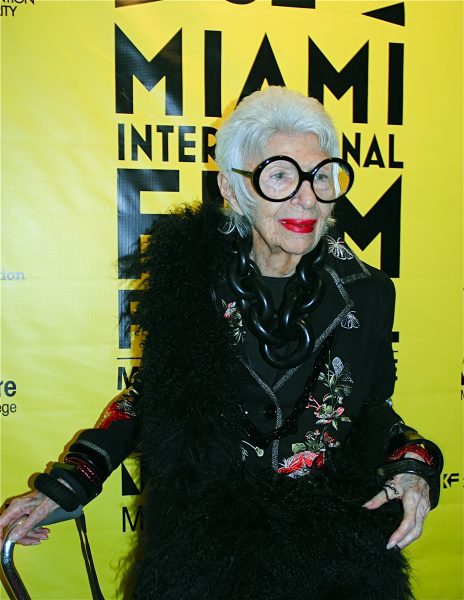