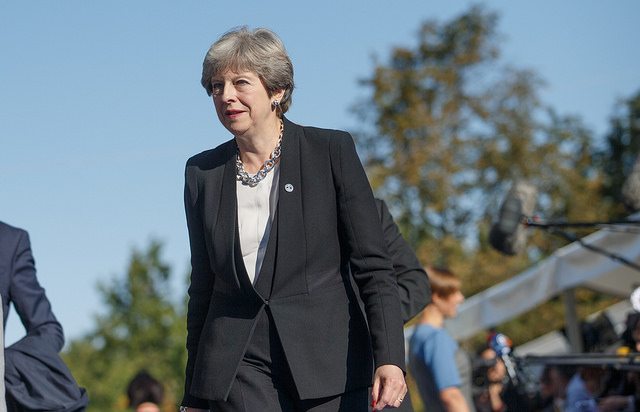 Theresa May is in crisis, but she isn’t finished yet

Another week, another backbench revolt which threatens to topple Theresa May’s precarious minority government. At this point, it’s all a little stale; a month doesn’t go by without some kind of crisis befalling the current government, with Brexiteers in revolt over anything from the most minute policy differences to fundamental philosophical disagreements (this time sees Bernard Jenkin threatening defections if the PM does not commit to a disastrous exit from the single market). At the same time, the most ardent members of the Conservative-Remainer vanguard (led, of course, by Anna Soubry) are increasingly vocal in their own threats to abandon the government, should it suit their interests. It is hard to think of a more embattled Prime Minister in living memory – even Gordon Brown’s position was under less threat.

And yet, it seems clear Theresa May won’t be going anywhere soon. This might seem to be a strange thing to say having listed of all the threats facing her, but Theresa May’s own instability is balanced out, to her advantage, by the ever-growing crisis of leadership in her party. Though May is weak and embattled, she is propped up by the fact that the Conservatives simply cannot find someone else to do her job. This is a party bereft of leadership: the old Cameroons (Cameron himself, George Osborne, and their allies) are marginalised at best or have left Parliament altogether; “moderates” have turned to Amber Rudd, a woman who may not even keep her seat at the next election; and the Brexiteers bounce between Boris, David Davis (who for his part claims he plans on retiring by 2019), Liam Fox, and even the horrendously unpopular 2016 leadership election loser Michael Gove. Signs of this were, perhaps, evident as early as the 2016 leadership election, in which May was able to “climb the greasy poll” to the premiership not because she was anybody’s dream Prime Minister, but because the vast majority of Tories had nowhere else to turn. The 2016 field did not lack candidates, crowded with unknowns like Andrea Leadsom and Stephen Crabb, but it lacked anyone who could inspire the party faithful. That even the extremist and comically outmoded Jacob Rees-Mogg was being touted as a future leader over the summer is proof that this is a party which has no idea where to turn, and no idea whether to embrace moderation or turn to radical Euroscepticism and the worst excesses of the new right-wing movements growing in Europe and America.

This uncertainty over the party’s future lies at the heart of the conflict keeping Theresa May in place. It is not one which is publicly debated (Tory politicians do ideological conformity better than anyone else), but the Conservative Party seems stuck in a crisis over the direction of its future. From 2005 to 2016, the party was firmly in the hands of David Cameron’s allies. Effortlessly liberal and cosmopolitan, elite yet understanding and appealing to the centre ground, they had created a new kind of Conservatism which sold a budget slashing Thatcherite ideology as a cosy cousin of Blairite centrism. Then, in 2016, Brexit toppled David Cameron, and May and her party have struggled to work out what to do ever since. Starting from June 2016, Theresa May dabbled in a new “Red Toryism” for a year – but since Nick Timothy, Fiona Hill, and May herself led the party to a shambolic pseudo “victory” last year, her “socially responsible” Conservatism has been on the wane, and May’s radical reformist streak now seems a thing of the distant political past. Gone is the talk of building a society which “works for everyone” and so gone is the ideological basis for May’s rule, but there is nothing to supplant it, and no clear pretender to the leadership. Should the party return to Cameronism? Should it embrace the alt-right? For their part, its ill-judged new “youth movement” and “Tory Momentum”, Activate, certainly seemed desperate to do so in its calls to “gas chavs” last year. Or is there something else which will enchant a new generation of Conservative voters? For now, at least, no one in the party has answers to any of these questions.

Until such questions are answered, the party will be left in a state of flux, and Theresa May will be able to remain as leader. It is only through such division that she is able to stay on top. She is being outpaced in the polls by Jeremy Corbyn, and according to recent polling by ICM, the Brexit process, the only plank left in a collapsed policy platform, is more unpopular than ever. This kind of crisis should kill a premiership; but for now, it won’t. Theresa May will continue to stumble from crisis to crisis, unable to achieve anything significant. Every faction seems opposed to her aside from a dwindling clique around the party leadership, even if few are willing to voice their opposition outright to May herself (as opposed to criticising certain policies they dislike). May is not Thatcher in 1990 – there is no Michael Heseltine waiting in the wings, sowing dissent on the backbenches and poising to strike at the first sign of weakness. However, May should look out for one. The second they see an heir able to drag them kicking and screaming into their post-Brexit future, the Conservatives will leap upon May and relish in her destruction.