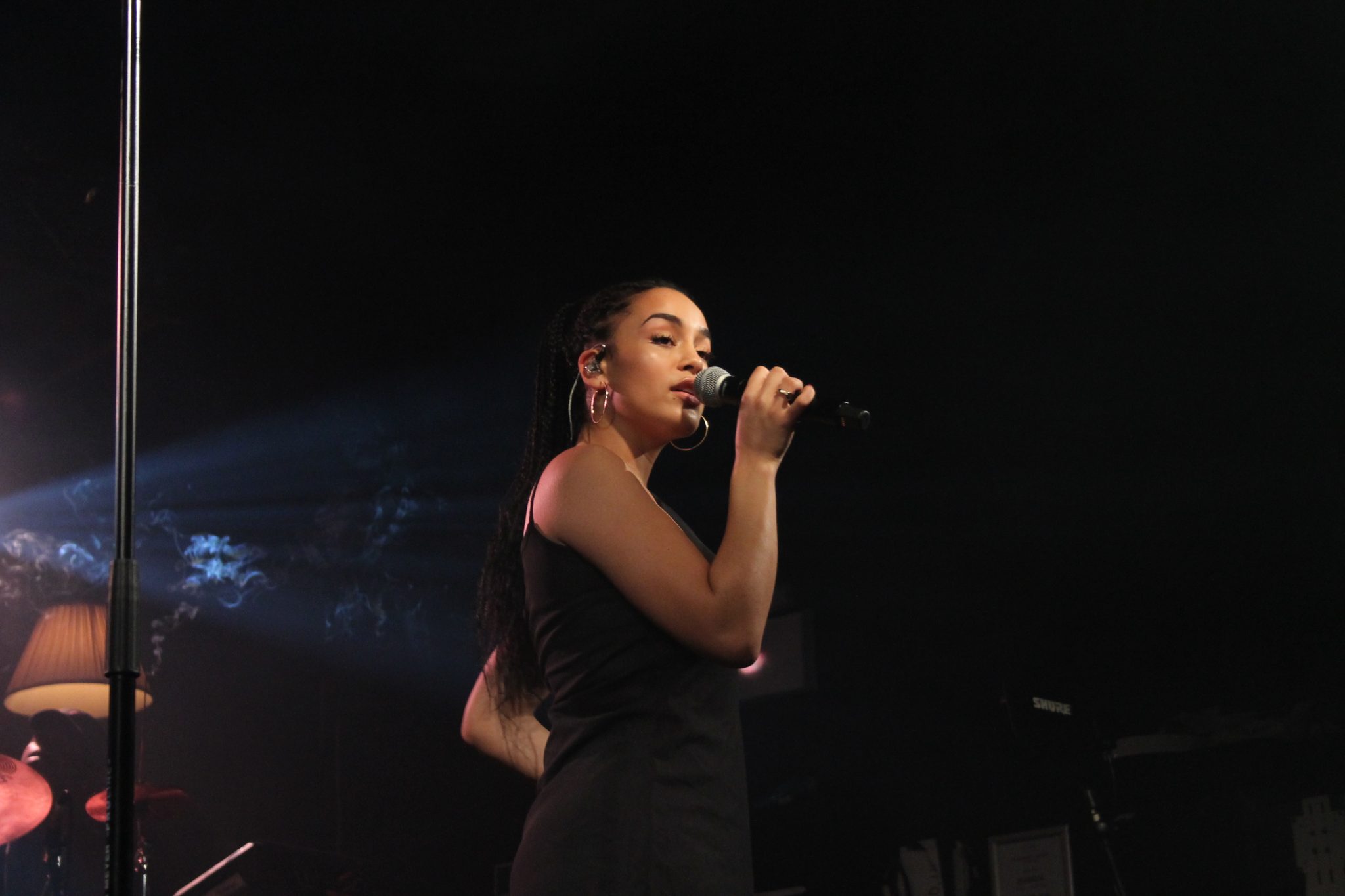 “This is a new song,” Jorja Smith half-giggles into the mic. “It’s about how shit the government is.” The crowd goes wild – she knows her market well. Bathed in dusky yellow light on a stage reminiscent of your mum’s front room, Jorja Smith is starting a small revolution of her own.

Two years after she posted her first song on Soundcloud as an 18-year-old with an A-level assignment due, Smith has come to be the face of British pop’s burgeoning reinvention. Meteoric is an overused word, but when your first major spot is with a no lesser name than Drake, anything else would be an understatement. She’s since chalked up features with Stormzy and a spot on the new Kendrick Lamar-curated Black Panther soundtrack, before capping off 2017 with the Brit Critics’ Choice Award. Not bad for a singer younger than most of her audience.

With those achievements under her belt, coupled with an overwhelmingly young and highly devout following, anticipation was high down Cowley Road for her gig last week. Hers was the only sold-out show at the O2 Academy this month; the cloakroom was one in one out long before we’d arrived; and the excitement was palpable. She’s clearly a musician right at the start of her career, and everyone wants a piece of it.

…Jorja Smith comes across as effortlessly and genuinely nice without fail.

Her tracks mix knowing lyrics with a voice that Amy Winehouse would be proud of, liquored and weighty, over everything from up-tempo garage to solo piano. Knowingly inspired by the grime scene that dominates British music, she’s found the sweet spot between street-wise and soulful, Nina Simone in a tracksuit and Reeboks.

On stage she cuts a humble figure, seemingly bewildered that she’s found success and fans in all the people screaming at her from the railing. Compared to Ed Sheeran’s excruciatingly irritating and frankly quite poor insistence that he’s just a normal bloke – Vice writer Joel Golby called him a “human wallet chain” – and among dozens of other musicians with evidently very bad people skills, Jorja Smith comes across as effortlessly and genuinely nice without fail. There’s no rehearsed stage banter or Father John Misty-style mystique; she lets her songs do most of the talking for her.

And what songs they are! They deal with every emotion you could expect a 20-year-old to feel and more, from guilt to affirmation to longing, each instantly recognisable and empathetic to every young person in the sweaty crowd. ‘On My Mind’ has her asserting her independence in the face of a reticent ex; ‘Teenage Fantasy’ is a musing on young naivety and premature relationships. She radiates empathy in person and in her music without breaking a sweat.

Her songs translate incredibly well to the live stage…

Only having a few songs publicly available at the moment, she uses her performance to showcase some unheard tracks off her upcoming album. The set does take a while to get going, with her hits back-loaded, but there’s plenty of variety in her new stuff to keep the attention. Among the ballads and belters she takes the opportunity to really show off her diversity of skills too: on ‘Lifeboats’ she shows off her rapping chops, with conversational flows that sound like Chance the Rapper covering ‘Parklife’, in the best possible way.

Her band are unintentional stars of the show as well – tight and well-rehearsed, they’re able to bolster Smith’s songs with ornamentation and fills exactly when they’re needed. Her songs translate incredibly well to the live stage, and her cover of Frank Ocean’s ‘Lost’ is a highlight for the band’s cohesion. Perhaps unsurprisingly they’re pushed to the back beneath the 70s lampshades and perform almost entirely in darkness, leaving as much space as possible for that all-encompassing voice, but a lot of her songs could easily fit into an Anderson .Paak-style set-up where the band are comfortable jamming underneath her lyrics.

That possibility is part of what makes seeing an act so clearly on the up so compelling – Jorja Smith really could go anywhere, and from what we saw at the O2 any of those paths will result in some amazing music. As she sauntered around the stage, with her voice forcing itself into every nook and cranny, you can only hope her ascent doesn’t take her off the earth with it.