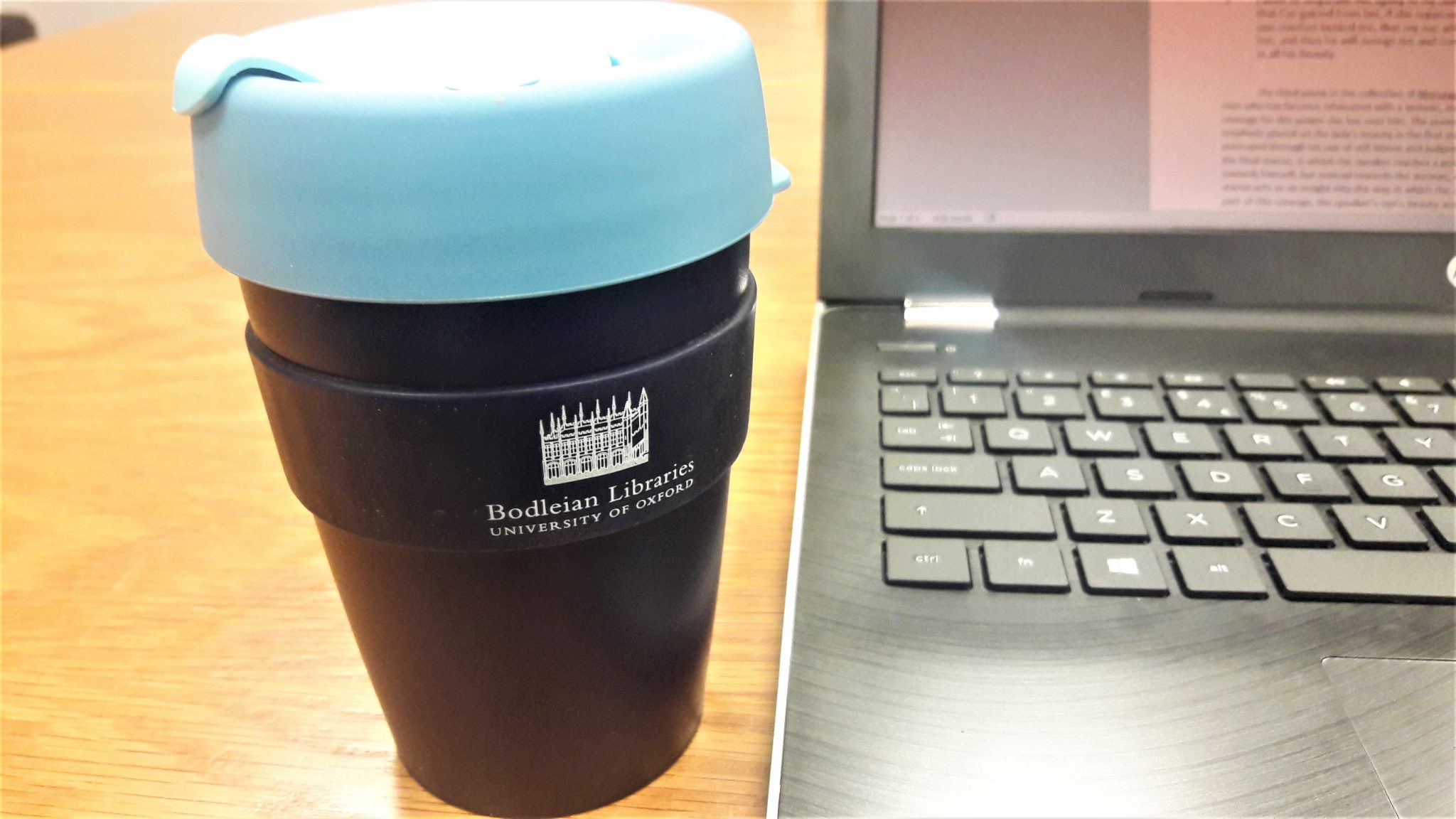 I’ve been meaning to try out the Bodleian’s keepcups for some time now, and at last I have the perfect excuse of writing a review. I got mine for £6 from the Taylorian Institute, one of the nine Bodleian libraries to sell the reusable coffee cups to Oxford students. Just £6 seems like a bargain to me, since these cups not only let you drink while you work in libraries – I’m personally very excited to sip on my coffee in the Lower Reading Room of the Bod – but they can also get you 50p off a drink in Pret.

Keepcups also come in different colours, which allow for a limited element of character expression through your stylistic choice of shade. I went for a dark blue cup with a light blue lid. What does this say about me, I wonder? Probably that I’m quite generic and should probably consider buying accessories that aren’t blue, black or grey every now and then. The other colours are slightly more interesting, with a red, navy and purple one that would have been my second choice, or a turquoise and yellow option that’s sure to brighten up your problem sheet sesh, no matter how bleak.

Keepcups are recyclable at the end of their lives, which makes them a hundred times better than their disposable counterparts

One of the reasons why keepcups are the only drinks containers to be allowed in the Bodleian (aside from bottles containing water) is that they supposedly prevent spillage. The keepcups themselves are designed with a ‘plug’ that covers the hole you drink out of, as I mentioned earlier. Obviously this makes sense in theory in preventing damage to the books and to people’s work, but how well does it work in practice? Well, when one of my friends saw me using my new drinks vessel in the library, her immediate reaction was to turn it upside down to see what would happen. Luckily, the ‘plug’ was closed and stopped my coffee drenching the carpet, but unfortunately the lid didn’t prove to be watertight; a few drops did fall out, but considering she was shaking it considerably vigorously, it’s hard to criticise this. It’s still true that if you knocked it over onto your laptop, the spillage would be enough to clean up quickly instead of destroying it completely.

My first thought was that the whole plug contraption in the lid would be almost impossible to clean, but the statements on the packaging that it’s “dishwasher safe” give me hope. Sadly I don’t have a dishwasher, and so my first instincts were actually correct; on my first evening with the keepcup, I found myself attacking every crevice in the lid from all angles in the hope of removing the coffee stains – which I did eventually manage to do, despite the effort it took.

All-in-all, the keepcup certainly does have its upsides, the most important of which is, of course, that it contributes to a reduction of waste produced by coffee shops. Instead of buying disposable cups that will probably just end up in landfill, keepcup users can continuously use the same cup in the knowledge that they are not a cause of this environmental issue. Not only that, but keepcups are recyclable at the end of their lives, which makes them a hundred times better than their disposable counterparts will are typically thrown away with the normal landfill-bound rubbish instead of recycled. Really, I can’t find a reason not to invest in one of these. Yes, it’s a little more trouble to clean at the end of the day, but the benefits of drinking coffee in the bod and saving the world undoubtedly outweigh the negatives of the effort it takes to keep a keepcup.