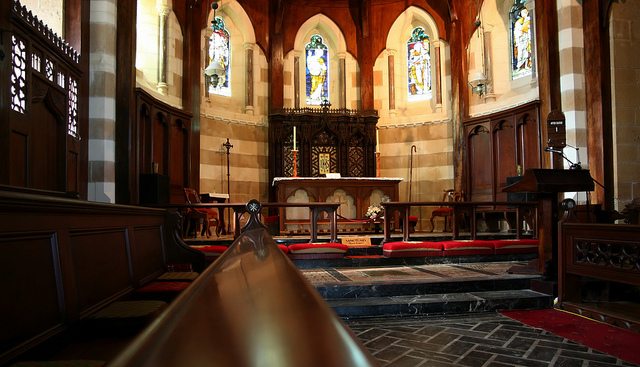 A short biography of George Bell, who had been Bishop of Chichester for 27 years when he died in 1958, begins by acknowledging a recurring pattern regarding the reputation of notable people. It points out that after such people die, their reputations are often reshaped and defamed by harsh criticism not voiced during their lifetimes – but that the Bishop had managed to be an exception to this rule.

This claim, published in 1971, would no longer be written today. Whilst the memory of George Bell has been cherished over the past 60 years due to his significant support of the Protestant opposition to Hitler, his work in bringing over many non-Aryan refugees from Germany and his emphatic opposition to the bombing of civilians during the Second World War, Bell’s reputation is now at risk of being utterly decimated. A complaint made to the Archbishop of Canterbury in 2013 accused Bell of having committed grotesque acts of child abuse in the 1940s and 50s. In response, the Church apologised and paid the accuser £16,800 in compensation. Various memorials, such as one proclaiming him a ‘champion of the oppressed’ in Chichester Cathedral, faced removal. An Eastbourne school, formerly known as the Bishop Bell Church of England School, has changed its name altogether.

Most would agree that this sort of action would be justified in the face of conclusive evidence against Bell. But it has since transpired that the church acted far too hastily. Following their acceptance of the abuse claims, a robust movement was sparked to defend Bell’s reputation, involving major journalists such as Charles Moore and Peter Hitchens. The Church then initiated an independent inquiry, led by Lord Carlile (one of the country’s top legal experts), which concluded that they had “rushed to judgement” and that the damage to Bell’s reputation was “just wrong”. Lord Carlile even went so far as to say that had he been prosecuting a case against Bell in court, Bell would have won. Nevertheless, this report was withheld by the Church for two months. After its eventual release, Justin Welby insisted that a “significant cloud” still hangs over Bell’s name in spite of Lord Carlile’s conclusions.

This strange outcome highlights an element of mystery that has surrounded the Bell case. The initial claim against Bell was anonymous and the church revealed no details about the accusation when making their apology. As mentioned, it took two months for the Church to release the Carlile report after having received it. Once it was released, Justin Welby did not follow the logical implications of the report, but refused to retract his statements because of a vague belief in a “cloud”. On the 31st January, the enigmatic plot thickened when the Church announced that a further anonymous and unspecified accusation had been made and was being investigated. Some felt the timing of this was suspicious, given that a motion to debate the restoration of Bell’s reputation was due to be voted on at the Church’s General Synod the following week. Lord Carlile, who knew nothing of this accusation during his investigation, described the announcement as ‘unwise, unnecessary and foolish’. At the very least, we can all recognise the strange and stark asymmetry between the previous withholding of the completed Carlile investigation report and the eagerness of the recent announcement of an incomplete investigation. Things got worse when it emerged that the Church of England had refused to allow Mrs Barbara Whitley, Bell’s 93-year-old niece, to have the lawyer of her choice represent her side in the proceedings – instead choosing on her behalf someone who is neither a lawyer nor known to Mrs Whitley.

At this point, while many will sympathise with the active supporters of George Bell, which now includes leading groups of historians, theologians and church leaders who have written public letters asking for Welby to retract his statement, others feel a sense of unease. After all, it is of course possible that the accusations are true. Justin Welby, in a recent interview with the Church Times, said that the alleged victims should be “treated equally importantly” as the reputation of George Bell. Some would say this does not go far enough: surely we must be more concerned for the alleged victims, who are still living, over the reputation of someone who died 60 years ago?

The general nervousness of the Church of England’s handling of the Bell case must be related to the fact that the Church currently faces over 3,000 complaints of sexual abuse

Perhaps a better way of framing this would be to say that we should be equally concerned for protecting Bell’s reputation against false accusations as we are for spoiling his reputation over true accusations. The trouble is that most people have an instinctive tendency to find the latter much easier than the former. When the Church of England apologised and paid the first alleged victim in 2015, The Guardian ran the story with the headline “Church of England Bishop George Bell abused young child”. At that stage, nothing was known about the identity of the accuser nor the accusations, and yet headlines announced the claims as fact. Once the Carlile report was made public, it would have been no less factual to run the headline ‘George Bell declared innocent of abuse claims’, yet nobody did so. In fact, most would consider this overstepping the mark.

The general nervousness of the Church of England’s handling of the Bell case must be related to the fact that the Church currently faces over 3,000 complaints of sexual abuse (including both long-standing and recent accusations). Other high-profile cases of clergy committing child abuse, such as that of former bishop Peter Ball, have highlighted the shocking failures of senior clerics to listen to victims and pass allegations on to the police. Taking into consideration the sharp spike in awareness of the prevalence of sexual abuse in society more broadly, following Weinstein, Larry Nassar and the #MeToo movement, it is not hard to imagine why the Archbishop of Canterbury would not want to stick his head above the parapet and defend the innocence of an archetypal establishment figure: a dead, white, male clergyman.

Courage, after all, comes at a cost. George Bell discovered this himself when his opposition to the bombing of innocent civilians during the Second World War put him on the wrong side of Winston Churchill, probably the main reason why he was never appointed Archbishop of Canterbury. In the absence of substantial evidence in support of the accusations against him, Bell’s reputation deserves to be defended. This is not only in the interest of truth, but also in the interest of maintaining a legacy of courageous leadership which is desperately needed among Bell’s clerical successors today.