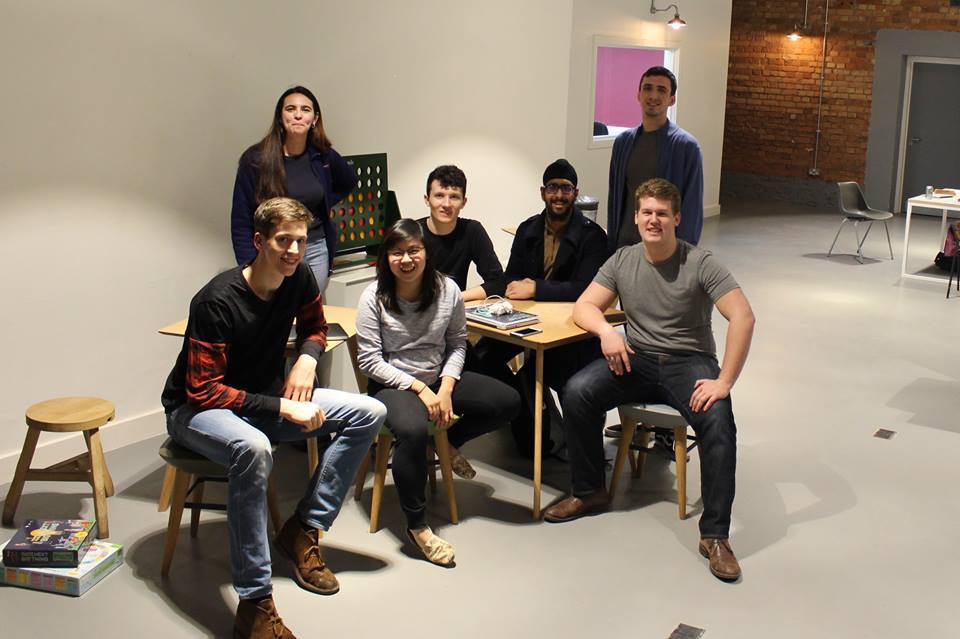 My first thought when I sat down to interview Denise Wong and Ed Kandel, two of the three team leaders of Campus Capital Oxford, was how impressed I was that they were juggling a degree, running a student VC, and still managing to look so put together. Both undergrads at Somerville, they look very much at home in the Oxford Foundry, which is fittingly where we conducted our meeting. The new space is directed by Ana Bakshi and is designed to encourage entrepreneurial ambition in Oxford students. It’s an interesting place — all dim lighting and leather sofas, akin to the interior of a hipster coffee shop. The other half looks like behind-the-scenes at Buzzfeed- gleaming grey desks and Apple MacBooks everywhere. After a reasonably stressful experience where I fill in a form and have a disastrous webcam photo taken, I’m handed a card with my face on it that leads me through some automatic gates into the world of student entrepreneurship.

Campus Capital Oxford are ‘an arm of Campus Capital, a venture capital fund,’ Denise explains, and I clearly don’t look any wiser, as she continues, ‘We’re looking to find start-ups run by or with at least one co-founder who is an Oxford Student. Then hopefully, if we find the really good ones, we can give them a bit of money to help them grow their business.’ It’s not just your average student association, though. Through their affiliation with Campus Capital, they are given up to £2 million to share with two other universities running similar schemes. ‘For each deal we’re able to invest up to £200,000,’ Denise explains.

My first question is simply to ask what inspired them to set up a venture capital fund in Oxford in the first place. Ed credits Denise with starting the whole thing off, and she laughs. ‘Well, I got really bored in Trinity [after Law mods] because no one else was around to do anything.’ We share a brief moment of solidarity over this, and she continues. ‘I was really into start-ups, because I knew I was going to work in a start-up in the summer as a software engineer, but I’d never really done any of the finance stuff. So, I decided the way to learn would be to try and start a VC here.’ However, there are numerous logistical difficulties when it comes to venture capital as it is a financial product, so you need to incorporate a company and be registered with the FCA. ‘I talked to a few people and they were just like, No, Denise, this is not going to work.’

Still, Denise was not discouraged and decided that setting up an ancillary to a larger company, with all the money and the legal structure already in place, would be ‘the next best thing’. She reached out to Campus Capital, a model of on-campus investment which is unique in the UK but inspired by similar successful schemes in American universities. It took Denise some persuading to get them on board, as they usually set up schemes in conjunction with university entrepreneurship centres. ‘For two months, they just said This isn’t happening, you need to raise some money. But then they came back and agreed to do a ‘lite’ version with us, you know, like lite versions of apps. This is why we have so much restriction on our investment criteria, because we’re a pilot program. We’re not attached to any university faculty.’ This is one of Campus Capital Oxford’s key selling points. ‘We were one of the first organisations like this to be independent of any faculty.’ Ed explains. ‘It’s a real student run venture — students for students, that’s our focus.’

The team currently consists of nine members, with three team leads coordinating- Denise, Edward, and Niles Breuer from Keble College. ‘We’re kind of growing that as a network, with the core team but also others who will bring in deals and things.’ Ed explains. I ask if they’re all undergraduate students, and they shake their heads. ‘We have two postgrads,’ says Ed. Denise pitches in, ‘One’s a DPhil and one’s an MBA.’ (Pretty solid people to have on board, I think to myself). ‘But- as far as I’m aware – we’re the first VC in Oxford that is open to undergrads. All the others are made up of postgrads only and are very much tied to Said. I still can’t pronounce that…it’s been a year.’ ‘I don’t think anyone can…’ Ed reassures her, and I decide not to admit that I’ve never even had reason to attempt it.

I move on to the slightly more patriotic subject of Oxford’s long-standing rivalry with Cambridge, and ask about comparable organisations there, and at other universities across the country. ‘So before Campus Capital, there was nothing like this.’ Ed explains. ‘Now, Campus Capital is slowly rolling it out to a few unis, and they’ve got three full programs in Manchester, Sheffield, and Lancaster. I think, because our program has been a success so far, they’re looking to extend that, but at the moment we’re kind of the trailblazers. There’s nothing in Cambridge yet, so that’s a big pro.’ Are they trying to get involved? Denise is quick to respond, ‘They’re trying to, but we were there first. They’re in our headlights, trying to catch up.’ I think to myself that perhaps all of our passive-aggressive Oxford pride is stemming from the current Varsity match atmosphere, and shift the conversation towards a more serious topic. Campus Capital Oxford place a huge focus on diversity, and I want to know what makes their team so diverse, and why this is important for a VC investing in student start-ups.

At the moment we’re kind of the trailblazers.

‘Firstly, our team is almost completely gender balanced — we have five men and four women. We also have different ethnicities and sexualities… we don’t see this as ‘ticking boxes’ — it’s an essential for a VC, because the aims of start-ups are so diverse and come from so many backgrounds, it’s only natural that VCs which are themselves diverse will be best placed to work with these start-ups.’ Ed explains. When they were recruiting their current team, Campus Capital Oxford actually held a second round of interviews because they initially had problems with gender diversity. ‘The problem in Oxford is never that you don’t have any qualified women,’ Denise explains, quite heatedly, ‘It’s just that they’re less aware this opportunity exists. Especially in STEM subjects, there is a lot more discrimination against women, and particularly in business as well. Venture Capital is a combination of both STEM and business, so the discrimination is paramount. If you look in Silicon Valley, the things that are said about female engineers and female partners in VCs are just horrendous.’ The problem reflects itself through statistics, as Ed informs me that only 3% of active VCs are women. ‘It’s not reflective of society, and VCs should reflect society,’ he says.

Sitting in the Foundry, surrounded by enterprising students, I wonder what the start-up scene is like in Oxford and how Campus Capital might contribute to the growth of entrepreneurial culture here. ‘There’s a lot of different ways to look at the start-up scene,’ Denise explains. ‘There’s a strong start-up community in Oxford, but it’s quite all over the place. Most students, if they decide they want to try a start-up, aren’t aware of the resources available and no one other than their friends are really aware that it’s happening. But that’s changing now, and things like the Foundry are trying to make that more important, they’re setting up a board and everything and centralising it.’ Campus Capital Oxford are currently talking with the Oxford Foundry and hoping to receive profiles from the start-ups they’re seeing, either to fund them or to point them in the right direction. Start-up competitions are becoming increasingly popular, with the ‘Tri-innovate’, a joint competition originally set up by Hertford, Pembroke and Wolfson, extending to now consist of five colleges. ‘So it’s not really tri-innovate,’ Denise comments. ‘Niles and I, our other team leader, are going to be talking to our principals about start-up competitions at our colleges. A lot of start-ups I’ve seen are either just ideas, which don’t really exist, or they’re all the way in Silicon Valley looking for money. A good way to find the ‘in-between’- which is where most of the exciting work happens – is to sort of create a new pipeline.’ The VC held their first Pub Social a few weeks ago and are hoping to branch out further in the future. ‘We’re hoping to tie in with Enterprising Oxford and Oxford Women in Business, and hold some events next term.’ Ed says. ‘We see a dual aim of helping those start-ups which are there, and also helping to grow those start-ups which are not quite fully incorporated yet.’

My final question is about student start-ups, and why Campus Capital Oxford think it’s so important to advise Oxford students who might want to propose a start-up. ‘Ed is particularly well placed to answer this question, because he actually started his own start-up.’ Denise says, laughing slightly. ‘At school,’ Ed confirms. “The main thing is, people might say I’m not experienced enough or I don’t have the skills yet. In reality, most successful entrepreneurs have said that university is the ‘ultimate do-over period’. You can start a start-up and even if you fail- which many do- you’ve still got a degree to fall back on, and there are loads of enterprising people all around you. Also, you’ll probably have the least baggage. As you get older, you’ll have kids and mortgages, and it will become increasingly hard to undertake the risks you sometimes have to take with start-ups.’ One thing Campus Capital hope to promote among ambitious students is seeing failure as a learning process. Both in America and Shanghai, where Denise spent time working, there’s less focus on getting a product perfect the first time. ‘A lot of places, the reason people don’t want to try start-ups is because they have this desire for it to be the perfect product, and want it to look like Facebook straight away. And that’s just realistically unachievable — they have a team of several thousand at Facebook. It’s just not going to happen.’ Entrepreneurial culture in the United States focuses on learning from your mistakes and becoming stronger and smarter from those mistakes. Denise and Ed want to bring this attitude to students in Oxford. ‘There will be no other time in your life when it’s acceptable to fail so spectacularly,’ Denise explains. ‘The aim is to encourage you to do that, because if you do fail, you will still learn something valuable, and if you don’t, hopefully you will have done something very valuable for society.’

Chicken saltimbocca on a budget

Von-Trapped by the memories of a first love