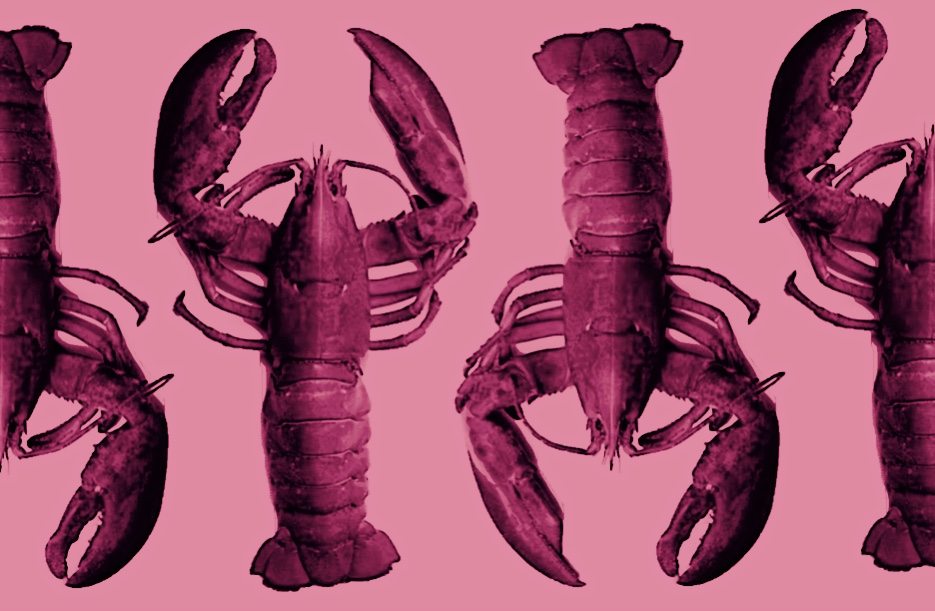 The s/s 2018 runways were filled with artistic references and influences, however collaborations between the fashion and art world are by no means a new thing. The formalization of the relationship between the two likely started with Elsa Schiaparelli. Her designs referenced many art movements: Modernism, Futurism, Cubism and Art Deco, and she worked with Jean Cocteau, Man Ray and Albert Giacometti, but her most enduring artistic influence was Surrealism. And the first fashion- art collaboration was devised by Schiaparelli in conjunction with Salvador Dalí in the 1930s.

In homage to his 1934 piece New York Dream-Man Finds Lobster in Place of Phone, together the designer and artist created the printed silk organza lobster dress worn by Wallace Simpson for Vogue in 1937. Apparently, Dalí wanted to smear mayonnaise on the dress (he considered lobsters to have sexual connotations- in The Dream of Venus seafood was used to create costumes for the nude models- so his ‘mayonnaise’ moment, was perhaps a little bit more risqué than you might assume. Or at least I would like to imagine that Dalí had a thing for ~sexy sauces~). However, it is currently displayed condiment-free in the Philadelphia Museum of Art.

They also worked together to create the famous pink Shoe Hat, which featured in Schiaparelli’s a/w 1937 collection. The idea was apparently inspired by a slipper that Dali stole as a schoolboy from his teacher and wore on his head. And Schiaparelli created the Tear Dress and Skeleton Dress in 1938 from drawings done by Dalí.  For both of them the link between fashion and art was enduring- Dalí went on to create a series of Surrealist jewelry himself and Cristóbal Balenciaga called Schiaparelli “the only true artist in fashion”.

Cristóbal Balenciaga called Schiaparelli “the only true artist in fashion”

The abstract, geometric work produced by Piet Mondrian, as part of the Dutch Art movement De Stijl, also influenced fashion history as early as the 1930s, when Lola Prusac, working for Hermès, produced a series of bags with blue, red and yellow square inlays. And in 1965 Yves Saint Laurent created his ‘Mondrian Collection’ based exclusively upon the work of the artist. The collection consisted of six jersey and silk A-line dresses. The material used for the dresses was not printed, but rather dyed before construction, which meant that the completed garments mirrored the Modernist simplicity of the artworks which inspired them.

Andy Warhol actually began his artistic career in fashion illustration (he even designed an advert for Schiaparelli’s gloves), and even launched his own magazine, Interview, which featured figures prominent in both the fashion and art worlds. However, it was following the success of his Campbell soup cans that his artwork became wearable. In New York society girls began to wear dresses with a repeated print of the design. It became so popular that between 1966-68 Campbell’s themselves produced a paper version which could be bought for $1 and two cans of soup.

In 1991 Gianni Versace created a Pop Art collection, in which Warhol’s screen prints of Marilyn Monroe were heavily featured. This collection was revisited by the label in a/w 2017 to much acclaim. Raf Simons has repeatedly worked with the Andy Warhol Foundation- first in 2013 for Dior and in 2017 embarked on a four year collaboration as Chief Creative Officer for Calvin Klein.

Issey Miyake was inspired by the ‘rhythm pleats’ that he saw in Henri Rousseau’s 1910 painting The Dream, and so he developed his Pleats Please collection in 1993. And in 1996 Miyake began a Guest Artist Series, printing pieces by other artists onto the garments in such a way that when pleated it did not distort the original work. The first artist to collaborate with Miyake was Yasumasa Morimura, who created an image of his own body entwined with a female nude from Jean Auguste Dominique Ingres’ 1856 painting La Source.

The Merce Cunningham dance company collaborated with Rei Kawakubo in 1997 for her s/s collection entitled ‘Body Meets Dress, Dress Meets Body’. The distorted bulbous and fluid shapes reconsidered not only how a person’s body should look, but also how it should move in and inhabit space.

Similarly, the 2016 show for Kanye West’s Adidas collection referenced Vanessa Beecroft’s 2005 performance installation, with models, rather than parading down a catwalk, standing stationary in a sort of pseudo-military style.

it is a relationship which has endured and evolved over the years, with results that are often as visually and conceptually stunning and surprising as the original lobster dress

In the past few years collaborations between fashion houses and artists have gained momentum, and become a mainstay on the runway:

In 2012 the Rodarte incorporated Van Gogh’s work into their collection, with chiffon dresses printed with his paintings of sunflowers.

In 2013 Alexander McQueen’s collection was produced in collaboration with Damien Hirst and based upon his Entomology pieces. It featured 30 chiffon scarves and dresses printed with almost geometric, haunting prints of butterflies and other insects.

The Japanese contemporary artist Takashi Murakami has collaborated with a number of fashion houses over the years, perhaps most successfully with Marc Jacobs for Louis Vuitton since 2003. He designed a series of successful of handbags for the label (the ‘Cherry Blossom’, ‘Character’ and ‘Monocamouflage’ became cov-e-ted) He also redesigned their famous LV logo print, reimagining it in a brightly coloured, playful, kawaii style.

The label also worked with Japanese polka-dot queen Yayoi Kusama in 2012, creating not only a number of wearable pieces but also the most beautiful spotty pumpkin-scattered shop fronts imaginable. Louis Vuitton also worked with the Chapman Brothers for their a/w 2013 collection, creating a series of Goya-esque eyeball printed bags. And for his collaboration with Louis Vuitton in 2017, Jeff Koons- in true Ready-Made style- designed a series of bags printed with other artists’ (such as Van Gogh, Da Vinci, Rubens, Fragonard and Titan) work.

Louis Vuitton also collaborated with the conceptual artist Daniel Buren in 2013 and Marc Jacobs. Not only were the artist’s canvas check designs incorporated into the clothes, but Buren also produced the show itself, which was a visually stunning installation, featuring yellow, white and black checkered everything and moving escalators. And Jacob’s 2015 limited-edition collection was inspired by Assume Vivid Astro Focus’ 2011 drawing series The Cyclops Trannies.

The way in which art influences the fashion world has developed and changed since the original collaboration between Dalí and Schiaparelli. However, it is a relationship which has endured and evolved over the years, with results that are often as visually and conceptually stunning and surprising as the original lobster dress.