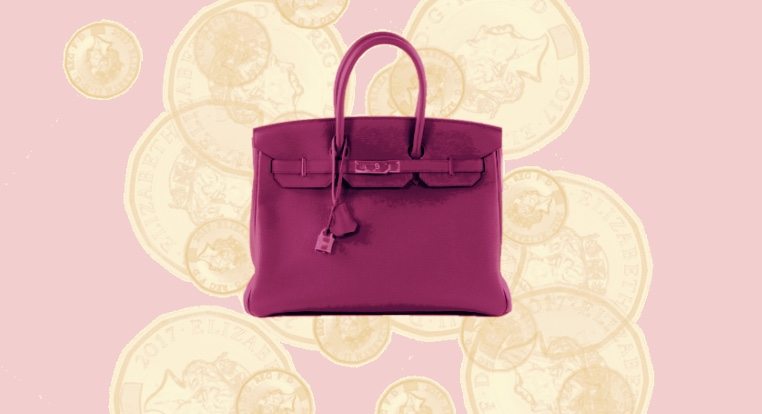 So the story goes that the in 1981, whilst on a flight to London from Paris, Anglo-French singer and actress Jane Birkin and Hermès CEO Jean-Louis Dumas were sat next to each other when Birkin spilled the contents of her straw bag all over the cabin floor. Apparently, what followed was a conversation about the inadequacy of weekend bags (interestingly this is also my go-to topic when there is a lull in conversation at the pub*). 3 years later Dumas released the eponymous Birkin bag.

The Birkin has become the world’s most expensive handbag. Prices start at around $5,000, or $7,000, or, according to Forbes, $12,000 (it turns out that it’s actually quite hard to find out exactly how much they are to buy new) and in 2017 Christie’s in Hong Kong sold a matte Himalayan crocodile-skin Birkin with a ten-carat diamond-studded white-gold clasp and lock for $380,000.

The explanation Hermès puts forward to justify the price is the quality craftsmanship involved in the creation of a Birkin: each bag has been made single artiste and takes 18 hours to create. Mm, maybe.

Not to get too intellectual, but in his quality treatise “The Theory of the Leisure Class”. Thorstein Veblen suggested that certain commodities, Veblen goods, do not follow normal economic logic. Why?, you (don’t) ask… Well, whereas normally as the price of something increases the demand for in decreases, whereas for some goods, like Birkins, the more expensive they are, the more able they are to affirm the status of someone who owns one, and so the more coveted they become.

Also, on the Wikipedia page for Birkin bags (because I do good research) “Conspicuous consumption”- a term introduced by Veblen himself- and “Materialism” are linked in the “See Also” pages and so I clearly speak truths.

As Samantha exclaims in the episode of Sex and the City where she fails to acquire one: “Oh honey, it’s not so much the style, it’s what carrying it means!”

“Oh honey, it’s not so much the style, it’s what carrying it means!”

It was suggested in “Signaling status with luxury goods: the role of brand prominence” (Han, Nunes & Dreze 2010) that rich people can be split into two groups: ‘parvenus’ and ‘patricians’. Whereas ‘parvenus’ use material goods to visibly dissociate themselves from those who are not wealthy, ‘patricians’ want to ‘subtly’ signal to other wealthy people that they also have the dolla. So ‘patricians’ tend to choose expensive luxury goods without obvious branding- like Birkin bags. The most iconic bag in the world.

Having a Birkin bag on your arm is like a declaration of status, of power, of worth.

Victoria Beckham, Jennifer Lopez, Kim Kardashian, Alessandra Ambrosio and Kate Moss are all have (at least) one. And another apparent fan of the bags is Canadian darling and musician Drake. Last year he admitted to stockpiling the bags for his future wife. He has created a Birkin mountain, a leather dowry.

Last year he admitted to stockpiling the bags for his future wife. He has created a Birkin mountain, a leather dowry

As he explained (if there can be a reasonable explanation) to The Hollywood Reporter: “I’m a fan of Hermès Birkins. There’s very few things in this world – tangible things, anyway – that hold their value and sort of appreciate as the years go on…  It was one of the things that I started collecting as well for the woman that I end up with one day, so I have fairly vast collection of Hermès to offer somebody at the point in life”.

To be fair to him he’s not wrong- over the past 35 years Birkin bags have increased in value by 500 percent, which is more than the US stock market or gold. And the price is predicted to double in the next 10 years. So, it’s not actually a bad thing to invest in… Assuming that you have the initial cash monies.

Barbara Segal, a New-York based artist, carves luxury items out of stone and her version of the Birkin bag is made true to size from orange calcite, weighs 100 pounds and costs $45,000. She created her Designer Handbag and Cathedral Candy series, to “explore society’s long-standing obsession with status symbols and my own ambivalent relationship with them”.

She states that her sculptures highlight people’s constant pursuit of ephemeral prizes and things that confer status. The stone appears to transform the bag into an enduring icon, almost a religious item, a relic, whilst reimagining its status as a power symbol within contemporary society and commenting about the value that people ascribe to luxury goods.

Segal explained her idea to the New York Post: “You can’t carry them around, but so many women with Birkins just stare at [their bags]. They’ll say, ‘My bag is a work of art’”.