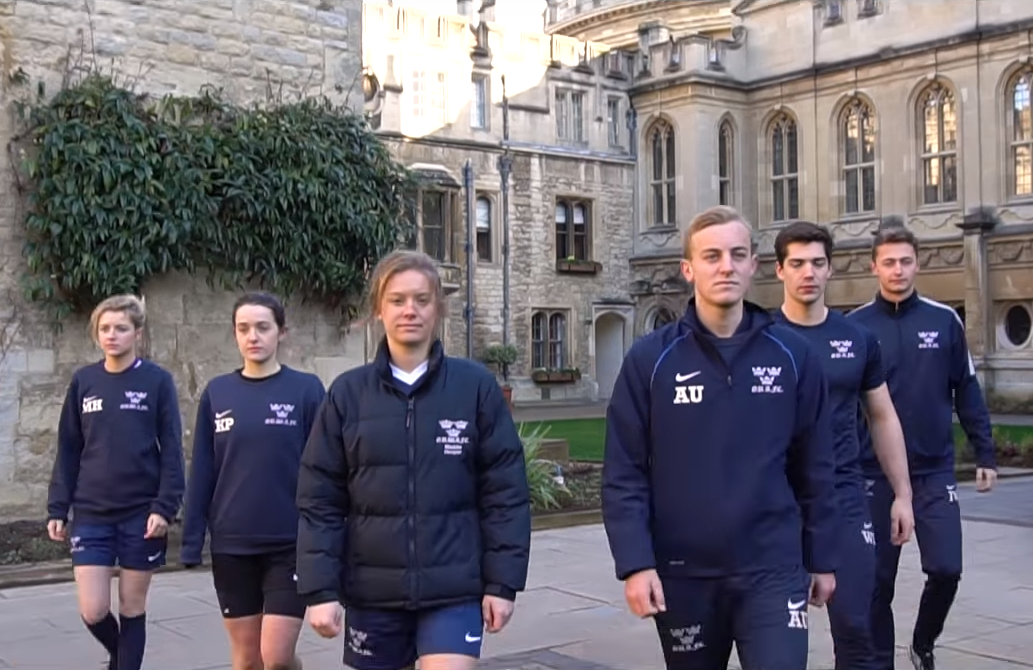 Oxford won both the men’s and women’s football Varsity matches today in what proved to be a successful day out for OUAFC.

This is the fourth year in a row that Oxford have won both fixtures as they celebrated more success at The Hive, home of Barnet FC, following last year’s inaugural double-header at the ground.

The day was also historic for other reasons as it marked the first time in a major sport that the women’s fixture has followed, not preceded, the men’s.

In the men’s game, Oxford, who had beaten rivals Cambridge earlier this month in the final BUCS fixture of their season, started brightly and dominated in the early stages, taking the lead in the 24th minute through main front-man Dom Thelen.

The dark blues soon doubled their lead as Leo Ackerman drove forwards from the back and slotted past Boughton, Cambridge’s goalkeeper, into the bottom corner just past the half hour mark. The score remained 2-0 as Oxford led comfortably going into half-time.

The game was more highly contested after the break, until last year’s varsity hero Dom Thelen rounded off a fine performance by scoring his second of the match with just over ten minutes to go, chipping over the keeper into the Cambridge net and putting the game to bed.

Thelen was awarded man of the match for his performance and an important brace.

The women’s game proved a tighter affair, and Oxford had to thrice come from behind before eventually triumphing after a nail-biting penalty shoot-out.

Their light blue counterparts took the lead in the 16th minute through Jen Atherton who headed in from a corner.

Oxford drew level soon before the break, Beverley Leon putting the ball home from a rebound in the 40th minute, but still went into half-time a goal down as they conceded soon after from another Cambridge corner.

Cambridge then went 3-1 up as Atherton got her second of the game ten minutes into the second half, burying a well taken penalty past substitute keeper May Martin after Oxford were adjudged to have committed a foul in the box.

Oxford were quick to respond, however, and bounced back through Leon’s second, a header in the 60th minute that set up a tense finale. The dark blues left it late to equalise, and substitute Mary Hintze took the game to penalties with a matter of minutes remaining as she capitalised on a Cambridge defensive error.

Oxford went first in the shoot-out and, after a save from Martin and a miss from Cambridge, they capped off a good day for Oxford by winning 4-2 on penalties.