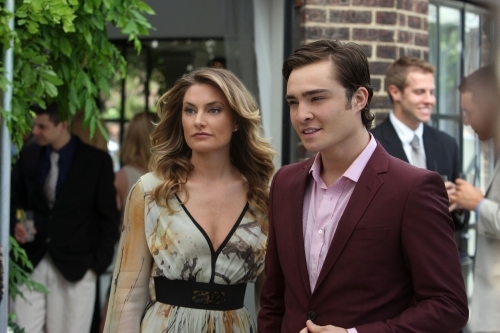 Gossip Girl: the iconic teen drama about the scandalous lives of Manhattan’s elite, to quote the anonymous blogger herself. A classic binge-watch for countless young adults, the show’s influence is great even six years after its finale, both due to Blair’s notoriously preppy wardrobe and, though by no means the first or last series to exploit New York’s lavish luxury and stunning skyline, its memorable portrayal of the fast-paced Manhattan social scene. But what seems to have stuck with young viewers most prominently are the show’s romances. While this comes as no surprise, the cult following behind Gossip Girl’s most beloved couple, Chuck Bass and Blair Waldorf (or ‘Chair’) is disturbingly problematic.

Even now, one need not scroll far down Twitter or Facebook before stumbling upon some sort of ode to the fictional couple. ‘The perfect couple’ and ‘relationship goals’ memes, fan accounts, and relatable tweets circulate the internet endlessly, indicative of the overwhelmingly affection for this on-screen pairing, with many expressing sadness that the next generation of teenage girls may never witness the love between Chuck and Blair.

This blind fangirling is part of a huge problem. The character of Chuck is guilty of sexual harassment and assault. In the first episode of Gossip Girl, we are introduced to him as he traps Serena and repeatedly pesters her, both verbally and physically, until she has to push him away from her body. It quickly becomes more sinister when the fourteen year old Jenny is narrowly saved from rape, having been dragged up to a rooftop by Chuck, who pins down the screaming and flailing girl. Even for those who are uneducated on the many subtle and blurry forms of sexual harassment or assault, this scene is a clear-cut depiction of an attempted rape of a minor.

Chuck continues in a similar vain. In fact, the show does a good job of consistent characterisation, with this sexual menace heavily objectifying women on an almost every-episode basis. While remaining uncommitted and reckless in his troublesome relationship with Blair, he is at one point sued for sexual harassment of the female employees at his father’s hotel, whom he holds in even greater contempt than his female peers. Chuck Bass is a caricature of a very particular type of entitled and misogynistic man; the kind we steer clear of in nightclubs and give fake numbers to in bars, in fear of how they would deal with the unfamiliar concept of rejection.

Why, then, do we have a cohort of young women idolising the idea of Chuck Bass and aspiring to find a boyfriend who mirrors him in real life? In short, a persistent sex offender and dangerous misogynist is placed on a pedestal because he is conventionally handsome; girls are watching episode after episode about a potential child-rapist and they’re swooning. The real-world repercussions of this idolisation are enormous, and it speaks volumes about the free-passes that society gives attractive men. These love-struck teenagers point to a deeper issue in our attitude towards sexual assault. There clearly remains the worrying notion that creepy pursuits by attractive men are in some way a compliment, that Serena was an idiot, and that Jenny was lucky.

But we live in a world with real Serenas and real Jennys, and unfortunately, real Chucks. With all the recent news stories, sexual crimes have never been more talked about. With the uprising of victims, however, comes the predictable uprising of those who defend the perpetrators. We need to be raising a generation of young women who are fully aware of their right to feel safe and respected, and so with every fifteen year old girl who tells me how much she would love to date a man like Chuck Bass, I can’t help but feel that she is already a victim. She is looking through a distorted lens in which good looks and superficial charm supersede the most basic decent behaviour. Who, after all, can honestly put their hand on their heart and say that they would not be heartbroken and sickened to discover that their partner was actually guilty of a lifetime of sexual assaults? Yet when we embed these crimes within a framework of luxury and riches, these characters are able to come out of the other side as the good guy, not the TV villain that they ought to be.

…the love affair between Chuck and Blair is toxic, manipulative, and emotionally abusive.

The writers of Gossip Girl are somewhat responsible for this disturbing acceptance of Chuck. We do not live in a perfect world and there is nothing morally wrong with creating characters who do horrendous things, but when screenwriters choose to incorporate issues like rape and assault into their shows, they have a responsibility to do them justice, especially when the show is targeted at impressionable young adults who are only just emerging into their sexualities and finding their self-worth. Perhaps if Gossip Girl had had Chuck condemned and ostracised by his peers, young viewers would feel compelled to likewise condemn such behaviour. Instead we saw Jenny’s brother in a close companionship with his sister’s attacker, and besides a small period of hostility, her own father welcoming Chuck into the family, completely normalising predatory behaviour. Alternatively, by allowing Chuck to maintain his popularity and desirability but simultaneously portraying this as problematic, the show could have criticised society at large, highlighting to viewers the persistent practice of ‘turning a blind eye’, so prompting the viewer more forcefully to think  “Wow, that’s horrendous. Something needs to change.”

Unfortunately, it is clear that the show haphazardly introduces themes far too serious for it to swallow, doing away with them nonchalantly for the sake of convenience; it wants the momentary scandal but not the heavy effect that this would realistically have upon its characters’ lives and psyches, in a series that otherwise aims to be realistic, if not slightly exaggerated, in its characterisations. The way in which Chuck is forgiven without much thought at all, and then idolised and adored on and off the screen, is almost as much of an issue as the sexual misdemeanours themselves, and I wish that Gossip Girl had been an intelligent enough show to make this seem like a problem.

If this wasn’t enough of a reason for you to crown a new favourite couple, the love affair between Chuck and Blair is toxic, manipulative, and emotionally abusive. It panders to the idea that love is meant to make us feel awful all of the time, and while those feelings may be powerful, they don’t always constitute a healthy relationship. Chuck and Blair exist together in a cycle of destruction and pain, hurting each other constantly, projecting psychological issues onto one another, and feeding off their problems. Chuck has Blair sleep with other characters for his own financial gain, refusing to commit but sabotaging all of her happy relationships when he can’t have her. Blair acknowledges that she’s trapped in a manipulative situation. “He brings out the worst in me…” she confesses. “people don’t write sonnets about being compatible…it’s complicated, intense, all-consuming…maybe [Chuck] wants me to be as unhappy as [he] is.” ‘Chair’ have all the hallmarks of a toxic relationship, one which in the real world would self-combust. And, like with sexual harassment, this is a situation to which many people fall victim, having their self-esteems and mental health continuously chipped away at. The romanticising of it along with the perpetuation of the false idea that love is synonymous with consuming despair is a cliché and irresponsible trope.

Gossip Girl had the opportunity to make an important statement, and instead it only managed to expand unhealthy attitudes. The nonetheless positive responses to this are testament to just how far we still have to go in educating society and protecting women.