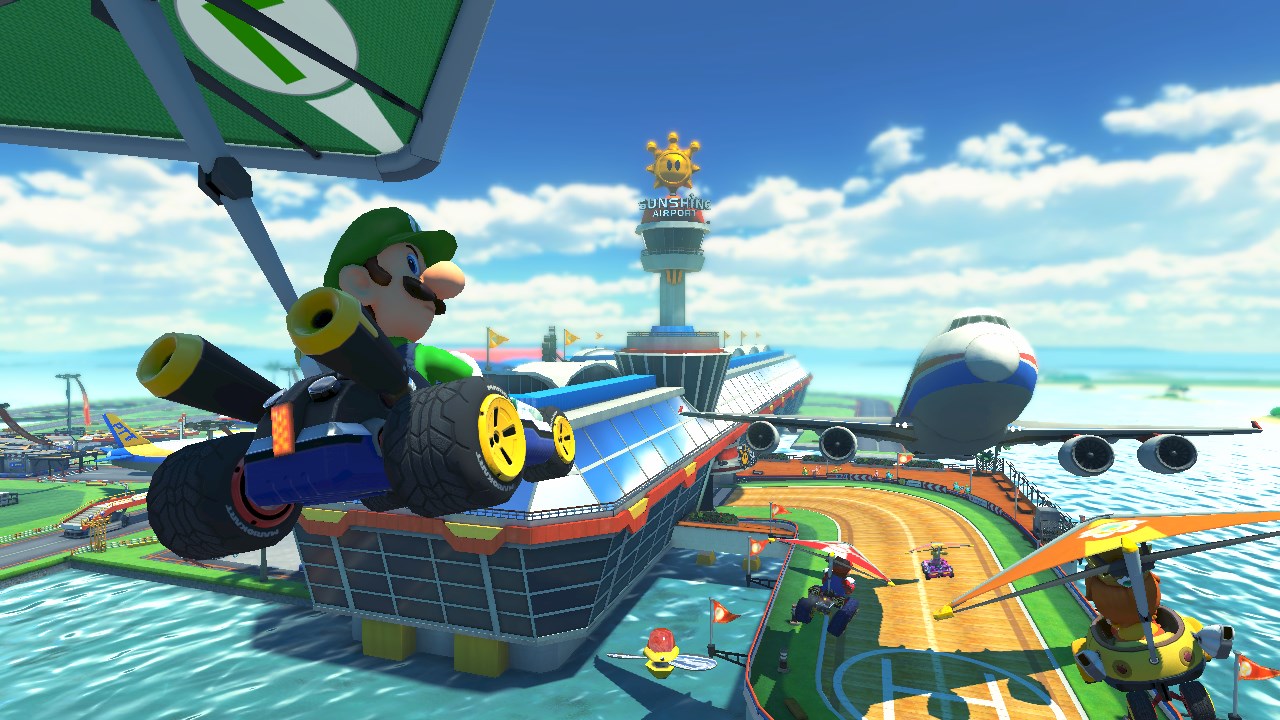 Believe it or not fellow gamers, but April 11th 2018 marked the 10th anniversary of Mario Kart Wii’s UK release. In honour of the game that encouraged hubris, pathos and lifelong grudges, let’s take a look back at some of the game’s most notable tracks:

No, it’s not exactly the most challenging track. In fact, it’s physically impossible to fall off it. You could meander about on the grass for a bit if that takes your fancy, or crash into one of the green pipes for no discernible reason, but there’s nothing here that will trouble the average Karter. Nonetheless, Luigi Circuit is an important introductory track for an unpractised player.

Also, if you decide to play as a Mii Character, the head of the Luigi statue will change to a superimposed head of your Mii. Depending on the quality of said Mii face, the result will be mildly unsettling at best, or a deranged abomination at worst.

Colloquial Names: Shake it All Up, Ride My Car

Miis make another appearance in this colourful course, albeit in more aggressive fashion. Just when you’re in the final part of the race, you’l find some useful speed boosts that could help you get the advantage over the other players. The catch, however, comes as these boosts are guarded by Miis in moving cars.

If you can make it through before they block the boosts, then you’re on easy street. If you don’t, then you’ll crash into the car and have to spend several seconds staring at its face as you accelerate and try to avoid humiliation when various players zoom past you. You’ll also experience the same awkwardness if you choose the wrong elevator, as you slowly make your way up while other players overtake you on the other side. Basically, if you want to get a good position in this race, memorise the patterns.

If you’re looking for something slightly less stressful, however, you could always try this battle arena. Although it’s clearly not a Nintendo Wii original, it’s one of the best arenas for competitive play with friends. You’ve got the more aggressive option of plunging into the centre and hoping to hit enemies instantly with shells, or you can take a more leisurely route round the edges.

The latter option also creates decent tension if you and your friends are travelling around the edge in opposite directions, waiting until you intersect and then attempting to throw a well-aimed green shell or a sneaky banana peal. Also, if you’re down to one balloon on balloon battle and fear impending doom from a red or blue shell, you can simply launch yourself off the side into a dark abyss, and thus avoid the shame of an easy defeat.

Colloquial Name: The One with Bomb Cars

You’d think a 3+ rated racing game would steer clear (pun intended) of any sinister imagery, but the multiple bob-omb cars that hurtle through this course seem to suggest otherwise. As if you aren’t having enough trouble trying to manoeuvre between the other cars on the road to make sure you aren’t squished, you’ve also got to avoid getting blown up into the air by these guys.

But if you forget about the multiple possibilities of destruction and carnage, this course is a pretty relaxing ride.

Colloquial Names: The Nutbuster, Through the Fire and Flames

Actually, Moonview Highway is a breeze when you compare it with this demon. A stalwart component of the Mario Kart series since the original Super Mario Kart, Rainbow Road has been the the gamer’s source of anguish for over 25 years. Judge one turning wrong, and you’ll hurtle off into space, ready to be picked up again by an unsympathetic Lakitu. If you fancy a bit of pain and anger, however, why not try the the course on frantic mode, hard CPU difficulty, and on Mirror Mode? You may live to regret it, but it’s worth a try.

So, if you’ve been neglecting this classic game in recent years, give it some much-needed playtime to honour its 10th birthday.