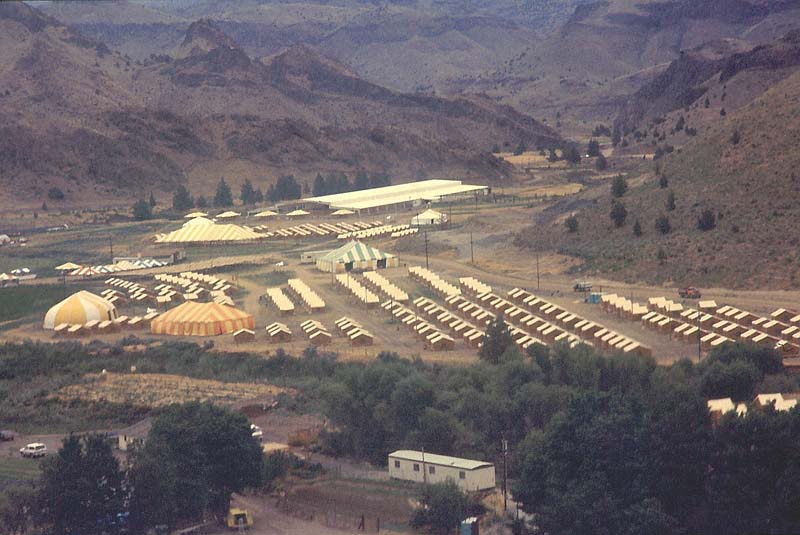 Wild Wild Country: scandal and spirituality in the Midwest

From indie one-timer Will Allen’s semi-autobiographical Holy Hell, to bona fide Hollywood giant Francis Ford Coppola’s Apocalypse Now, filmmakers have always been attracted to cults. There is something eerily attractive about life on the inside. The latest addition to the already well-stocked library of documentaries on this subject is Chaplain and Maclain Way’s neat, Netflix-funded Wild Wild Country.

This six-part docuseries joins an impressive portfolio of documentaries commissioned by the streaming giant on subjects ranging from true crime (‘Making a Murderer’) to the global food trade (‘Rotten’) to the rise of Dr Dre (‘The Defiant Ones’). This particular venture, concerning the rise and fall of pseudo zen-master Bhagwan Rajneesh’s cult in the 1980s, is a superbly produced and immaculately edited portrayal of cult-life. Indeed, the production is so unashamedly cinematic that it more closely resembles a House of Cards episode than a documentary: combining sleek editing, sophisticated animation, and deftly interwoven archival and interview footage, it informs and entertains, dispassionately recounts as well as prompts intellectual interpretation. Who needs a fictitious narrative to make diverting television when history has done the work for you?

The story of the cult is so absurd one would think that the Way brothers had mistaken fact for fiction, conflating the story of Captain Kurtz with Bhagwan Rajneesh. The cult, at first a spiritual self-help group, was formed in India by Rajneesh, a disillusioned guru and spiritual mystic. Eventually, Rajneesh established an ashram in Pune, attracting many Indian and international visitors with his experimental self-help methods. His mixing of traditional strands of meditative, spiritual practice with the more unorthodox indulgences of free love and physical aggression is depicted with graphic realism throughout, with sudden cuts to sexual and sometimes violent footage covertly captured by members of the commune.

This is television’s shabby chic…

By 1981, Rajneesh had offended many in the Indian orthodoxy and circumstances forced him to leave India. The US – with its constitutional protection of religious freedom – seemed the perfect place for him to realise his dream of a utopian commune in service of the “awakened man”. Devotees of the Bhagwan established a flourishing colony appropriately named ‘Rajneeshpuram’ (the city after Rajneesh) on a 60,000-acre ranch in central Oregon, replete with state-of-the-art irrigation systems, a fire service, police force, reservoir and even a sewage reclamation plant.

The construction of the commune is documented with careful attention to detail. Contemporaneously shot home movies are seamlessly sewn to news footage and press videos. The construction scene is faultlessly executed: it maintains the rustic, grainy aesthetic of an indie documentary whilst carrying the glitz of a first-rate TV-show. This is television’s shabby-chic.

The more scandalous activities of the cult are approached by the directors with caution. Among the cult’s attributed crimes was a bioterror attack in 1984, part of an elaborate plan to rig the elections in Wasco County. Salmonella was cultivated by scientists in the on-sight laboratory in Rajneeshpuram and subsequently spread on foodstuffs in eateries all over the county. Over 700 people ultimately contracted the bacterial disease in what was the largest planned food-poisoning case in America’s history. In conjunction with this attack, the cult enlisted the help of hundreds of homeless, enticing them with food, shelter and the false promise of a safeguarded place in the commune. After local officials foiled the cult’s plans by campaigning to change voting laws in Wasco County, cult leaders authorised the sedation of hundreds of homeless before expelling them from their ranks.

But the Way brothers choose not to pass judgement on what are, without a doubt, acts of unthinkable callousness. They instead focus their directorial gaze on the orchestrator of the attack, Bhagwan’s personal secretary Ma Anand Sheela. When given the chance to expiate her sins, she refuses, fervently declaring that she was acting in the best interests of the commune, and by extension, its leader. Sheela embodies the posthumous power Bhagwan still has over his people: her lack of remorse for the attack, contempt for the critics of the commune and unflinching loyalty to the spiritual Guru is downright eerie.

That is perhaps the strongest point of Wild Wild Country: the directors extract from the commune’s well-documented history individuals who have personalised stories; indeed, it is easy to forget that a collectivist enterprise is run and maintained by individuals. Sheela, currently exiled in Switzerland after serving a 20-year sentence for attempted murder in the U.S., presides over the narrative with a personable, if somewhat sinister, charm, and it is no surprise that she rose within the cult to the position of substitute leader during Bhagwan’s long periods of silence. It’s easy to forget that this woman is a criminal. She both captivates and repulses.

It all seems fit for a Copolla epic: The Godfather meets Apocalypse Now with the chicness of a David Fincher thriller thrown in for good measure. But there is something utterly unique about this series. Each side is given a fair hearing: rather than forcing a thesis upon the viewer, the docuseries exhibits a showdown between the Rajneeshees and their opponents, editorially mediated and marshalled by the Way brothers themselves. It seems that Netflix, with Wild Wild Country, has struck gold.