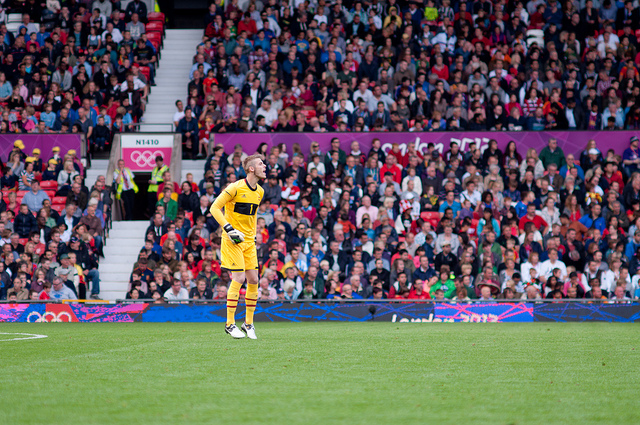 Manchester City’s 3-2 defeat to their bitter rivals United in April, it represented a clash between the top two sides in the country this season. What we also saw was a stand-off between the league’s two-standout goalkeepers: de Gea for United, and Ederson for City. At the start of the season everyone would have put de Gea’s as their number one goalkeeper on account of a shot-stopping ability which has put him at the pinnacle of goalkeeping for a many years. Nobody however expected the manner in which Ederson would challenge de Gea this season, to the point where he may himself stake a claim to being the best goalkeeper of the modern era. At
the very least, Ederson is forcing us to question our standards and criteria for modern goalkeepers.

Guardiola clearly wanted a ball-playing goalkeeper last summer. In Benfica’s Ederson he acquired a player whose distributive qualities would suffice on a central midfielder. He played at left-back in his youth, but his passing and vision could not mask his lack of fitness, so he became a goalkeeper. He is equally natural when pinging laser-guided passes towards extremities of the pitch to stretch the opposition, or shifting the ball around his back-line, allowing for build-up play.

Ederson is forcing us to question our standards and criteria for
modern goalkeepers.

There is, of course, method to Ederson’s distributional madness, which stands at a league-topping 87% accuracy. He relies on a team where players will readily shift positions to maximise space and attacking opportunities. This comes down to Guardiola’s tactics. City set out in a 4-3- 3, with Fernandinho in the middle of the midfield three often dropping between the lines whilst City’s centre-backs split either side of Ederson, allowing their full-backs push up. This means the defence can outnumber a three-man press (most recently attempted by Basel and Everton) by using Ederson as a spare man who then can play a direct vertical pass to Fernandinho. The ability to break such well-organised presses with simple passes is an equal testament to Ederson as a footballer, and Guardiola as a tactician.

Although Ederson prefers to play short (his average pass length 28m to de Gea’s 43m), if City cannot play through a press, they often drop deep, luring the opposition in and creating pockets of space between the lines where Ederson can fire the ball. Then, either the midfielders or wingers can gather the ball and launch a quick attack. It sounds simple, but it relies on Ederson’s extremely accurate, well-weighted long passes. Ederson’s pass to Sané against for Jesus’ goal versus Everton was a perfect example of this. He is also a more than competent shot-stopper capable of making crucial saves, as his double-save in the first game against United showed. Whilst his mean 2.09 saves per goal is a disappointing for a top keeper, when you account for the way City play, being able to build from deep consistently is more valuable than being the best shot-stopper. This philosophy seems to be becoming increasingly prevalent in today’s game. Footballing ability and a passing philosophy seem to be the chief motivators for Gareth Southgate’s preference for Pickford as England’s no.1 for the World Cup.

The mighty David de Gea stands in opposition to this, who has built his career on being an exceptional shot-stopper. This season, Manchester United have conceded almost double the number of clear chances than City and yet they have conceded only one more goal. This is due to the ability and reactions of their goalkeeper who has pulled of several memorable saves, such as the cat-like reflexes which denied a ferociously accurate header from Agüero in the 89 th minute against City. Moments like this make de Gea’s skillset more invaluable than any other goalkeeper’s. With an average of 4.00 saves per goal, almost double Ederson’s, who cares about his 61% distribution accuracy?

The mighty David de Gea has built his career
on being an exceptional shot-stopper.

de Gea’s qualities, however, are naturally far more conspicuous than his rival’s. People will remember de Gea’s save, but they won’t remember the fact that his miss-hit long pass that directly lead to City’s opener. This comparative lack of footballing ability has a tangible affect on results. Whilst it must be admitted that a lot of the blame can be attributed to United’s team and tactics, which are set up to play long balls from the back rather than the short pass, de Gea’s long distribution should really have been better.

So, perhaps Ederson is the goalkeeper of the future. But he still needs time to develop as a shot-stopper before he can fully depose de Gea. This season, only one man has managed to successfully marry both aspects of goalkeeping: Barcelona’s Marc-André ter Stegen. With his his average saves per goal at an astounding 4.31 and his distribution at a superb 84% he combines de Gea’s shot-stopping prowess and one-on- one ability with the libero-style ball-playing of Ederson.