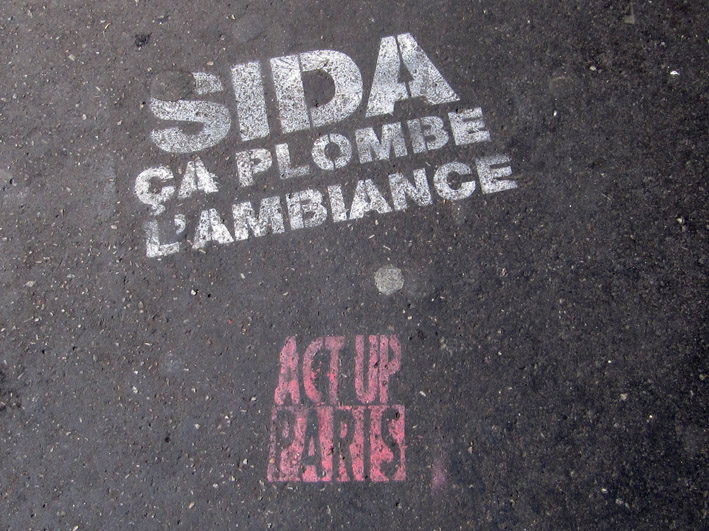 120 BPM opens with a weekly meeting of the AIDS activist group ACT UP-Paris on which the film centres. Sophie (Adèle Haenel), one of the lead organisers, introduces the group: ‘On est ACT UP-Paris’ (‘We’re ACT UP-Paris’). It’s strange to hear the name of the famous AIDS activist group in a French accent, a strangeness which highlights how depictions of AIDS activism in cinema have so far centred on the American struggle. Director Robin Campillo, who was himself a member of ACT UP-Paris in the ‘90s, has undoubtedly succeeded with this French contribution to cinematic accounts of AIDS activism, in which he brings to life the tragedy and beauty of this most personal and political struggle.

Under another director, most of the activist group’s meetings and protest actions might have been glossed over in a montage, only there to support the key moments of victory and defeat. But in 120 BPM, the long weekly meetings in a lecture theatre form much of the film. The arguments, tensions, raised voices are all here, punctuated by the clicks of approval and hisses of disagreement that replace clapping and booing in this process designed to reach democratic decisions as efficiently as possible. It’s a rare insight into how organised yet messy activism can be. Campillo shows the satisfyingly dramatic protests at pharmaceutical companies and conferences, with liberal fake blood, loud chants such as ‘Melton Pharm, assassins!’ and literal whistle-blowing. But he also lingers on the disagreements these actions provoke, as members have different views on whether handcuffing a health minister counts as violence, and how much of the action is unplanned: the unexpected throwing of a blood-filled balloon was due to a young member’s nerves, not radicalism.

This investment in showing the group’s working process enables Campillo to simultaneously touch on a variety of experiences of living with HIV. In the group’s discourse, members frequently draw attention to the needs of ‘les toxicos, les prostituées, les étrangers’, which the government is failing to address. Drug-users, sex-workers and foreigners are not in fact well-represented in the meetings or the film as a whole, but Campillo still succeeds in showing a range of reactions to the AIDS crisis, from gay men who live with HIV, have sworn off sex or just don’t want to think about it, to a teenage haemophiliac who contracted HIV through contaminated blood transfusions, and his mother who accompanies him to meetings, to a trans woman who speaks briefly to raise attention to the need for research into the interactions between treatments and hormone therapy.

The film’s focus gradually rests on the relationship that blossoms between Nathan, a quiet newcomer played by Arnaud Valois, and Sean, whose anger, sadness, lust and humour as his health deteriorates are portrayed movingly in an incredible performance by Nahuel Pérez Biscayart. By concentrating on Sean’s personal experience of HIV/AIDS, as well as touching on several other character’s stories, Campillo ensures that people living with HIV/AIDS are not reduced to one-dimensional receptacles for pity and manages to show their key role in agitating for change, as well as the nuances of living with the disease.

…despite its moments of individual tragedy, it is a film filled with life.

In some ways, Sean is very much defined by his illness. When Nathan asks him what he does in life, apart from ACT UP, Sean laughs and responds that he’s ‘séropos’, HIV-positive, and that’s all. Nathan’s question seems to betray that he hasn’t quite grasped ACT UP’s culture, how for most of the people within that space the fight against AIDS is their life. The film’s consistently tight framing enhances this sense of almost being trapped in the situation, as shots of die-ins fill the screen. There are very few exterior shots of the buildings where the action takes place, and, for a film set in Paris, very few identifying shots of the ‘city of lights’ itself. One of the rare occasions in which the city becomes recognisable, as Sean, Nathan and several other male activists catch the metro home after having been arrested at a protest, Sean looks out of the window as the train crosses over a Seine lit by the setting sun. He reflects in a short monologue on his life since he caught HIV: in some ways, his life has started since then; he lives things more intensely, the colours brighter. He pauses, then says, ‘I’m joking, don’t worry.’ The others laugh, and the moment is lost.

It’s a naturalistic way of incorporating a reflection on Sean’s life with HIV; he may be stuck on a journey he didn’t plan for, but he’s still looking out the window, at life. In hospital, although depressed by his state, he still stares out at the corner of blue sky he can see from his bed. When Nathan arrives, despite their change in circumstances from the earlier scenes of dark discos and steamy sex, their desire remains. Nathan gives Sean a handjob; he comes, together they laugh, he cries. This reminder of life in the face of death epitomises Campillo’s success in 120 BPM: despite its moments of individual tragedy, it is a film filled with life.

Do Look Back in Anger: Oxford takes Edinburgh by storm

Pitching a capella: In The Pink