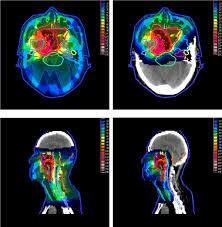 I was eleven years old, having treatment for a brain tumour and mildly obsessed with the Tennessee band Kings of Leon. Each radiotherapy patient could listen to an album of their choosing. There were few audacious music choices. One daring eight year old had asked for a Queen album, but according to the Radiotherapists, the tunes were generally limited to an assortment of Frank Sinatra tracks from elderly patients. “Aha Shake Heartbreak”, Kings of Leon’s second album, apparently came as a breath of fresh air.

In the radiotherapy room, the situation was made as comfortable and bearable as possible by the staff. This included playing an album of my choosing over the speakers during the radiotherapy treatment, and displaying a selection of images to stare at while I laid down face first on the board in my plaster of Paris mask. Although I had a range of pictures to choose from in my selection, including a Blade Runner poster, for some reason I usually decided that a picture of a border terrier puppy was more appropriate.

Even the smell of the radiotherapy laser (yep, that’s a thing) wasn’t too much of a problem when I had the Tennessee drawl of Caleb Followill pumping through the speakers.

“Aha Shake Heartbreak’s” first track “Slow Night, Slow Long” felt like a particularly apt introduction to the radiotherapy session; the first time took around three hours to set up and complete, and I don’t recall any subsequent session being shorter than forty five minutes. But even the smell of the radiotherapy laser (yep, that’s a thing) wasn’t too much of a problem when I had the Tennessee drawl of Caleb Followill pumping through the speakers. What I love about the album – as well as “Youth and Young Manhood” and “Because of the Times – is the fact that often you can’t hear what Followill’s saying at all. If you manage to understand every lyric in “The Bucket” on your first listen – or even the fifth – then I doff my metaphorical hat to you.

And sometimes in Followill’s lyrics, there doesn’t even seem to be any definable language. “Milk” is probably the key example – Noel Fielding even decided to send this track up during his 2008 Mighty Boosh tour with Julian Barrett, despite having directly praised “Aha Shake Heartbreak” in the TV show’s second season. But maybe that was part of the album’s appeal for me at the time – when you’ve got your head forced into a mask with just about adequate breathing space, the last thing I wanted to do is spend time pondering and analysing each individual line.

Although I must have listened to the same album over fifty times in the space of six weeks, it never got tiring; even the more ‘aggressive’ tracks like “Four Kicks” seemed to take on a weirdly calming tone after repeated listenings, and the order of each song was just about embedded in my mind. “Aha Shake Heartbreak” is also the only Kings of Leon album to garner the honourary ‘Parental Advisory’ label, but that wasn’t a huge problem. In between the mostly vague lyrics, it was nice to be met with some familiar diction.

The bonus track “Where Nobody Knows” also happens to be a fittingly-named conclusion to a classic album. I can’t say I ever understood how a tiny laser with a questionable odour managed to neutralise a tumour, but when you’ve got the Followills singing out of the speakers for a couple hundred hours, it doesn’t really matter.