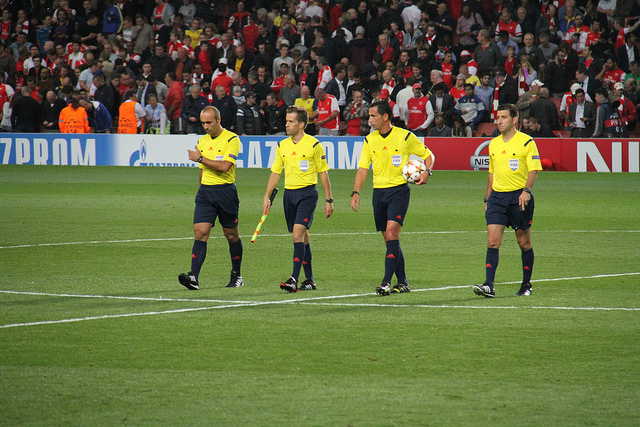 Mark Hughes, at the end of Southampton’s crucial game with Everton (which ended 1-1, sadly for the Saints) came forward in his press conference and openly criticised the refereeing decisions which, he argued, cost him the win. His tone was not fiery or passionate. He was beleaguered, saying: ‘at this level, it isn’t right to be worried about whether or not referees and officials will play a part’. It was the sound of a man who has felt this way far too many times in the past.

Complaining about the referee seems to be somewhat of an art in this country. Arsène has done it for over twenty years, Mourinho has made it his mantra. Why then, when such an obvious solution to the problem as VAR is available, do we continue to indulge these gripes and grumble? It’s as if there is something in English football culture that’s apathetic towards the objective truth, and would rather sustain the narrative of aggrieved or fortunate managers. I think it’s time that changed.

After a year of institutionalised VAR, I have little doubt that referees the VAR referees themselves (known as AVARs) would find a rhythm.

There are so many arguments for why we should reject VAR in the Premier League, the main one being through overuse from referees or a time delay for a decision, VAR would kill the atmosphere in the ground. For this reason, there is uncertainty about whether VAR will be used in the upcoming World Cup.

The FA cup first trialled VAR after the technology had proved successful in the French and German Leagues. However, all the potential problems in the VAR system came to a head when Tottenham hosted Rochdale in February in the FA Cup 5th round replay.

The game hardly showed VAR in a favourable light. Son Heung-Min was shown a yellow card for ‘feinting’ during a penalty, and his team-mate Fernando Llorente was adjudged to have fouled a defender in the build-up to Erik Lamela’s disallowed goal. The referee, Paul Tierney, added on 6 minutes of stoppage time for video review delays, and fans booed as the half-time whistle was blown.

From the first VAR call seven minutes into the game, the referee lost all his confidence and reviewed almost every decision. None of the goals were being celebrated by the end of the match. Fans and players alike were complaining about the atmosphere VAR created.

It certainly was odd. As the ball rippled the net, it wasn’t met by rapturous cheers but a half-hearted ovation followed by palpable anxiety around the ground as everyone watched the referee to see what he signalled. Even when goals were then given, the celebrations were watered down. After the game, Mauricio Pochettino called the system ‘unhelpful’ and ‘embarrassing’, and accused VAR of removing the ‘emotion’ from football.

But VAR was always going to have teething problems. It was thrust upon referees who had spent their whole careers making standard subjective calls. The temptation to find the real answers at every point must have been so high, with relatively tiny amounts of experience with the system. After a year of institutionalised VAR, I have little doubt that referees the VAR referees themselves (known as AVARs) would find a rhythm.

There is no doubt that football is more subjective than a lot of other sports that use some variant VAR , but the idea isn’t to create a perfect system.

The time-delay factor, and its effect on the stadium-audience is certainly a scary one. Atmosphere created by fans is part of what makes football such a special game. However, this is easily circumvented by having live decisions and review shown on big screens to the crowds and players.  Diluted post-goal celebrations would be replaced by a communal emotional roller-coaster as the right decision unfolds in front of everyone’s eyes. One only has to spend a day at Lord’s watching test cricket to feel the excitement of a review on the big screen: it’s often as thrilling as a wicket itself, uniting a crowd in a totally unique way. Indeed, FIFA have promised this for the World Cup.

With this in mind, some pundits still advocate a subjective approach to football. There is no doubt that football is more subjective than a lot of other sports that use some variant VAR , but the idea isn’t to create a perfect system. Surely the aim is purely to bring the percentage of correct decisions up. DRS brought correct decisions from 94% to 98% in cricket, and no one is quibbling that 98% is too low. Increasing the percentage of correct decisions must necessarily be the right move, and it won’t take long for the crowd and officials to make VAR their own.

From Les Bleus to Les Misérables: how England can make France weep